The Real Winnie the Pooh

A. A. Milne’s iconic classic, Winnie the Pooh, the collected tales of a stuffed-bear-come-to-life and his friends, was one of those books I was most excited as a new parent to read to my children. I still have the copy that once belonged to my own mother and her brothers: a water-stained hardback with their own handwritten improvisations along the way.

While I vaguely recollect reading and enjoying this classic as a child myself, I’ll admit that my more prominent memories are of decorating friends’ yearbooks with A.A. Milne quotations (“We’ll be friends forever, won’t we, Pooh?” said Piglet. “Even longer,” Pooh answered.) Pooh and his friends, it seems, have an enduring resonance.

When it came to cracking the spine on this treasure for my firstborn, I didn’t anticipate how surprisingly sophisticated A.A. Milne’s writing is. I first tried to read Winnie the Pooh to JP when he was only three and a half. Big mistake. The dry humor was over his head (it’s hard to find Owl’s misspellings funny when you don’t know how to spell yourself); and the sudden jumps in narration were jarring (one minute we’re in the 100 Acre Wood, the next we’re in Christopher Robin’s bedroom hearing about the 100 Acre Wood). I would be erupting in giggles, while JP would be eyeing me as if to say, This is funny why?

We tried again when JP was six, with much greater success, although I think the beauty of Pooh (in the vein of other classics, like The Little Prince) is that it can be re-read at almost every age from here on out for different gain. The 100 Acre Wood is like a microcosm for the world. In it, we encounter the same personalities that we do on the outside. Look at bossy pants over there, hopping around like ‘ol Rabbit. Cool it with the Kanga-like cheerleading, kay? I need a lunch date with my Piglet.

One might argue that, at the heart of this microcosm, is Pooh bear himself, the lens through which the child reader sees the world. Pooh is the very embodiment of childhood innocence. He spends his days moving through states of befuddlement, hunger, distraction, anxiety, and discovery. He’s Every Child. As much as we observe and chuckle over what Pooh’s friends are doing, we feel what Pooh feels.

Today, 89 years after A.A. Milne published his classic, we are being treated to a new picture book that will likely be as mind blowing for your children as it is for mine. WINNIE THE POOH WAS REAL. That is, there was once a real live bear named Winnie. A bear who was adopted by a World War One veterinarian and named after the soldier’s Canadian hometown, Winnipeg. A bear who became the Mascot of the Second Canadian Infantry Brigade and kept the soldiers’ spirits high in training camp. A bear who, when the soldiers were shipped out to France, eventually came to reside in the London Zoo. A bear who was visited every day in the zoo by a little boy named Christopher Robin—along with his father, the aspiring writer A.A. Milne.

A bear who was—drumroll, please—a female.

That’s right: as Lindsay Mattick chronicles in her irresistibly charming new picture book, the inspiration for Milne’s Pooh was, in fact, a female Canadian-British bear named Winnie, whom Milne’s son adored and played with at the London Zoo for many years (and for whom he named his own stuffed toy bear).

It’s the backstory of how Winnie came to the zoo that takes center stage in Finding Winnie: The True Story of the World’s Most Famous Bear. Author Mattick has a personal connection to this story: she is the great-granddaughter of Captain Harry Colebourn, the veterinarian-soldier who initially befriends Winnie outside a Canadian train station on his way to care for the horses in the Army’s training camp. The book is actually framed as a bedtime story, which Mattick herself is delivering to her own eager son, so that he might learn about his great-great grandfather.

Captain Harry’s relationship with Winnie is love at first sight. He parts with twenty dollars (a lot in those days, Mattick explains to her son) to purchase the Bear from a trapper at the train station. At first, the Captain’s entire regiment is horrified: “We are on a journey of thousands of miles, heading into the thick of battle, and you propose to bring this Most Dangerous Creature?” But Henry’s heart makes up his mind for him: “There is something special about that Bear,” he professes to himself.

My children go mind-blown-crazy for true stories, although it’s rare that I can find one that’s as interesting to my eight year old as it is to my five year old. My oldest is obsessed with trying to understand what war looks like; my youngest just wants sweet stories about animals. This book manages a bit of both: it gives behind-the-scenes glimpses of World War One, alongside humorous anecdotes of the pet Bear’s insatiable appetite, playful antics, and avid curiosity.

Finding Winnie’s broad appeal is in no small part owing to Sophie Blackall’s soft yet stirring ink-and-watercolor illustrations. Have I mentioned my obsession with Blackall? Her art is at once feminine and masculine; at once nostalgic and fresh. Her play of color and light infuses emotion into every single detail. In short, her touch is pure magic (heck, she got me to love a story about wrestling back in 2013!). She could illustrate the Dictionary and I’d probably walk around hugging it to my chest. 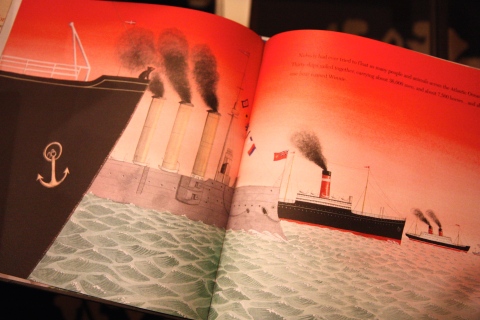 All love stories have bittersweet moments, and Harry ultimately makes the difficult decision to bring Winnie to London, where he will be safe from the front lines of war.

“There is something you must always remember,” Harry said. “It’s the most important thing, really. Even if we’re apart, I’ll always love you. You’ll always be my Bear.”

But where one love story ends—Mattick reassures her son—another begins. The book goes on to explore the playful relationship between Winnie and Christopher Robin in the early 1900s. It’s not long before Christopher Robin is granted permission to enter Winnie’s enclosure and ride on his back (apparently, zoos are not what they used to be).

But what about Harry? Cole asks his mother, returning our focus at the end to Winnie’s first family. Mattick explains how Harry returned safely to Canada after the war and started a family of his own, of which Cole is now a part. My children like to trace their fingers over the Family Tree, a visual which makes it all the clearer the role that the different characters in the book indirectly play in Pooh’s story.

The book’s final four pages are made to look like excerpts from Maddick’s own family album, including actual black-and-white photographs of Harry and Winnie, an excerpt from Harry’s journal on the day he adopted Winnie, and the original Animal Record Card that shows the day Winnie was checked into the London Zoo. All proof, my son was quick to point out, that this story actually happened.

What is left to pure speculation is why A.A. Milne changed the sex of the real bear when making up stories about the pretend bear. Perhaps that secret will forever rest between him and his son (a fourth love story of sorts). Still, I don’t mind not knowing. I’ve often thought that the discussions my children and I have while reading together are as interesting as the books themselves.

But I must run. My kids and I have a date with one Pooh bear and a water-stained hardback that has been passed along for generations.

Review copy provided by Little Brown. All opinions are my own. Amazon.com affiliate links are provided mainly for ease and reference–although I prefer that we all shop local when we can!

§ 8 Responses to The Real Winnie the Pooh

You are currently reading The Real Winnie the Pooh at What to Read to Your Kids.