This past Monday, I watched and cheered at my computer as the American Library Association’s Youth Media Awards were announced (more fun than the Oscars for #kidlit crazies like me). Most parents are familiar with the Caldecott and Newbery medals, but there are quite a few other awards distributed, many to recognize racial, cultural, and gender diversity. Overall, I was pleased to see many of my 2018 favorites come away with shiny gold and silver stickers. At the end of today’s post, I’ll include some of these titles, along with links to what I’ve written about them.

Today, I want to devote some space to Sophie Blackall’s Hello Lighthouse, which came away with the Randolph Caldecott Medal, for the “most distinguished American picture book for children.” (It’s actually the second Caldecott for Blackall, who won three years ago for this gem). Hello Lighthouse (Ages 6-9) is one of my very favorites from last year; and yet, I haven’t talked about it until now. Why is that? Perhaps because the art in this book is so endlessly fascinating, my observations continue to evolve with every read. I suppose I’ve been at a loss for words.

My children have returned to this book many times, too, although their initial reactions persist. My daughter loves the idea of living in a lighthouse, while my son thinks it sounds like a most terrifying pursuit (“Do you think the waves really get as big as that?” he says, every single time.) One can gleam quite a bit about their differing personalities from these reactions.

Growing up in Manhattan, one of my favorite pastimes was to walk four blocks uptown to the Museum of the City of New York, climb the marble staircase, and gaze inside the miniature rooms of historic dollhouses, decorated in various styles from the first half of the twentieth century (only the well-known Stettheimer Dollhouse still remains). It wasn’t just the old-fashioned décor—the ornate porcelain table settings with tiny silver forks; the canopied beds with imposing walnut posts—that captivated me. It was the romantic notion of seeing into another world—a perfectly ordered one at that—and imagining what it would be like to inhabit these rooms from a distant time.

This memory was the first thing that came to mind when I opened Hello Lighthouse. The story itself is an (equally romanticized) window into life inside a lighthouse, back when lighthouses were operated by human keepers, who lived out their days ascending and descending these narrow circular towers miles from civilization, before their job was rendered obsolete by automation. As Blackall reveals in her fascinating Afterward, she spent years researching and visiting historic North American lighthouses, from New York to Newfoundland. Her passion for the subject matter radiates from every spread in the spectacular end result we hold in our hands. 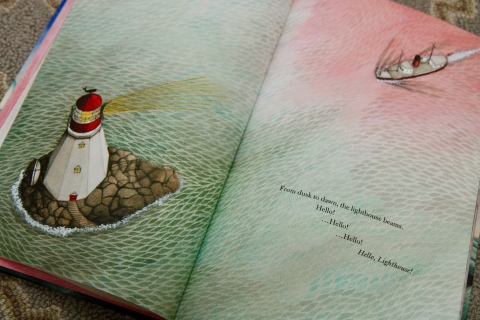 Beginning with its tall, narrow trim size, Hello Lighthouse is an homage to these beacons of light, there “sentinels” standing guard and guiding ships around dangerous rocks. But it is also an homage to the life of a lighthouse keeper. To the discipline, the danger, and the loneliness. To the magnificent, changeable beauty which comes from the sea and the sky. To the light which must always be kept burning. 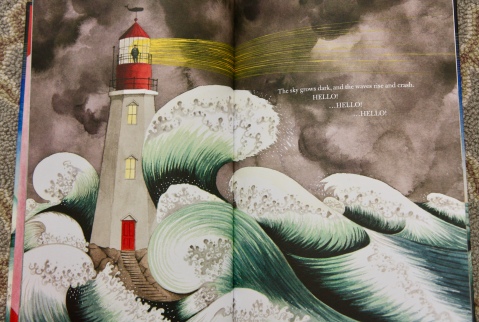 In the book’s early pages, the (fictional) keeper lives alone. We watch how he passes his days, steadfast in his near-constant rituals of polishing the lens, refilling the oil, trimming the wick, winding the clockwork, logging the book. Idle time is spent giving the walls a fresh coat of paint (in the Afterward, Blackall mentions how frequently interior walls needed to be repainted, given the wear and tear of the salty air), embroidering, boiling water, or “fish[ing] for cod from the window.” For correspondence, he pens letters, folds them into bottles, and throws them into the water to traverse the seas. 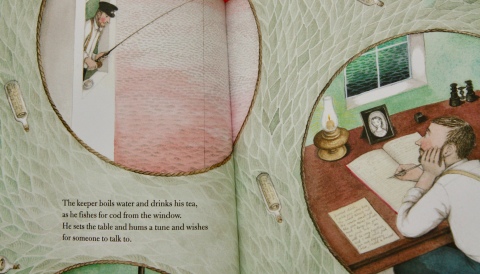 The letters, as it turns out, are for his wife, who arrives one day by tender (along with the predictable shipment of oil, flour, pork, and beans) and is shimmied up the rocks to the base of the lighthouse by means of a cable and pulley. That night, when the keeper “tends the light and writes in the logbook,” he also “sets the table for two.” 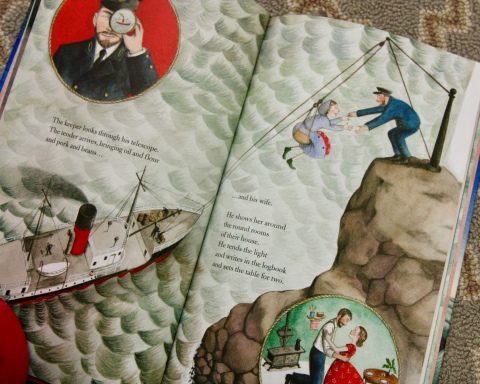 These everyday moments might feel mundane to the lighthouse keeper, but they become positively enchanting when viewed—like the dollhouses of my childhood—through Blackall’s circular windows, which populate many of the exquisite spreads. But the real wonder of Hello Lighthouse is the way Blackall nudges us from the passive to the active, from peeker to participant. At every turn, she infuses her illustrations—Chinese ink and watercolor on hot-press paper—with an exuberance of movement. This movement on the page is so encompassing, so effective, that we as viewers cannot help but experience in our own bodies some of what it was like to inhabit a lighthouse. To face off against the elements. To reside all day and night in cramped, narrow, circular spaces. 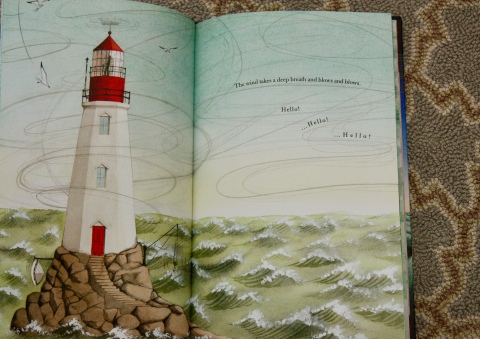 To begin with, there’s the movement of the wind and waves, the external forces acting upon the lighthouse at different times of day, in different seasons. Even on calm days, Blackall’s brushwork makes the water ripple on the page. In the fiercest of storms, the waves toss shipwrecked bodies and remind us of the dangerous rescues a lighthouse keeper must sometimes perform.

Then there is the circular movement of the lighthouse’s interior, where circular rooms are populated by circular shapes like rugs, candles, and bowls. There is the movement of the spiral staircase, which takes its inhabitants from the bottom of the lighthouse to the top, then down again, all day long. In one of my kids’ favorite spreads—one that purposely produces in the reader an almost vertiginous effect—Blackall manages to show both the keeper, ill and bedridden in his bedroom of circles, and his wife, running up and down the spiral staircase to tend to her husband and the lighthouse “all at once.” (This spread is also an homage to the many women who served as lighthouse keepers, another point Blackall makes in the Afterward.) 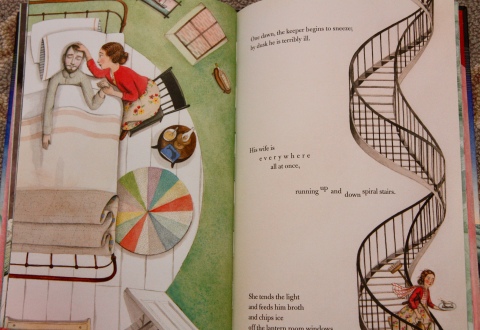 In one of my favorite spreads—perhaps best appreciated by one who has herself been pregnant—the circle is invoked as a symbol of the wife’s labor, a labor which has her walking in seemingly endless circles, as her husband “boils water and helps her breathe in—and out” (and, of course, still “tends the light and writes in the logbook”).

Blackall occasionally startles us with an absence of movement, like when ice encapsulates the water around the lighthouse. This spread feels almost eerily still, sitting as it does in such contrast to the others. And yet, there is still movement to be discerned: the lamp continues to radiate its light out into the stillness.

Fittingly, Blackall also gives us a tiny window into what life would have been like for a child inside the lighthouse. The couple’s child, now two or so, sits perched on a circular rope rug, surrounded by a ring of model boats and her working parents. The child looks happy enough, but we know enough of the daily reality of this lighthouse to imagine it would be challenging growing up in such close quarters. The coast guard’s forthcoming arrival with a new automated motor for the lighthouse seems perfectly timed. It is the changing of the guard, only out with the human and in with the machine. The child will get to watch the lighthouse, not from within its circular rooms, but from her new home across the shore. (And I don’t dare ruin the final few spreads for you.) 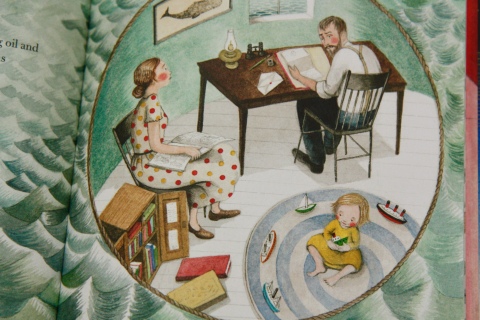 Hello Lighthouse is escapism at its best, painting an unfamiliar world, then inviting us to step inside and get to know every corner as if it were our own.

Other 2019 YMA Award Winners That I’ve Loved AND Reviewed:

Julian is a Mermaid, by Jessica Love (Stonewall Book Award, for an “English-language children’s book of exceptional merit relating to the gay, lesbian, bisexual and transgender experience”)

Fox and Chick: The Party and Other Stories, by Sergio Ruzzier (Theodor Seuss Geisel Honor, for “most distinguished early reader book”)

The Season of Styx Malone, by Kekla Magoon (Coretta Scott King Honor, “recognizing an African-American author of outstanding books for children”); link is to my Instagram review

Sweep: The Story of a Girl and Her Monster, by Jonathan Auxier (Sydney Taylor Award, “presented to outstanding books for children and teens that authentically portray the Jewish experience”)

Did you enjoy this post? Make sure you don’t miss any others! Enter your email on the right hand side of my homepage, and you’ll be guaranteed to receive a new post in your inbox 3-4 times a month. Plus, follow me on Facebook (What To Read To Your Kids), Twitter (@thebookmommy), and now Instagram (@thebookmommy), where I regularly post articles and updates on what my kids are reading to themselves.

Hello Lighthouse published by Little, Brown and Company. All opinions are my own. Amazon.com affiliate links are above, although I prefer that we all shop local when we can!

§ One Response to Hello, Awards Time!

You are currently reading Hello, Awards Time! at What to Read to Your Kids.