Sharing a Love of Travel (A Father’s Day Post)

This Father’s Day, my own father will have been gone for twenty-six years.  Twenty-six years. One of the most devastating things about losing a parent when you’re eighteen is that you never get to know that parent through an adult lens. I knew my father intimately, from his scratchy mustache to his eye-rolling wisecracks to his endless patience as I described every painstaking detail of my day. But I knew him as a child knows a parent. How I wish I could have known him as an adult.

In times of great upheaval and unrest, I feel my father’s absence most keenly. Every seismic shift in our world puts that much more space between him and me. How would he be participating in this national conversation about race? Would he be marching with a Black Lives Matter sign? What candidate would he have supported in the last Democratic primary? How would social distancing have impacted his life in retirement—or would he still be practicing law? What kinds of things would he enjoy doing with his grandchildren?

I can’t pretend to know the answers to these questions, though I ask them quietly to myself all the time.

What I do know is that there are certain things which always bring him back to me. And one of them is travel. My father’s love of travel was legendary. When I was very young and he would travel internationally for work, he’d always bring me souvenirs—usually dolls—from places like Brazil, Mexico, and Germany. I loved gazing at the tiny porcelain faces or printed fabric clothes and imagining where they had been. Our house was full of black-and-white photographs from before my time: my father on a camel in the Sahara, my father on a motorcycle in Greece. When I decided to spend a gap year in Vietnam after high school, he jumped at the chance to accompany me across the ocean. When, weeks later, it came time for him to return to the States, his parting words were, “It looks like you’ve got the travel bug now, too.” I beamed with pride.

It seems fated that I would fall deeply in love with Jenny Sue Kostecki-Shaw’s new picture book, Papa Brings Me the World (Ages 3-7), in which a young girl describes her affection for a father who travels the world and brings pieces of it back to her. I’ve long been a fan of Kostecki-Shaw’s (my daughter still pulls out Luna & Me), but this book positively transported me. Maybe because it’s inspired by the author-illustrator’s own father; maybe it’s because the theme of found objects lends itself beautifully to mixed-media collage; or maybe it’s because the voice of the little girl reminds me of my young self, brimming with tenderness and curiosity and admiration and longing for my father’s stories of adventure.

I hadn’t even gotten to the title page before I was already in tears.

When we first meet Lulu and her papa, the former is tucking “tiny love notes” into her papa’s pockets, as he prepares for one of his trips and she bids him a wet goodbye. (Now we realize the picture above was actually one of these notes.)

Despite tears at her father’s departure, Lulu explains with pride: “Most parents drive a car or ride a bus or train to work—but not my papa. He navigates mountains, deserts, and oceans. My papa is a photojournalist. His pictures and stories are windows into magical worlds. Papa says he was born to explore.”

No matter where Papa goes—and a whopping 25 countries are alluded to by the end of the book (the final page charts them all on a world map)—he returns with keepsakes for his family, little windows into the fascinating cultures he has experienced. His pockets never fail to bring back “treasure troves of silver and gold,” and Lulu’s favorites are the coins with holes through the center. But Papa brings back larger items, too, like an abacus, or “ancient calculator,” from China, which Lulu and her mother use to count the stars as they wait for Papa’s next return; a mbira, or “thumb piano,” from Zimbabwe; and a “driftwood dragon” scavenged from a beach on the Irish Sea.

As much as Lulu relishes these treasures, she longs for the day when she’ll be old enough to accompany her papa on his trips. Her impatience occasionally gets the best of her: “I’m coming with you!” But Papa continues to tell her she’s not ready yet; “Until then, I’ll bring the world to you.” In these talks, Papa’s “eyebrows stand tall like openings to caves”—an expression I adore as much for my own father’s bushy eyebrows, as for the way a child can look into a parent’s eyes and see endless possibility. (Also, Lulu is sporting her papa’s hiking boots, because is there anything more universal than a child clomping around in her parent’s shoes?) 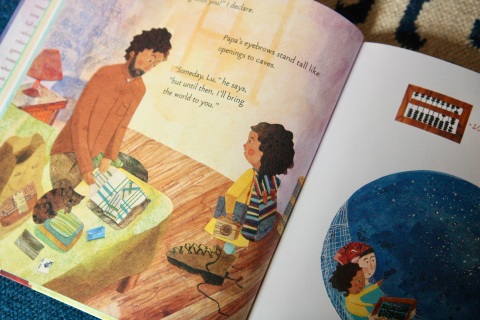 One of the many gifts of Papa Brings Me the World is the message that you don’t have to travel in person to different corners of the world to glean insights into what life might be like there—or even to discover commonalities. Papa teaches Lulu a game he learned from children in Sumatra, a variation of “Rock, Paper, Scissors” involving an ant, a person, and an elephant; and he sets up a pen pal for her while he’s in Mexico (“he sent me a new friend in the mail!”).

Still, Lulu must find a way to pass the time while she mourns the absences of her papa. Sometimes, she does this by picturing him trying to fall asleep while she’s in bed. Other times—and this may be my favorite spread—she imagines herself into the pages of his many travel journals. She dances with penguins in the Galapagos Islands. She flies kites in India. She hops the onion domes in Moscow. Here, Kostecki-Shaw’s collages are as fanciful as they are tactile; indeed, they look almost three dimensional.

Anyone who has missed a parent and then awakes to find them kissing their forehead knows the sweetness of reunion, and Kostecki-Shaw captures this sensation perfectly. Lulu relishes the scent of her papa—“He smells sweet and salty. Like the world”—and can’t take her eyes off his face as he wraps her in his arms to tell her a story of losing his way in the Andes Mountains and finding it again. Lulu is surprised to hear her papa is sometimes afraid, her understanding of him deepening with each moment they share together.

Then, one day, Papa brings her the most special surprise of them all. It’s a book. “‘But Papa,’ I say, ‘it’s blank.’” The time has come for Lulu to fill her own pages. As Lulu realizes the significance of this gift, she throws her arms around her father. “Finally, someday is here, and I’m crossing the oceans with Papa.”

In the book’s final pages, Lulu’s voice drops off. We are left with a wordless spread in which father and daughter walk hand in hand into a rising or setting sun, followed by excerpts from Lulu’s emerging travel journal, a smattering of visual clues to glean where she has gone and what she is doing. Lulu’s story to us is through. She is embarking on a new story, one in which she moves from listener to participant.

For as much as Papa Brings Me the World promises a lifetime of adventures (“I was born to explore. Just like Papa”), it also reminds us that the bond we share as young children with our parents is both precious and fleeting. We’ll gladly share those adventures as long as we can, but at some point, someday, we’ll have to journey on alone.

I’ll keep traveling, as much to keep the memories of my father close as to pass on that love to my children.

Books published by Henry Holt and Company. All opinions are my own. Amazon.com affiliate links are used, although I prefer we all shop local and support our communities when we can.

You are currently reading Sharing a Love of Travel (A Father’s Day Post) at What to Read to Your Kids.