“EVERY SINGLE EARLY READER BOOK IS BORING! NOT ONE OF THEM IS FUNNY!” my daughter blurted out in the middle of a (completely unrelated) dinner conversation two years ago. For months, she had been reluctant to practice reading and even more reluctant to talk about her reluctance. (True story: it wasn’t until her soul sister, Dory Fantasmagory, started going through a similar struggle that my Emily began to find words for hers.)

Never underestimate the power of humor to captivate a budding reader. I credit Mo Willems’ “Elephant and Piggie” series with kindling my older son’s desire to learn to read, but its seduction was largely lost on my daughter, who by the time it was her turn had been hearing those books read aloud (by her brother) for years. Thankfully, Willems went on to create an imprint of similarly-toned readers; and funny, offbeat stories by the likes of Laurie Keller, Charise Mericle Harper, and Dan Santat did bring a novel respite to my daughter’s gripes.

When I received a copy of Sergio Ruzzier’s Fox and Chick: The Party and Other Stories (Ages 5-7) earlier this year, my daughter—now a mature and prolific reader—snatched it up and announced, “Where was this book when I was learning to read? Mommy, do you remember how I told you there were NO funny early readers?” Yes, honey. Yes, I do.

As an early reader masquerading as a picture book, Fox and Chick has just about everything going for it: three short stories are illustrated as comic strips with occasional double-page spreads; the text is delivered entirely through speech bubbles; the vocabulary is largely phonetic; there’s sufficient repetition; and, best of all, it’s ripe with dry humor. (I would recommend it for a child who has been learning to read for a little while, but isn’t ready to move into early chapter books.) It also stars a pair of anthropomorphized animals every bit as quirky and different from one another as some of children’s literature most memorable duos (after all, before there were Elephant and Piggie, there were Frog and Toad and George and Martha).

The first story, “The Party,” serves as a perfect introduction to Fox and Chick’s personalities, best showcased when played off one another. Fox—restrained, meticulous, and borderline cantankerous—is less than thrilled when his book reading is interrupted by Chick’s incessant knocking. Chick—exuberant, impulsive, and stater of the obvious (“How can you be reading that book if you are talking to me?”)—is merely asking if he can use the bathroom. “Of course you may.” “Thank you, Fox. Very kind of you.” 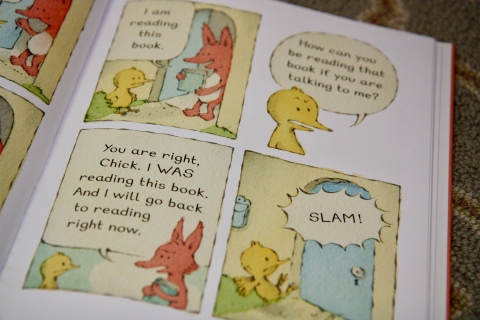 Fox attempts to lose himself in his reading once again, though he can’t help but notice the ticking of the clock: Chick has been in the bathroom for some time. “Chick, are you okay?…Chick, I am coming in!” Fox is horrified by the chaos he finds on the other side of the door. It turns out “May I use your bathroom?” meant “May I use your bathroom to have a party with my friends?” “In my bathroom?!” roars Fox. Chick responds, “Oh, I see…,” and he and his pals quickly exit stage left.

Though he may play the part of the party pooper, later stories reveal Fox has a wonderfully droll sense of humor. My favorite story has to be “Good Soup,” where Chick follows Fox around his garden as the latter collects vegetables for soup. Fox’s vegetarianism offends Chick’s world order. “Fox, foxes are supposed to eat field mice, not carrots!” To which Fox responds, “I don’t like to eat field mice.” 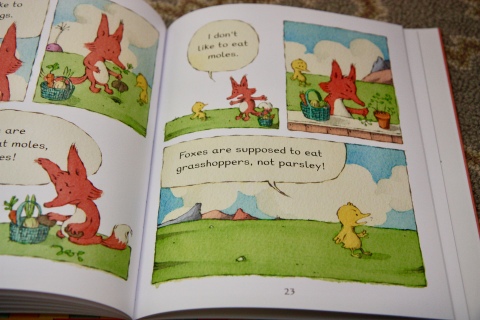 The more exotic the vegetable, the more adamant Chick’s protests become, until he walks himself straight into the trap which a clever reader will have been anticipating all along: “And they’re supposed to eat squirrels…lizards…and little birds.” “Little birds?” says Fox (is that a sly grin?). “Yes, Fox, little bir…Uh-oh.” Later, the two sit down to enjoy Fox’s soup. “I’m glad you don’t like to eat little birds, Fox.” To which Fox responds, “At least not today.”

If the success of series like Elephant and Piggie are any indication, there’s huge appeal in early reader texts that make use of conversational banter to tell their story. Kids like knowing that the hard-earned words coming out of their mouth have entertainment, even comedic, value. Now add in Ruzzier’s always charming, expressive illustrations, and I say, thank goodness Fox and Chick are only getting started.

Review copy by Chronicle Books. All opinions are my own. Amazon.com affiliate links support my book-buying habit and contribute to my being able to share more great books with you–although I prefer that we all shop local when we can!

§ One Response to Gift Guide 2018: An Early Reader to Celebrate

You are currently reading Gift Guide 2018: An Early Reader to Celebrate at What to Read to Your Kids.