Gift Guide 2018: The Elephant in the Room

This is mixed-media artist Pamela Zagarenski’s third year appearing on my Gift Guide (previously for this and this) and for good reason: there is a jewel-box quality to her picture books, their pages adorned with surreal and scintillating spreads destined for endless discovery. Her newest, Zola’s Elephant (Ages 4-7), written by Randall de Seve (whom I fell for long ago, when I used to sell The Duchess of Whimsy at my store), is every bit the treasure we’ve come to expect: a story of two girls, their pathway to friendship, and the phantom elephant which bonds them.

Zola’s Elephant may culminate in a new friendship, but it’s more about how difficult friendships can be to initiate. Especially when one of you is shy. At the heart of the story is a wild fabrication—created by our unnamed, red-haired narrator to mask her shyness—about the new girl, Zola, who has just moved in next door. The girls’ mothers have decided the girls “should be friends.” Except that our narrator knows Zola already has a friend. This is because she saw a large box being moved into her house. A box which can only mean one thing. An elephant.

Our narrator, herself an imaginative elephant aficionado, doesn’t need to go over to Zola’s house to picture exactly what she’s doing. “I know Zola’s feeding her elephant right now because I smell toast. Lots of toast.”

Never mind that the next spread reveals to the reader the actual situation over at Zola’s house, a familiar sight to anyone who has temporarily lost their parents to a mass of moving boxes.

And so it goes: our narrator delivers impassioned excuses for why she “can’t go make friends with Zola now”—Zola and her elephant are frolicking in a bubble bath; they’re playing hide and seek; they’re building a circus-themed club house (“I know because I hear hammering”)—and then the page turns reveal the stark, bored, lonely reality. 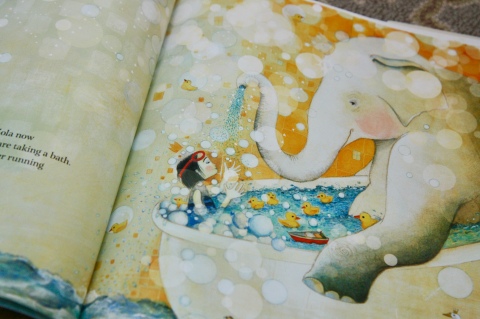 Ironically, the more our narrator tries to imagine away her hesitancy, the more she falls under her own spell. “I like stories…and clubhouses and playing hide-and-seek and taking bubble baths with elephants.” (An observant reader will note she has a stuffed elephant in her hands at the book’s beginning.) Perhaps she should walk next door and take a peek.

The spreads that follow, revealing not only what happens when the two girls meet, but how they end up making use of what was actually in the big box (spoiler: not an elephant), are a testament to how two imaginations can be better than one.

(Sheesh, you didn’t think I was actually going to show you. Something has to be kept a surprise for Christmas morning.)

Review copy by Houghton Mifflin Harcourt. All opinions are my own. Amazon.com affiliate links are above, although I prefer that we all shop local when we can!

You are currently reading Gift Guide 2018: The Elephant in the Room at What to Read to Your Kids.