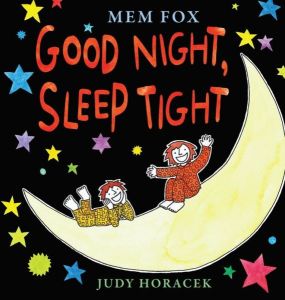 “How do I break the addiction to Goodnight Gorilla?!” a friend texted me the other day. Whether it’s Goodnight Gorilla, Goodnight Moon, or (my preference) Time for Bed, the lulling, reassuring refrains in these books become quick obsessions with little ones getting ready to tuck in for the night. And, let’s be honest, it can grow a wee bit tedious for the one doing the actual reading.

The good news is that, as your child’s attention span develops, you can start incorporating more involved bedtime stories into the mix. I’m not promising it will be love at first sight, and you may have to be a little sneaky (I’ve had great success with the “you pick one and I’ll pick one” approach as a way to introduce new titles). But help is on the way. 2013 has been a rich year for bedtime stories, beginning with Mem Fox’s Good Night, Sleep Tight (Ages 1-4), a small square hardcover illustrated by Judy Horacek—and an instant, no-tricks-necessary favorite with my Emily (the same team created the equally fabulous Where is the Green Sheep?).

Think of this new book as a compilation of six classic nursery rhymes (“Pat-a-cake, pat-a-cake,” “This little piggy went to market,” “Star light, star bright,” etc.), only woven into an actual narrative and with a refrain to boot! How are such disparate poems tied together? By the simple premise of a boy and girl being put to bed by their Mother-Goose-loving babysitter, affectionately referred to as “Skinny Doug.” After each of Doug’s enchanting renditions, the children beg for another: “‘We love it! We love it!’ said Bonnie and Ben./ ‘How does it go? Will you sing it again?’/ ‘Some other time,’ said Skinny Doug./ ‘But I’ll tell you another/ I heard from my mother.’ And so on and so forth. Horacek’s whimsical illustrations add an extra layer of charm, projecting the children and their babysitter into the periphery of each rhyme; so we see them picking up their own order at the pat-a-cake bakery or driving by to wave at the piggy squealing “wee wee wee.” An inventive way to feed the nursery rhyme obsession (no 300 page anthology necessary!).

Can you imagine anything worse than a child (or, in this case, a small winged animal who calls himself a “Snatchabook”), who doesn’t have someone to read him a bedtime story each night? I’m sad just thinking about it! But that’s the premise of this affectionate new story about a young rabbit that sets out to discover why books keep disappearing from the forest at night.

Helen and Thomas Docherty’s The Snatchabook (Ages 3-6) is filled with twilight-infused illustrations, depicting owls, squirrels, and hedgehogs tucked into trees and burrows, listening to “tales of dragons, spitting flames” and “witches playing spooky games”—and “every child in every bed,/ listened hard to each word said.” When these books start getting snatched, our lupine heroine, Eliza Brown, locates the Snatchabook, sits him down on her lap, and gives him a stern reproach: “You can’t just come and help yourself/ to every book on every shelf.” And yet, Eliza quickly softens when she learns of the Snatchabook’s plight: “I know it’s wrong, but can’t you see—I’ve got no one to read to me!” Together, the two form a plan that meets everyone’s needs: The Snatchabook returns each book (like a little Montessorian, Eliza stands watch to make sure the books are put back on the shelves very neatly). In return, the animals agree that the Snatchabook can join any of their nightly story times. I can’t imagine a better way to end our little ones’ days than with a story filled with such kindness and compassion. 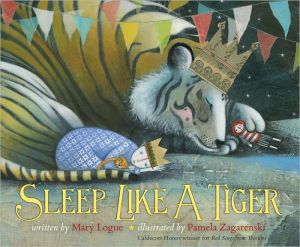 Confession: Mary Logue and Pamela Zagarenski’s piercing Sleep Like a Tiger (Ages 3-6) is technically not a new book; it came out in 2012. Not only that, but it received considerable media attention earlier this year when it won a Caldecott Honor. Nonetheless, I am including it here, because 1) I have found that few people actually know it (or, let’s see, their social media circles aren’t dominated by news of children’s books?), and 2) I am completely obsessed with everything about it and have been waiting for the perfect time to tell you.

Earlier, I mentioned that kids can be slow to warm up to new titles (an argument for owning books that you feel passionate about). In the case of my kids, my being obsessed with a book is often the Kiss of Death. I’ve learned to feign indifference around a new book in the hopes that my kids will see their picking it up as their idea. Still, in the case of Sleep Like a Tiger, I couldn’t suppress my delight—and so, for a long time, my daughter squealed “Noooooo” each time I suggested we read it. Until it finally took its place among her favorites.

So what’s so great about this book? Well, for one thing, it’s a little bit weird (in the way that many of the Greats are). It’s suspended somewhere between the real world and the dream world—in that blurred spot where the subconscious comes alive. It’s also filled with the most beautiful observations of the natural world, made by the parents of a crown-sporting little girl, as she stalls (“I’m not sleepy”) by asking questions about different animals’ sleeping habits. We learn that whales sleep while swimming in circles, that snails “curl up like a cinnamon roll inside their shell,” and that grizzlies sleep through the winter (“That’s too long!” the girl exclaims). But it’s the girl herself who reminds her parents that the tiger is the mightiest sleeper of all: “that way he stays strong.”

The glorious, restorative spell of sleep eventually overtakes our heroine, and Zagarenski’s incredible mixed-media illustrations (done on wood in the same way as her stunning Red Sings from the Treetops) morph the two worlds into one: the girl wriggles under the covers until she finds the warmest spot like the cat who sleeps by the fire; she “folds her arms like the wings of a bat”; and she rides on the back of the whale in her dreams. And, of course, she curls her back like the tiger. Strong, serene, asleep. Shhhhhhhhhhh. (Now quick: exit the room and congratulate yourself on a job well done.)

Other Favorite Bedtime Stories from 2013:
Rock-a-Bye Room, by Susan Meyers & Amy Bates (Ages 1-3)
Lena’s Sleep Sheep, by Anita Lobel (Ages 2-5)
Hank Finds an Egg, by Rebecca Dudley (Ages 2-6) (OK, technically not a bedtime story, but this sweetest of stories has a gentle, lulling quality, a quiet wordless format, and boasts a bedtime scene in the middle of it…so, there, I’m including it.)

§ One Response to Holiday Gift Guide 2013: Bedtime Stories for the “Goodnight Gorilla”-Obsessed

You are currently reading Holiday Gift Guide 2013: Bedtime Stories for the “Goodnight Gorilla”-Obsessed at What to Read to Your Kids.