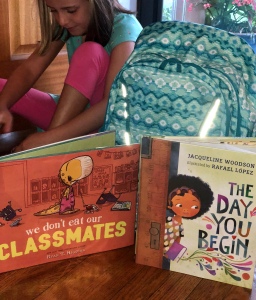 They need to go back.

Still, there is nothing easy about this month. We parents have to go through the Herculean effort of getting our bleary-eyed kids out the door, only to have them peak under someone else’s watch and then return home exhausted, cranky, and full of penguin problems. Meanwhile, our children face their own set of hurdles, like having to channel their pint-sized reserves of concentration for hours at a time.

But perhaps the greatest challenge for many children comes from the fact that they are about to be corralled into a room for seven hours a day with a dozen (or two) other children, many (or all) of whom are strangers. We take the set-up of modern schooling for granted, but when you get right down to it, it’s like a wayward science experiment: all these personalities hissing and popping, and no one wearing safety glasses.

Fortunately, there are two brilliant new back-to-school picture books to lend some empathy—or at least levity—to the subject of coming-togetherness. On the surface, We Don’t Eat Our Classmates and The Day You Begin couldn’t be more different; and yet, both cleverly tackle the daunting question of how we go about being ourselves in a classroom full of other selves. 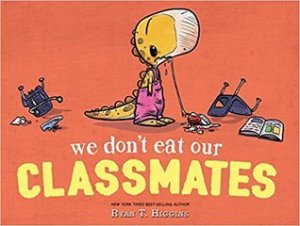 Ryan T. Higgins’ We Don’t Eat Our Classmates (Ages 3-9) will emit no shortage of chuckles, but it will also resonate universally, because if your child doesn’t struggle with impulse control himself, chances are he’s in a classroom with someone who does. Every fall, like clockwork, my daughter comes home from school bearing a list of daily grievances done by one of the new kids in her class. He won’t sit still, he hits, he won’t listen, he won’t clean up…and so on. My kneejerk reaction to her persistent negativity—I hope you are being kind to this child!—is exacerbated by my fear that this is precisely how some perceive her older brother, who has his own unique relationship with impulsivity in the classroom.

And yet, just as predictably, at some point during the year, Emily does a 180. She stops complaining about said child and begins defending him. He is getting better, he was helpful today, he said a nice thing in class meeting, you should see how hard he tries. Bless the teachers who have paired my daughter up with these children on more than one occasion, letting her glimpse below the surface.

In the silliest of ways, We Don’t Eat Our Classmates asks its reader to imagine how frustrating and lonely it can feel when you are a kid who must wage a war against your very nature to conform to the conventional expectations of a classroom. If you remember author-illustrator Higgins from the Mother Bruce series (so, so, so funny), you know how talented he is at creating adorably down-trodden heroines, who dramatically pit themselves against the world and then bemoan the consequences of it. Penelope Rex, the heroine of We Don’t Eat Our Classmates might look the part in pink overalls and a pony backpack, but she has the monumental challenge of being the only T.Rex in a classroom of human children.

(Kudos to Higgins for casting his impulsive protagonist as a girl and for featuring a diverse classroom, complete with a girl in a headscarf and a boy in a kippah.)

T.Rexes get very hungry, and the 300 tuna sandwiches Penelope’s dad packs in her lunch each day do little to squash her propensity for the taste of young humans. And so, even while she wants more than anything for the other children to like her—to invite her to join their games on the playground and sit next to her at lunch—she keeps blowing it. She. can’t. stop. eating. her. classmates. The fact that she spits them out when reprimanded by her teacher does little to reassure her victims. 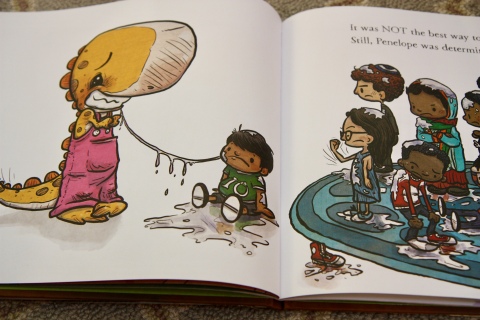 Always, the fun of reading Higgins’ books lies in discovering the humor he hides in his illustrations, and Penelope’s attempts to fit in are no exception. “She finger-painted some of her best work”; and yet, a glance at the illustration reveals she has painted a picture of a smiling child disappearing into the teethy jaws of a young dinosaur. “She even saved Griffin Emery a seat at lunch,” only closer inspection reveals that she is pointing at an empty spot on her plate. 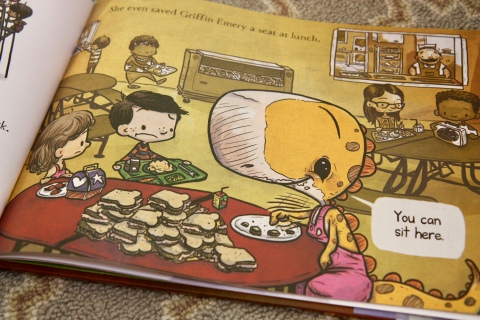 Back home, a dejected Penelope sheepishly admits to her father that it’s possible “none of the children wanted to play with me” because she ate them (“maybe sort of just a little bit”). To which her father offers some advice: “You see Penelope, children are the same as us on the inside. Just tastier.”

Things do not improve until Penelope has an unpleasant encounter with the classroom pet, a goldfish named Walter with a carnivorous desire to chomp fingers (my mother would call this, “getting a taste of your own medicine”). “Once Penelope found out what it was like to be someone’s snack, she lost her appetite for children.” (And, no, I am not spoiling that illustration for you.) With her impulsivity somewhat tamed, Penelope begins to showcase a personality worth knowing, sharing a fondness for cooperative building, hiding and seeking, and the ability to laugh at herself.

If We Don’t Eat Our Classmates is about a child who comes out of the gate too strong, Jacqueline Woodson’s The Day You Begin (Ages 5-10), illustrated by Rafael Lopez, is about the experience of holding back, of fearing the judgment of others. Written as an ode to the child who feels like an outsider—“There will be times when you walk into a room and no one there is quite like you”—Woodson’s text was inspired by a poem from her award-winning memoir, Brown Girl Dreaming, and its lyricism enfolds the reader in a warm cocoon: I hear you, it says, and you deserve to find a place wherever you go.

While the second-person narrative is intended to address anyone who feels set apart—due to physical appearance, heritage, religion, socio-economic background, or something less tangible—four racially-diverse children feature throughout the book and lend some specific examples. One is intimidated by her classmates’ tales about the exotic vacations they took during summer break, since she spent her days caring for her little sister in their hot city apartment (“what good is this/ when other students were flying/ and sailing and/ going somewhere”). 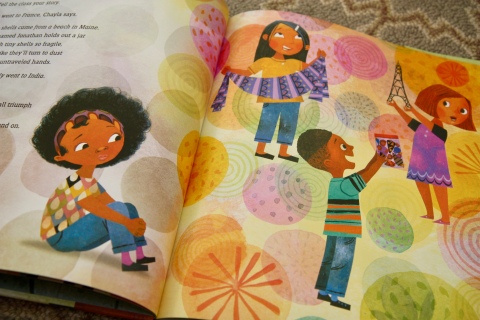 Another just immigrated from Venezuela and worries how his accent will be perceived by his American peers (“because they don’t understand, the classroom will fill with laughter until the teacher quiets everyone”). Still another child dreads the questions she’ll get about the lunch her mother packed, rice and meat and kimchi (“too unfamiliar for others/ to love as you do”). The abstract image of a ruler figures into some of these pictures, perhaps not only alluding to the work of school days, but to the way we relentlessly measure ourselves against those around us. 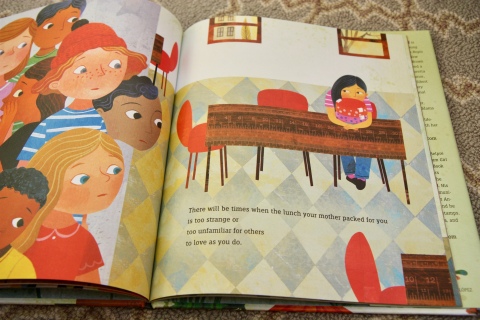 For the fourth child, painted as a Caucasian boy standing on the sidelines of a playground, we get a hint of the offhand dismissiveness common when a group of kids used to playing together encounter someone new (“I don’t want him on our team./ You can watch./ Maybe you can have a turn later.”) This particular image no doubt rings a chord with both of my children, who have been forthcoming about their own anxiety in deciphering the rules of engagement on the playground, of not wanting to jump in for fear of betraying ignorance or inadequacy.

As the book continues, we witness subtle but significant transformations in the four children, as they take tiny but emboldened steps to put themselves out there: to invite a peak at their lunch, to point out a commonality, to share a story. “My name is Angelina and/ I spent my whole summer with my little sister…reading books and telling stories and/ even though we were right on our block it was like/ we got to go EVERYWHERE.” 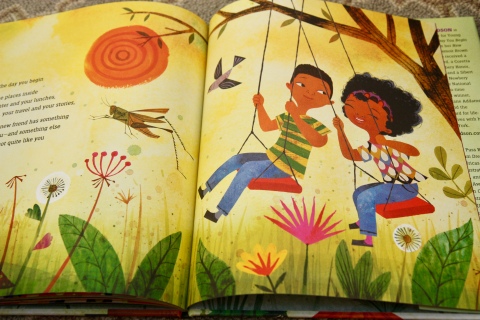 What I love is that the emphasis here is on making a start. Nothing more. “There will be times when you walk into a room and no one there is quite like you until the day you begin.” Furthermore, Woodson makes clear to her readers that the power to make this start, to connect, resides in everyone.

All that stands beside you is
your own brave self—
steady as steel and ready
even though you don’t yet know
what you’re ready for. 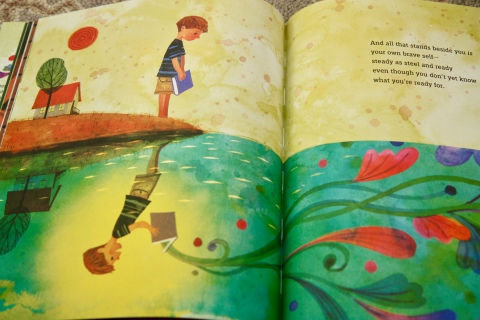 Can I get this spread made into a poster for my children’s bedroom walls? Please?

We walk into unfamiliar settings, where we might encounter any combination of invisibility and judgment, but we never walk in alone. We have within us, not only a personality worth knowing, but the power to use this personality to bridge that uncomfortable gulf. We need only to begin.

Books published by Disney Hyperion and Nancy Paulsen Books (review copy from Penguin Young Readers), respectively. All opinions are my own. Amazon.com affiliate links support my book-buying habit and contribute to my being able to share more great books with you–although I prefer that we all shop local when we can!

You are currently reading The Social Science Experiment That Is Our Children’s Classroom at What to Read to Your Kids.