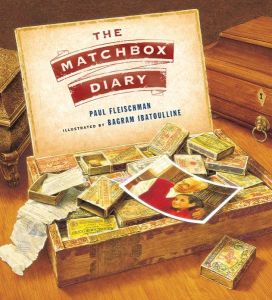 Just a few weeks earlier, JP and I had been discussing the concept of “memory boxes,” after reading Paul Fleischman’s extraordinary and deeply moving new picture book, The Matchbox Diary (Ages 6-10). The book chronicles the life story of an Italian-American boy, who sailed with his family to Ellis Island in search of a better life.

The immigrant’s story of poverty and hardship, of hope and determination, of fear and discrimination is nothing new to children’s literature (see my list at the end, plus don’t forget Brave Girl from my post this past summer); but the novelty here lies in the telling. The boy is now an old man, and he relates his childhood experiences to his great-granddaughter by sharing the cigar box that served as his “matchbox diary.” As the girl slides open each matchbox to reveal a different “memento,” her great-grandfather shares its story: the olive pit his mother gave him to quell his hunger in Italy; the sunflower seeds he used to count the days until the ship reached the Statue of Liberty; a fish bone from his family’s grueling work in American canneries; a tooth he lost when kids threw rocks at him; the ticket stub to his first baseball game; and so on. In addition to Fleischman’s intimate narration, each story comes to life through Bagram Ibatoulline’s spellbinding paintings, devised in sepia tones to contrast the full-color spreads that mark the present-day conversation between the girl and her great-grandfather. Almost as if he was touching history itself, JP kept running his hands over these black and white, photographic-looking illustrations (water marks and discoloration add to the impression of aging). The girl in the story asks insightful questions along the way, and her awe and amazement echoes that of any elementary child hearing this story (from “You didn’t have your own room?” to “I wish I could write a diary!”).

A spread towards the end of the book, when the boy is finally able to attend a school to learn typesetting. Is it any wonder he went on to become a printer and own a bookshop as an adult?

The notion of preserving one’s life story, of containing our most self-defining moments in a small wooden box, is foreign to many of us living in today’s Western societies. Our lives—and especially our children’s lives—seem increasingly defined by Excess. I spend hours a week walking around the house trashing various art projects, plastic gold coins left over from a pirate party, a half-broken train my kids once loved—and the truth is, most of the time, my children don’t even notice the things that go missing. I make an effort to save what I deem important along the way— Emily’s first pair of walking shoes, JP’s first addition sheet from school, boarding passes from their plane rides—and I pack them up in the respective “memory boxes” that JP referenced above. But I never think to encourage them to make their own boxes, with their own choices about what’s important. I guess part of me assumes they’ll fill a memory box indiscriminately, the same way they do the shoe boxes of rocks and leaves and acorns that line their closet floors (“All of these are my special treasures!”). But maybe if I don’t give them the opportunity for self-narration, then they’ll never learn to weed through the excess to find what really matters, to frame their own stories—the good and the bad—as something worth sharing and celebrating.

And then there’s the matter of writing one’s story—a luxury that comes only from having the opportunity to learn to read, a luxury that this Italian-American child didn’t have for a long time, forced to work alongside his family instead of attending school with other American children. When he was a child, my husband remembers asking his own Italian-American grandmother (his “Nonna”) what her hobbies were as a child. “School was my hobby,” she replied. “I used to get up at 4am to go to the nut factory with my father. Then I’d get a break to go to school before returning to the factory in the afternoon. School was my hobby. The only time I had for myself.” Seeing writing as a gift, not to mention a meaningful way for self-expression, is just one of the things that immigrants’ stories can teach our children. Every one of us Americans is or is descended from an immigrant, beginning with the first European settlers. Their stories are our stories. My hope is that one day JP can channel his sadness over the ending of things like birthday parties (and the greater losses to come) onto paper—as much for himself as for others like me who might have the privilege of reading his words.

Other Favorite Picture Books With Powerful Immigrant Stories:
All the Way to America: The Story of a Big Italian Family and a Little Shovel, by Dan Yaccarino (Ages 5-8)
The Blessing Cup, by Patricia Polacco (Ages 6-10)
Emma’s Poem: The Voice of the Statue of Liberty, by Linda Glaser & Claire Nivola (Ages 6-10)
When Jessie Came Across the Sea, by Amy Hest & P.J. Lynch (Ages 6-10)
Grandfather’s Journey, by Allen Say (Ages 6-10)
Peppe the Lamplighter, by Elisa Bartone & Ted Lewin (Ages 6-10)
Brave Girl: Clara and the Shirtwaist Makers’ Strike of 1909, by Michelle Markel & Melissa Sweet (Ages 6-10)
My Name is Yoon, by Helen Recorvits & Gabi Swiatkowska (Ages 6-10)
The Quiet Place, by Sarah Stewart & David Small (Ages 6-10)

§ One Response to Would Your Life Story Fit In a Box? What We Learn From Our Ancestors

You are currently reading Would Your Life Story Fit In a Box? What We Learn From Our Ancestors at What to Read to Your Kids.