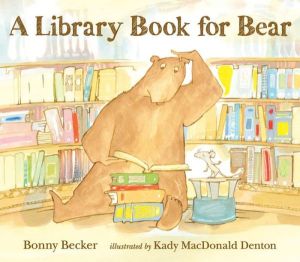 My husband thought he was very clever when he surreptitiously posted to his Facebook page that The Book Mommy (a.k.a. me) had been overheard muttering to herself, “If I have to pick up another book off the floor, I swear I am getting rid of all of them!” Sigh. We all have our moments. Even the most book-obsessed among us.

Most of the time, I am exceedingly grateful for the sea of books that overtakes our house every day: when books from our overflowing shelves mix with stacks of incoming library books and set my children’s imaginations afloat. 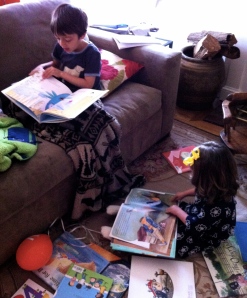 Yes, I’m firmly in the camp that it is impossible to have too many books (really good books, that is). You might say I’m a lot like the book-pushing Mouse in Bonny Becker’s A Library Book for Bear (Ages 3-6), the latest installment in her beloved Bear and Mouse series, which never fails to have my children roaring with laughter (and which allows me to don a British accent, as that’s how I’ve always imagined Mouse). On the off chance that you’ve been missing out on these delightful stories, you can catch up on past titles here. END_OF_DOCUMENT_TOKEN_TO_BE_REPLACED

Children form attachments to the oddest things. Take, for example, the dried out husk of a seed for which my six year old spent a recent afternoon constructing a shoebox house, complete with a toilet-paper-tube flag post and a felt blanket and pillow that he actually sewed himself. Did you get that? For a seed. There was also the time that he and his sister took their plastic straws from a restaurant to bed with them. These are not children who are hurting for baby dolls or stuffed animals; they simply choose to imprint on the less obvious choices.

So, is it any surprise that they would love Sophie’s Squash (Ages 3-7), a new picture book by Pat Zietlow Miller (fellow children’s book blogger), where a little girl develops a steadfast affection for a squash that her parents pick out at the farmers’ market and intend to cook for dinner? Sophie uses black marker to draw a face on the butternut squash; she names it Bernice (love); she wraps it in a baby blanket and rocks it to sleep; she takes it to story time at the library (double love); and she even organizes play dates for it with other squash (triple love). In other words—as her very patient parents soon realize—this squash is no dinner. END_OF_DOCUMENT_TOKEN_TO_BE_REPLACED

Just a few weeks earlier, JP and I had been discussing the concept of “memory boxes,” after reading Paul Fleischman’s extraordinary and deeply moving new picture book, The Matchbox Diary (Ages 6-10). The book chronicles the life story of an Italian-American boy, who sailed with his family to Ellis Island in search of a better life. END_OF_DOCUMENT_TOKEN_TO_BE_REPLACED 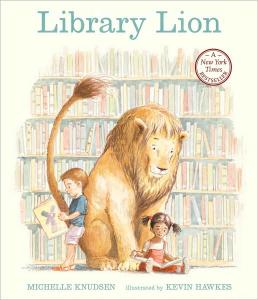 With the local library only one block from our house—well, let’s just say that when we moved here, the librarians were the first people to learn my children’s names. It’s on these late-afternoon visits to the library that my kids get to experience that rush of adrenaline that comes from being endowed (however briefly) with the freedom of unlimited choice. My son JP wanders the aisles of the children’s department; takes down any books that look interesting; makes a big pile at one of the child-sized tables; pages through each of them in a (somewhat futile) effort to narrow down his selections; allows Mommy the power of veto (which I try to use sparingly); and then drags his bountiful stack over to the circulation desk. At this point, no longer able to contain his excitement a second longer, he will announce triumphantly to any bystanders, “Looks like it’s Book Day for us!” (All this while my toddler daughter ducks in and out of aisles trying to engage anyone in a game of peekaboo—she has her own Library Experience.)

With all those shelves of possibility, all those enticements to imagination, it’s no wonder that anyone walking through the library’s door will instantly fall under its spell. But what if that someone isn’t a child at all—but a lion? Michelle Knudsen and Kevin Hawkes explore just this question in Library Lion (Ages 3-7), where a lion wanders into (what appears to be) The New York Public Library, sits down for story time, and is instantly spellbound. In fact, he is so hooked, that when story time ends, he unleashes a loud and despairing “RAAAHHRRRR!” This disruption quickly earns the lion an ultimatum, issued by the kindly but rule-enforcing Miss Merriweather: he can stay so long as he keeps his roars to himself. The obedient lion becomes a regular at the library, giving children a boost to reach high shelves and helping Merriweather lick envelopes for overdue notices. 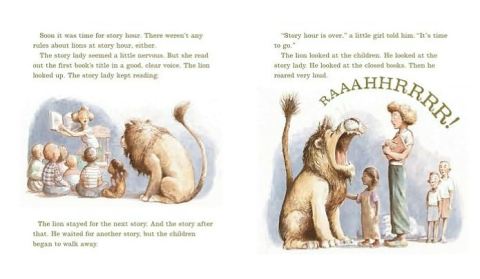 END_OF_DOCUMENT_TOKEN_TO_BE_REPLACED

Happy Earth Day (or, as my very astute 4-year-old pointed out this morning, “Aren’t we supposed to care about the earth every day?”)! Oh right, yes.

Ironically, with all the increased mobilization around Going Green in the last several decades, the member of our family who actually most fully embodies and preaches a love for the planet is my 94-year-old grandmother, referred to affectionately by her grandchildren and great-grandchildren as Noni. As a child, I spent my summers at my grandparents’ farm house, on the shores of Lake Erie, getting lessons on the value of spiders (you never kill a spider, we were told, even if it is sitting on your toothbrush), the conservation of water (why shower when you can swim in the lake?), and that sometimes leaving trees and wildflowers right where they are makes the best kind of landscaping.

Today, one of the highlights of my son’s summers is the week he spends with Noni up at this same spot, where the house has been modernized but the land has not. These days, Noni’s mostly sedentary, but by golly if she doesn’t still go out with her hose to water her garden, and JP loves to trail behind her, occasionally earning a turn with the hose, but mostly getting an earful on “dead heading” flowers, which weeds are “not worth your time,” and how to grow the oldest and biggest Hibiscus plant in the history of time.

Perhaps this is why he (and I) respond so wholeheartedly to Grandpa Green (Ages 4-8), by the supremely talented (and deliciously quirky) Lane Smith. Through the simple and admiring words of a little boy (armed with his own watering can), we learn about his great-grandpa, a masterful hedge trimmer, who transforms ordinary garden hedges into dragons, elephants, wedding cakes–even the cast of “The Wizard of Oz” and “The Little Engine That Could.” As the boy explores his great-grandpa’s garden, we realize that every “milestone” of the latter’s life has been remembered in one of these stunning green creations.

END_OF_DOCUMENT_TOKEN_TO_BE_REPLACED

You are currently browsing entries tagged with David Small at What to Read to Your Kids.