A Love Letter to Florence

We left our hearts in Italy six weeks ago. It was our first family trip outside the country and a magical foray into ancient architecture, big-hearted people, and culinary delights (my son has since questioned why Americans don’t grate fresh truffles on everything). And, of course, the art. Oh, the art! Art on canvases, art on ceilings, art around doorways. Art rising up out of the ground.

I’ve learned, from previous trips to New York City and even from local excursions to museums, that any time spent sharing books with my children about sights they’re going to see, before they see them, is time well spent. If my kids are able to recall some granule of knowledge about the construction of a building, if they are able to spot a piece of art in a museum that they’ve previously seen in a picture, they are vastly more engaged.

(Case in point: last year, my six-year-old’s class studied North American artists, including Georgia O’Keefe and Jackson Pollack, reading several books in the Getting to Know the World’s Greatest Artists series. When I took her to The Met last spring, she flitted around the modern wing, waiting for her eyes to fall upon “A Georgia!” or “A Jackson!”, at which point she stood transfixed for several minutes. But anything else? Barely a pause.)

In that vein, I was not as surprised as my children were when the Easter Bunny left baskets filled with books about Michelangelo, Da Vinci, and the Ancient Romans six weeks before our trip (“I can’t believe the Easter Bunny knew we were going to Italy!”). We spent much of the weeks leading up to our departure deep in these pages. (I’ve listed our reading list at the end of this post for those planning an Italy trip of their own.)

In Florence, when my daughter walked into the Piazza della Signoria and caught her breath, I knew it wasn’t just the animated story our tour guide was delivering. “Mommy, look there,” she whispered, pulling on my arm. “It’s the lion from my Michelangelo book! The one Michelangelo is sketching when he’s a boy.” She ran over to one of the iconic Medici lions and peered up at its gaping stone eyes. “It has the sweetest face, don’t you think? And its paw is gigantic! You can’t tell any of that from the book!” Would she have felt the same connection to this work of art had she not seen that silly cartoon beforehand? Certainly, she would not have sought it out. 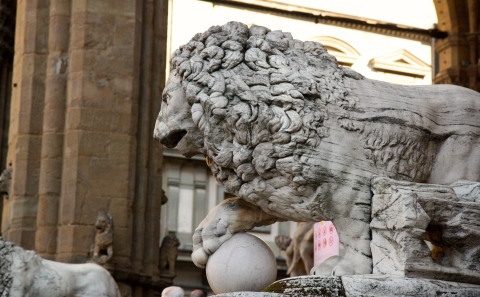 If reading about something beforehand deepens our connection at the moment we finally see it, then the same might also be said for reading about it afterwards. When we arrived home after our two weeks in Italy, all four of us dragging ourselves and our luggage down the front walkway, we found what turned out to be a very fortuitous package sitting by the door: an advance copy of Barbara DiLorenzo’s Renato and the Lion (Ages 5-9). Loosely based on true events, this exquisite picture book tells of a Florentine boy’s love for the art in his city—and his determination to protect it in the early days of World War Two.

A bit of the magic had followed us home.

In luminous watercolors, DiLorenzo has captured the timeless essence of Florence, the way it looked seventy years ago when the story was set and the way it still looks today. The city is itself a work of art, its orange clay-tiled rooftops creating a color scheme which enfolds cobbled alleyways, hidden piazzas, medieval bridges, and—at its center—the magnificent Duomo. As one Booklist reviewer noted, this book is nothing short of a love letter to this beauty.

The boy in the story, Renato, has grown up around the art of Florence, not only because it surrounds him as he kicks his soccer ball home from school or splashes with friends in the fountain of Neptune, but because his father works in a museum, caring for and repairing ancient sculptures.

One evening, Renato’s father, who has been working late into the night for many weeks, leads him into the Accademia Gallery, where he shows him a tall domed wall made of red bricks in the spot where Michelangelo’s famous David statue has stood for the past sixty years (having been relocated from the Piazza della Signoria).

“The sculpture is still there,” explained his father, “but if you can’t see it, you might not know it was there.”
“Who might not know?” asked Renato.

In the gentle dialogue between father and son which follows, readers begin to comprehend alongside Renato the reality of the war raging across Europe, a war which now threatens—either accidentally or purposefully—to destroy the artistic treasures of this beautiful city. While Renato’s family is fiction, DiLorenzo has based them on Italian citizens who protected ancient treasures from bombings during World War Two—for example, by encasing them in brick tombs. 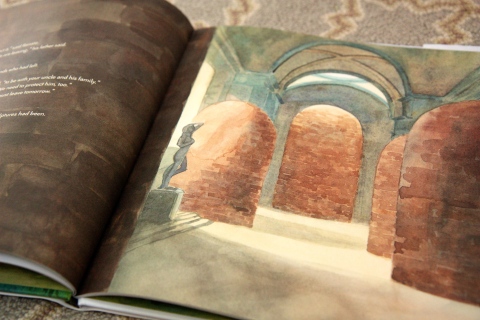 Renato’s favorite statue has always been the stone lion off the Piazza della Signoria. He bids it buongiorno every morning and buona sera every evening. When Renato learns of his father’s plan for the family to flee Florence, to seek refuge from the war in America, he immediately thinks about the lion.

“But what about the lion?” Renato said. “We need to protect him, too.”
“We don’t have time,” said his father. “We must leave tomorrow.”
Renato looked around the museum.
He looked at the walled enclosures where the sculptures had been.
Before his father could object, Renato ran toward the piazza.

It is impossible not to hold your breath in the next scene. As Renato begins hurriedly to lay bricks around his beloved lion after curfew, German soldiers approach. Renato quickly climbs upon the lion’s back and attempts to make himself unnoticed behind the lion’s massive head.

What follows are several glorious pages of magical realism, as the lion suddenly comes alive beneath Renato’s body. Holding tight to the living lion’s mane, Renato is transported on a moonlit journey across the city—in many respects, a journey of goodbyes to some of his city’s most beloved landmarks—until the lion delivers him safely into the arms of his grateful father.

The next morning, moments before Renato and his family must depart for the Henry Gibbins, the ship which will take them across the ocean (named for the actual boat ordered by President Roosevelt to rescue refugees from Europe), Renato finds his father back at the Piazza della Signoria, putting the finishing touches on a brick wall around the stone lion. He has worked all night to protect the statue that protected his son. 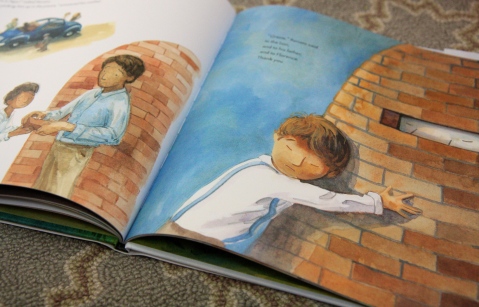 DiLorenzo could have stopped her story there, although we’re immensely fortunate she didn’t, especially those of us with a dual love for Florence and the island of Manhattan. (As we were walking around Florence, my daughter said, “Florence is a lot like New York City. You do a lot of walking and there are a lot of pigeons.”) Not only do we learn more about Renato’s life in New York—including his regular visits to the two stone lions that flank the entrance to the New York Public Library—but we are treated to a touching inter-generational story. An old man by the end of the story, Renato returns to Florence for a short stay with his granddaughter. It is the first time he has been back, and while this time he takes an airplane across the ocean, he finds that the most important things have not changed.

Those who have had to leave behind a piece of themselves will identify with Renato’s initially subdued expression, as he walks quietly with his granddaughter through the nostalgic streets of his childhood. When they get to the piazza, though, he finally lets himself feel the swell of the moment. His granddaughter—just like my Emily—is the first to spot the lion, and she pulls her grandfather toward it. The smiles on both of their faces when they get there are as priceless as the works of art themselves.

Oh, Florence. Oh, Italy. Oh, art and travel and family. May we always fight for what we hold most dear.

Italy Reading List (things we read prior to and since our trip!):
Stone Giant: Michelangelo’s David and How He Came to Be
Michelangelo (Getting to Know the World’s Greatest Artists)
Leonardo: Beautiful Dreamer
What is the Colosseum?
You Wouldn’t Want to be a Roman Gladiator!
Pompeii: Lost and Found
What Was Pompeii?
You Wouldn’t Want to Live in Pompeii!
Ancient Rome (DK Eyewitness)
History News: The Roman News
A Renaissance Town
Olivia Goes to Venice

It was also a big plus that JP read Rick Riordan’s fiction series about the Greek and Roman gods prior to the trip. A little Old Testament review would also have been nice!

—
Did you enjoy this post? Make sure you don’t miss any others! Enter your email on the right hand side of my homepage, and you’ll receive a new post in your inbox each week.

Review copy by Viking, PenguinYoungReaders Group. All opinions are my own. Amazon.com affiliate links support my book-buying habit and contribute to my being able to share more great books with you–although I prefer that we all shop local when we can!

§ One Response to A Love Letter to Florence

You are currently reading A Love Letter to Florence at What to Read to Your Kids.