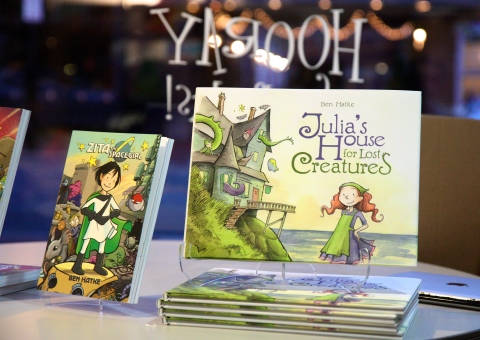 I am not that kind of mom. Two years ago, I participated in a Spring Break Swap with a group of close friends, where we each took turns at our respective houses watching nine kids for a day. My kids have lovely friends. Kind, intelligent, creative friends. But that did little to quell the feeling that I was UNDER SIEGE. So many little mouths telling me they were hungry! So many eager eyes imploring me to admire their drawings! So many children running up and down stairs, squealing and shouting and scrabbling!

Nope, I am not that kind of mom. It turns out that becoming a parent didn’t transform my Type A personality. I’m often still as inflexible as my daughter is when she’s presiding over her tea parties. Still, the idea of having an open-door policy, of creating a space where everyone feels welcomed and accepted, holds great romantic appeal. On paper.

This promise of hospitality is just one of the many reasons that I continue to be taken with Ben Hatke’s 2014 picture book, Julia’s House for Lost Creatures (Ages 3-6). The only reason I didn’t write sooner about one of my favorite books of last year is that it was initially such a runaway hit, the Indie publisher couldn’t print them fast enough!

Allow me to touch on some of the gems in this story. To begin with, there’s Julia, our young Type A heroine with a handkerchief in her hair and gold in her heart; who dreams of making her large, rambling Victorian house a refuge for “Lost Creatures.” (Incidentally, Julia’s compassion towards “misfits” reminds me of the equally enchanting Miss Maple’s Seeds.) 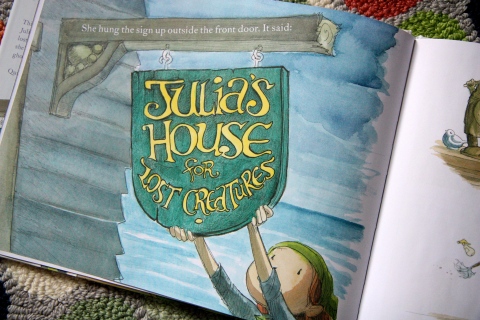 But WAIT. My children would go absolutely bananas if I wrote another word without mentioning their favorite detail: that the book opens with Julia’s life-sized house arriving at the seaside on the back of a turtle. That’s right, some people go where the wind blows them; others follow the whim of a giant, purposeful turtle.

Then there are the Lost Creatures themselves: an energetic hodgepodge of trolls, mermaids, ghosts, dragons, fairies, folletti, and other unidentifiable but irresistibly appealing creatures—some sad, some hungry, some lonely, and some just plain curious. (Here, we get reminders of another favorite, The Monster’s Monster.)

There is the predictably unpredictable chaos that ensues when all the creatures suddenly find themselves under one roof—and the effect that this has on poor Julia, who would really like to be a lot breezier than she is. Even if she can get past the mountain of dirty dishes, the footprints on the walls, and the loud music, a folletti toasting a marshmellow over a small bonfire on her roof is just one step too far.

There’s Julia’s stroke of genius—a chore chart!—which ultimately allows everyone to co-habitate in peace and harmony. (Of course! Give everyone jobs! Why didn’t I think of that?) 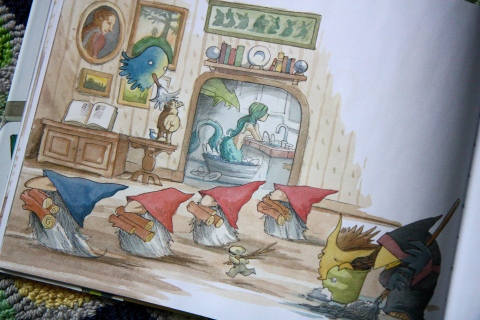 Finally, there is author-illustrator Ben Hatke’s unique treatment of the subject matter. Those with kids who have been bitten by the Graphic Novel Bug (which may not be a new phenomenon, but which is gaining momentum like never before) may already know Hatke from his acclaimed Sci-Fi series, Zita the Spacegirl (Ages 8-14). Even I—not by nature a comics lover—have fallen in love with this sophisticated graphic novel trilogy for its spunky heroine, other-worldly setting, deeply cadenced narrative, and all-around cool factor.

With Julia’s House for Lost Creatures, Hatke’s first foray into the picture book world (and the beginning of more to come!), he blends both traditional picture book elements with comic-strip attributes. Playing to his strengths as a graphic artist, Hatke is able to advance Julia’s story as much through the visual spreads and frames as he does through the carefully-chosen sentences. The resulting hybrid feels almost like a new literary category, and both of my children Can’t. Get. Enough.

When I learned that Ben Hatke would be leaving his rural Virginia home (nestled in the Shenandoah Valley with his wife, four young daughters, and an eccentric cast of cats and chickens) to visit Hooray for Books here in Alexandria, you can bet we were going to be there. Hatke is exactly the kind of literary artist that I would like my children to know: approachable, vastly talented, and bursting with pleasure to be doing exactly what he is doing. His enthusiasm for book making—specifically for experimenting with the comic format—is positively contagious.

My seven year old, fueled by what I am not sure is a healthy obsession with Calvin and Hobbes (if you hear the rustling of pages in his room at 6am, you can bet that he’s reading one of the ten Calvin books stacked next to his bed like a second nightstand), has spent much of this last year attempting to write and illustrate comic stories of his own. When Hatke told JP that each of his book projects originates in a designated notebook, and that most of his ideas arise from free-form sketching in said notebook, I saw JP’s eyes light up. I was not surprised when, the next day, he brought his wallet to the grocery store to purchase a notebook for his “next project.”

Speaking of projects, here is a glimpse of Hatke’s next picture book, starring a misunderstood goblin and his skeleton friend, destined to live in that same compelling cross-section of fantasy and realism that is very quickly becoming Hatke’s claim to fame.

And even before the goblin book comes out, as early as this September, we’re going to get an early-reader graphic novel, somewhere between the levels of Julia and Zita, titled Little Robot. That’s right, people, this guy is on a roll. 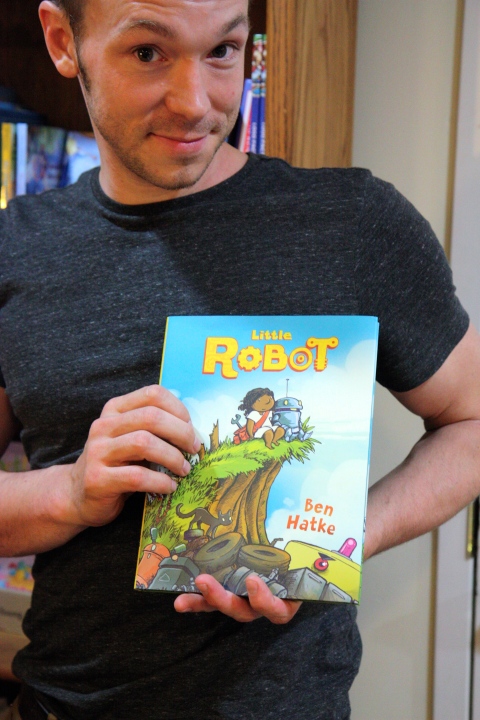 Perhaps someday I’ll get up the courage to invite Hatke and his family and his four-legged and feathered pets to my house for a play date. Heck, maybe I’ll invite all of you to bring your kids, too. I’ll sit back, watch the kids overturn paint cups and spray each other with our garden hose, and I’ll smile and think, “The more the merrier.”

Or perhaps I’ll leave the hosting to local bookstores.

§ 8 Responses to Weird and Wonderful Hospitality (Courtesy of Ben Hatke)

You are currently reading Weird and Wonderful Hospitality (Courtesy of Ben Hatke) at What to Read to Your Kids.