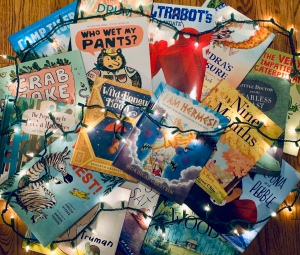 Today is part recap, part intro. To kick off the picture book portion of my Gift Guide, I’ve already told you about my mad love for Home in the Woods and Pokko and the Drum. Earlier in the year in these pages, I sang the praises of Crab Cake, Lubna and Pebble, I am Hermes!, Camp Tiger, A Stone Sat Still, The Scarecrow, and Who Wet My Pants?—all of which would also make fantastic holiday gifts. But if you haven’t kept up with my reviews on Instagram all year long, I thought it was high time I shared some of them here. Because one or two (or all) of these might be perfect for someone on your list.

END_OF_DOCUMENT_TOKEN_TO_BE_REPLACED

I am not that kind of mom. Two years ago, I participated in a Spring Break Swap with a group of close friends, where we each took turns at our respective houses watching nine kids for a day. My kids have lovely friends. Kind, intelligent, creative friends. But that did little to quell the feeling that I was UNDER SIEGE. So many little mouths telling me they were hungry! So many eager eyes imploring me to admire their drawings! So many children running up and down stairs, squealing and shouting and scrabbling!

Nope, I am not that kind of mom. It turns out that becoming a parent didn’t transform my Type A personality. I’m often still as inflexible as my daughter is when she’s presiding over her tea parties. Still, the idea of having an open-door policy, of creating a space where everyone feels welcomed and accepted, holds great romantic appeal. On paper.

This promise of hospitality is just one of the many reasons that I continue to be taken with Ben Hatke’s 2014 picture book, Julia’s House for Lost Creatures (Ages 3-6). The only reason I didn’t write sooner about one of my favorite books of last year is that it was initially such a runaway hit, the Indie publisher couldn’t print them fast enough! END_OF_DOCUMENT_TOKEN_TO_BE_REPLACED

Last Friday, after a long week of 90 degree days, the kids and I were driving around struggling to fill the few hours between school and dinner. I suddenly remembered that earlier that day, I’d picked up a stack of just-published books at the store, and so I proposed that we head home to read in the AC. “Reading Party! Reading Party!” my son immediately began chanting, a phrase left over from when his sister was a baby and I would coax him into lying down with me while she took her morning nap in the other room, under the pretense that he could load up the bed with books and we’d have a “Reading Party” (true, my motivation was entirely selfish—must lay head down—but I’m also a big believer that, as parents, our excitement around reading rubs off on our kids).

So, as we sat down to read last Friday, I thought I’d use my kids’ reactions to decide which title to make my birthday pick for the month. I had all my money on Mini Grey’s new Toys in Space, because it’s hard to go wrong with a story involving a fleet of misplaced toys, a spaceship, a conflicted alien, a Wonderdoll blessed with storytelling prowess, and Grey’s hilarious (if occasionally crass) speech bubbles. (Incidentally, I chose another Mini Grey book for last July’s birthday pick, so there must be something about warm temperatures that puts me in the mind of Toys Coming Alive). As expected, Toys in Space captivated my kids and elicited no shortage of laughs. But when all was said and done, it was the final book in our pile that they asked to read a second and a third time—and which they both chose as their favorite.

Emily Jenkins and Stephanie Graegin’s Water in the Park: A Book About Water & the Times of the Day is a quiet, unassuming, lyrical portrait of the transformations that take place in a city park over the course of a typical hot summer day, from the early-morning canine visitors to the tottering babies putting their hands in sprinklers to the adults taking their lunch breaks on shady benches to the evening strollers that get caught in the cooling rain. Of course, there are lots of obvious reasons why my kids (and your kids) would like this book, most especially because it fits entirely into their frame of reference (dogs! swings! parents! nannies! boo-boos! containers of apple slices! tears over leaving the park!). In a season where the heat can make being outside feel oppressive, it’s nice to celebrate that water can be poured into sandboxes to make moats or drizzled down scorching metal slides; that a stray cat can enjoy a sip in a lingering puddle; and that a timid dog might finally decide to wade into the pond. One also can’t ignore the widespread and very natural representation of diversity among the children and adults at the park (Jenkins took her inspiration from weeks spent observing Prospect Park in Brooklyn).

But I think the biggest reason why my kids love this book (and why you shouldn’t hesitate to give it for your next birthday gift) is the sheer comfort that comes from reading a story that’s grounded in the natural progression of a day, whose very text echoes a predictable rhythm of dawn, morning, noon, afternoon, dusk, and night. Very early on, children develop a fascination for time, but it’s not for many years that they truly grasp the meaning of “ten o’clock” or “noon,” that they recognize patterns not only in their own day but in the strangers and animals around them (gasp: the park has a life even when I’m not there?!). There’s a wonderful calm that comes from reading a story that helps to make sense of the order of things. And when the rainstorm descends to cool us all off, there’s comfort in knowing that the sun will shine again.

“Around one o’clock, grown-ups wander in, squinting from their shops and office buildings…Two old people stand [near the pond] with a bag of bread crumbs…On very hot days, the ice cream truck comes early…Children get soft-serve cones and bright Popsicles…Sticky fingers and faces are rinsed in the sprinkler.”

You are currently browsing entries tagged with turtles at What to Read to Your Kids.