2019 Gift Guide: Favorite Picture Book of the Year (and How Family Should Be)

How it’s almost Thanksgiving I’ll never know, but the season of giving will soon be upon us. Seeing as I’ve read more this year than any other, I think it’s fair to say my 2019 Gift Guide won’t disappoint. I’m aiming to include something for every child and teen on your list. As has become tradition on this blog, I begin with my favorite picture book of the year (although spoiler: this year I have TWO, so stay tuned). Past years have seen this, this, and this. It has been hard keeping this one a secret…although timing for today’s reveal feels especially fitting.

Growing up, I always preferred Thanksgiving to Christmas. I would never have admitted this; it seemed odd as a child to prefer a holiday of sitting around, eating off formal china, and making conversation with grown-ups—over one with presents and candy and caroling. But there was something about the warmth and coziness of Thanksgiving which seduced me: returning home frozen after the Macy’s Thanksgiving Day Parade to an apartment abounding with hissing radiators and the smell of roasting turkey. There was the comfort of looking around the room and seeing the people I loved and not having the distraction of which gifts might be under the tree and which, disappointingly, might not.

It’s not lost on me that the timing of Thanksgiving plays a role in its appeal. After all, Thanksgiving kicks off the Holiday Season. It’s a time of anticipation, and there’s nothing more alluring to a young child than possibility. It may not be the holiday of presents, but it’s a road sign pointing towards the presents. Pointing towards the twinkling lights and crackling fires and colorful wrappings.

Still, there can be a kind of magic in and of itself created by family—and, if we’re lucky, it becomes almost tangible on Thanksgiving Day. For a few short hours, the world outside falls away, and the inside jokes and knowing glances and lingering hugs take center stage. Dishes are prepared with love and displayed in beautiful ways, and we relish the bounty of this precious togetherness.

In her exquisite new picture book, Home in the Woods (Ages 4-8)—one of the finest examples of bookmaking I’ve ever encountered—Eliza Wheeler invokes her grandmother’s childhood to tell the story of a family who manages to make magic for themselves, even in the toughest of times. (You might remember Wheeler from this long ago favorite. Since then, she has mostly illustrated others’ texts. So happy to see her back in the seat of author and illustrator, because her writing is every bit as evocative as her art.)

At six years of age, after being evicted from a town in Northern Wisconsin during the Great Depression, Wheeler’s grandmother moved with her eight siblings and single mother into a one-room tar paper shack deep in the woods. The family would reside there for five years. Their only food was what they could grow, forage, or hunt themselves; their only companionship was one another. All this is detailed by Wheeler in the Author’s Note, along with this: “What an incredibly hard time it must have been, and yet they recall the memories from those years as some of their best.” Home in the Woods gives form to some of these memories, poignant testaments to the magic created when familial love intersects with flourishing imagination.

Delivered in the first-person narration of six-year-old Marvel (the grandmother character), the story begins with her bereft family searching for a new home. “Dad lives with/ the angels now,/ and we need to/ find a new home.” Wheeler’s soft washes of greens and aqua create the background against which this darkly-clad family wanders with their scant belongings.

Following this introduction, the book is divided into the four seasons, allowing us not only to track the family’s evolution over a single year, but to appreciate the simultaneous challenges and joys unique to each season. We begin with Summer, specifically the moment the children lay eyes on the shack that is to become their home: “It’s hot outside, but the shack/ looks cold/ and empty,/ like I feel inside.”

But Mum offers optimism: “You’ll never know what treasures we’ll find.” Indeed, against the greys and browns of the shack’s bare interior are subtle touches of color. A door in the floor, for example, reveals a root cellar of empty jars, a fresh water pump, and a pile of colorful fabric scraps. The faces of the children may reveal disappointment and exhaustion, but the art points towards possibility.

This subtle introduction of color and detail into the illustrations—visual evidence of the family’s quiet emotional transformation—continues throughout the book. Before they feel any real warmth towards the tiny shack, though, the children begin to explore and delight in the wild nature around them. Rain falls like “crystals,” aiding the seeds the family has brought with them from their former home. The “secret paths of whitetail deer” reveal themselves to the children as they run through the trees. When the children collapse in a “blooming berry patch,” their bellies full of the “sweet jewels of blue and red” and their “laughter echo[ing] through the trees,” we begin to see Mum’s optimism taking root.

With Autumn comes chores (the children draw them from a hat) and chilly days—but also a chance to fill the cellar with jars of berry preserves and other harvests from the garden. By now, Marvel has adopted her mother’s imaginative speak: the jars, she tells us, are stacked in the cellar “like buried treasure.”

Here’s where I pause and tell you that my own children, nine and twelve, are completely taken by this picture book, despite their being outside the target age. Actually, my daughter was so enamored after I read it to her that she brought it over to her brother and convinced him to read it. “Nine of them lived in a shack, JP,” she proclaimed. There is something inherently fascinating about a family living a life stripped of every material luxury. But the beauty of Wheeler’s story is also the way in which the universal language of play transports these siblings, time and again.

After accompanying their mother to town for “basics only”—during which they gawk at all the real treasures on display in the window of the General Store—the siblings walk home in silence. Their disappointment is palpable. And yet, back at the shack, they “invent a new game” called General Store, where “we can buy anything we want!” Smiles abound, as all of them, including Mum, set up imaginative stands for “mud sweets” and rock jewels.

Winter sees the most apparent transformation to the shack’s interior, where the soft glow of the potbelly stove, hand-quilted coverings, and lessons in reading contrast with the expanse of cold white outside. Most days, Marvel tells us, the boys return from their hunting expeditions unsuccessful; but when they do manage a turkey, “we plunder our stores and Mum works the oven like magic.” Here’s what every Thanksgiving should look like: “a feast for the kings and queens of the forest!” 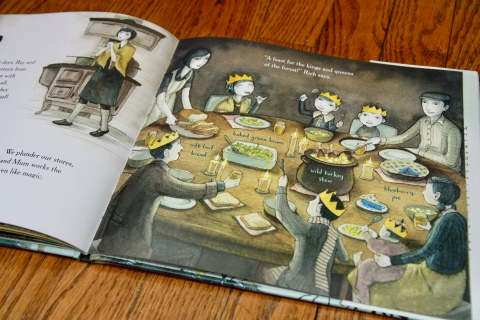 Still, Wheeler is careful not to gloss over the hardships of the family’s day-to-day life. The careful reader will notice the burdens carried by Mum, often in silence and often when no one is looking. In what is one of the most simultaneously warm and heart-wrenching spreads in the book, the mother leans her head against a window pane, gazing at the icy, star-filled night, while her entire family sleeps tightly beside her. (How do nine people sleep together in one bed? The two pairs of feet between the heads give some indication.)

It doesn’t seem like coincidence that the story ends in Spring, a time of rebirth and renewal. Vibrant colors pour forth onto the pages, and the family once again spreads out to fill their home’s natural surroundings. The children continue to spend their days engaged in chores, but there’s an ease in their body language lacking from the story’s early pages.

Here in these woods,
I find my brothers, my sisters,
our mum, and me (Marvel).
The shack all wrapped in tar paper
looks different now—
warm
and bright
and filled up with love…

This warmth isn’t simply owing to the mild temperatures outside. It’s a warmth built from equal parts work and play. Built from the love between siblings and the love of a mother. Built from a conscious choice to see the world as something beautiful and wondrous, something which delights even in the darkest moments.

Happy Thanksgiving, friends. May you cozy up with loved ones and make some magic of your own.

Published by Nancy Paulsen Books, an imprint of Penguin Random House. All opinions are my own. Amazon.com affiliate links support me and contribute to my being able to share more great books with you–although I prefer that we all shop local when we can!

§ 6 Responses to 2019 Gift Guide: Favorite Picture Book of the Year (and How Family Should Be)

I'd love to hear what you think! Comment here. Cancel reply

This site uses Akismet to reduce spam. Learn how your comment data is processed.

You are currently reading 2019 Gift Guide: Favorite Picture Book of the Year (and How Family Should Be) at What to Read to Your Kids.