2019 Gift Guide: My Favorite Read-Aloud of the Year (Finding Your Own Rhythm)

Last week, I told you about My Favorite Picture Book of the Year. I also told that you that, this year, I had two favorites. In fact, this second may be one of my favorite read-alouds ever. Seriously. Want me to swing by right now and read this to your kids? I’m in. Though I think they’d probably have more fun if you did it.

On the surface, Matthew Forsythe’s Pokko and the Drum (Ages 3-7) has a straightforward premise: girl gets drum; girl finds a way of expressing herself; girl wins over her skeptical parents. The originality lies entirely in Forsythe’s execution: a color palette at once earthy and whimsical; strategic use of white space to control pacing; expressive animal figures; subversive humor; and page turns perfectly timed for dramatic impact.

Forsythe’s dry humor kicks off in the story’s opening sentence: “The biggest mistake Pokko’s parents ever made was giving her a drum.” Proving that her parents know a thing or two about mistakes, we get a quick visual look at some of their previous ill-conceived gifts: “the slingshot” (launches Pokko), “the balloon” (up, up, and away), and—my personal favorite—“the llama” (destroys the house).

Enter the drum. Just look at the excitement in Pokko’s eye and open mouth, at her outstretched arms, at the way in which Forsythe uses a diagonal orientation to draw out this feeling.

But Pokko’s excitement quickly eclipses that of her parents. “‘We shouldn’t have given her that drum,’ said her father.” “‘What?’ said her mother. ‘The drum is too loud, I can’t hear you.’” For the record, I can sympathize with Pokko’s parents. My youngest came out of the womb singing. Still today, she plays while singing, showers while singing, walks while singing. When she’s sick, I can always tell she’s feeling better when she starts singing again. This is all wonderful in theory…until she’s singing instead of eating, singing instead of putting on her shoes, singing to fill any shred of peace and quiet in the space she shares with other human beings. As a parent, I have sometimes felt like this:

If we’re being honest, we tend to get in the way of our children’s self-expression when it’s not convenient for us. As most children eventually discover, only when they get out from underneath their parents’ well-intentioned hankering for controlled chaos, can they begin to march freely to the beat of their own drum.

Pokko is no exception, even if her parents completely miss this point. When Pokko’s father sends her outside with her drum, he instructs her:

“But don’t make too much noise.
We’re just a little frog family
that lives in a mushroom, and
we don’t like drawing attention
to ourselves.”

Pokko, being an obliging only child, sets “out as quietly as she could.” Fortunately, though, the combination of the drum in her hands and the eerie quiet of the forest “sparkling like an emerald” proves too hard to resist. She begins tapping on her drum “just to keep herself company.” And something stirs behind her.

First, a raccoon follows her while playing a banjo. Turn the page and a trumpet-wielding rabbit joins in. A black wolf in an oversized farmer’s hat then takes up the rear, no instrument in hand, just “happy to be near the music.” 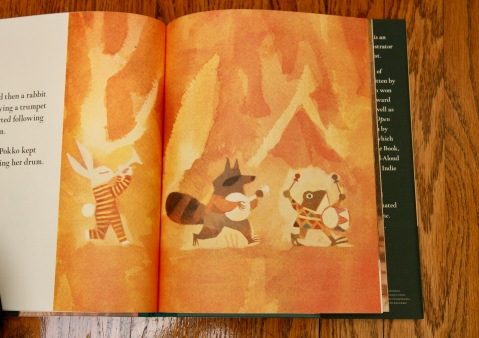 Here, lest we think we’re setting into a predictable plot, Forsythe gives us a touch of narrative whiplash without skipping a beat: “But then the wolf ate the rabbit, and Pokko stopped playing her drum and faced the wolf and said, ‘No more eating band members or you’re out of the band.’” Here’s where Forsythe has the pulse of his young reader. Children know firsthand the mayhem which can result when they’re organized into lines and asked to walk down school halls. What’s brilliant is that this presents an opportunity for Pokko to decide what kind of leader she wants to be. She chooses firm and compassionate.

With that, droves of animals join the parade—and not just the usual forest suspects, but hosts of eccentric figures I couldn’t identify if I tried. Many of them carry instruments, but many are content simply to follow in the wake of the music. We hardly have to imagine the sound for ourselves, as Forsythe makes such visual music from richly layering color and form and pattern. One spread is more dynamic than the next, building towards the story’s crescendo. 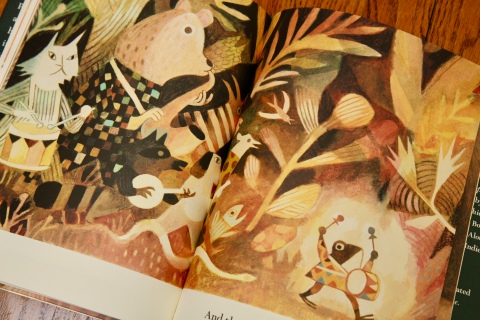 Back at home in the mushroom, Pokko’s father calls her for dinner. Only when he listens for her answer does he catch the sound of music in the distance. Across three separate page turns—Forsythe never missing an opportunity for suspense—the music grows louder.

Until the parade itself “swept through the house and carried Pokko’s parents off into the woods.” While the mother keeps her froggy nose in her book without missing a beat, Pokko’s father has a revelation: “I think she’s pretty good!” 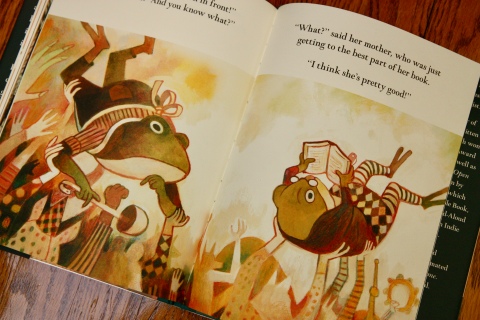 But Pokko doesn’t require affirmation, doesn’t even notice her father’s change of heart. She simply and confidently follows her own rhythm, right off the page and into the world beyond, inspiring an entire parade (including her parents) to follow.

Pokko and the Drum is enchanting from start to finish, from the cozy mushroom house to the visual feast of the forest, and all the unexpected wit in between. But if we read the story as an allegory, it’s also a wonderful reminder of the untapped creativity in our own children, an undercurrent which persists more often than it pulls back, assuming we parents can get out of the way. If we’re lucky, they’ll be so busy finding their own rhythm, they won’t even notice us cheering in the background.

Review copy by Simon & Schuster. All opinions are my own. Amazon.com affiliate links are above, although I prefer that we all shop local when we can!

§ 3 Responses to 2019 Gift Guide: My Favorite Read-Aloud of the Year (Finding Your Own Rhythm)

You are currently reading 2019 Gift Guide: My Favorite Read-Aloud of the Year (Finding Your Own Rhythm) at What to Read to Your Kids.