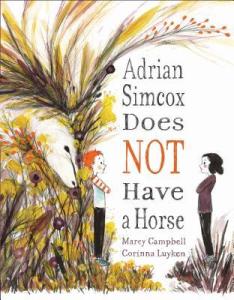 My daughter fibs. I realize that sounds harsh, like what kind of parent says that about her child? Shouldn’t I soften my words and say that she only pretends or exaggerates or bends the truth, because even though she’s only eight, she’s old enough to realize that sometimes the world looks better in our minds than it does in reality? Indeed, this is true. Still, she fibs.

“I give my allowance away to the poor every month,” Emily announced to a car full of older children on our way home from school. (Ummm, you’ve never done that.) Two years ago, when she was in Kindergarten, she started reporting nightly that her teachers were taking away recess time if even one child misbehaved; that she had not had a proper recess in weeks. Alarmed, I scheduled a meeting with her teachers, who looked at me oddly and said, no, they had never shortened or taken away anyone’s recess. (For the rest of that year, whenever Emily would report on “transgressions” done to her or others at school, she would preface them by saying, “Now don’t tell my teachers I told you this, but….”)

I can think of several reasons for Emily’s fibbing—attention, saving face, and my own proclivity for exaggeration jump to mind—but it’s entirely possible that there’s a less overt motivator at play, one which has everything to do with her older brother’s reaction. Because fibs like these drive him absolutely, positively insane. My son regards and remarks on the world with mathematical precision. He sees any casual statement by another as an opportunity for cross-examination.

“There is no way you swam a 400 butterfly in practice, Emily. It was a 200 tops, and even that is unlikely for a group of eight year olds.”

“I know how many laps it is, but I don’t feel like saying it right now.”

Author Marcy Campbell and illustrator Corinna Luyken have brilliantly captured the intersection of one child’s penchant for imagination with another’s rigid black-and-white thinking in my favorite picture book of 2018, Adrian Simcox Does NOT Have a Horse (Ages 6-9). A quiet but powerful story of developing empathy for those who experience the world differently than us, it is narrated in the stubborn, righteous voice of Chloe, who finds herself increasingly annoyed by one of her classmates, a red-haired loner of a boy named Adrian, who “tells anyone who will listen that he has a horse.”

Chloe tells anyone who will listen—her friends, her father, her mother—why Adrian is absolutely, positively fibbing. For one, she and Adrian live in a town (“and I know you have a can’t have a horse in a town”). For two, Chloe has on good authority from her friend Kelsey that horses are super expensive, and Adrian’s family is clearly poor (he gets free lunch at school and “his shoes have holes”). For three, horses require a lot of work, and Adrian can’t even keep his desk neat. 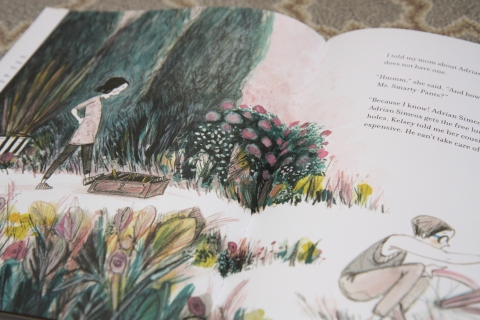 So why does Adrian spin tales of a “beautiful horse with its white coat and golden mane,” a horse with “the biggest, brownest eyes of any horse, anywhere?” And why does everyone but Chloe seem enchanted, even bewitched by this fiction; why do they refuse to see the cold, hard facts? The entire ordeal rattles Chloe to the core. It insults her mile-wide streak of justice. I know this, not only by the way she talks with her hands on her hips and her nose in the air, but because this is precisely how my son would regard such proclamations. He, too, might even stoop to what Chloe does next, vindictively exploding on the playground, “He’s lying! Adrian Simcox does NOT have a horse!” My son would think he was helping his victim, defending the Truth above all else, but he would also hopefully recognize the effect of his words.

Even though I was upside down,
I could see that made Adrian Simcox really sad. 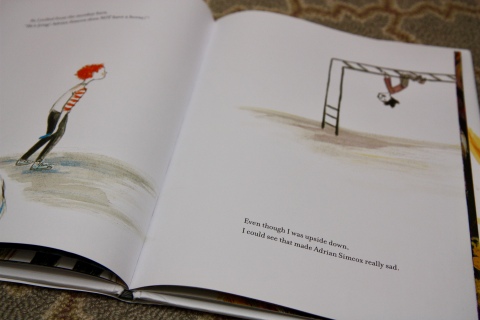 Still, Chloe is unmoved in her righteousness. When she returns home that evening, telling her mom “how Adrian was lying about his horse again,” her mom takes a page out of the show-not-tell-book of parenting. “Chloe, it’s time to take Chompers for a walk,” she says. (Chompers being their dog. Chompers being “a perfectly normal pet to have in town.”) With Chloe and the dog following, her mom marches down the street to a part of town clearly not frequented by Chloe. “All the houses looked like they might fall down, and even though it wasn’t trash day, it looked like it was.”

The mom, of course, is taking Chloe to where Adrian Simcox lives. With his grandfather. “I could see the backyard. It was no place for a horse, of course.” And yet, the careful reader will begin to see (and will enjoy flipping back pages to confirm) what it takes Chloe a few more pages to understand. That for everyone in the book who believes in Adrian’s horse—and, especially, for Adrian himself—there is the hint of a horse if we focus our eyes just right. Call it a ghost, a mirage, a trick of the eye. It is Adrian’s horse, and it is as much a part of the landscape as it is in his mind’s eye. 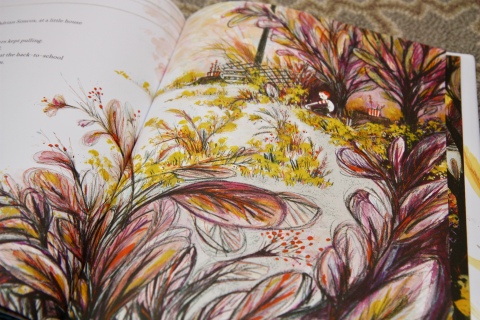 Corinna Luyken’s illustrations (we first fell in love with A Book of Mistakes) are nothing short of extraordinary, as much for the way she organically weaves the horse’s silhouette into her landscapes, as for the way she uses the horse as a kind of window into Adrian’s soul: the seeking curve of the horse’s neck, the gentle sweep of its mane, the kindness in its eye. Adrian doesn’t just want people to see his horse; he wants people to see him. To see past the rotten hand he has been dealt in the house and clothes and food and school supplies department.

Throughout the story, Luyken imbues each child with a specific color palette. Chloe is typically shown wearing or surrounded by rosy pinks and mauve, while Adrian is defined by his fiery orange hair, set off by deep golds. In the final page—when we at last can make out most of the horse’s body—the two palettes come together: blending, complementing, and producing something much more magnificent than the sum of its parts. 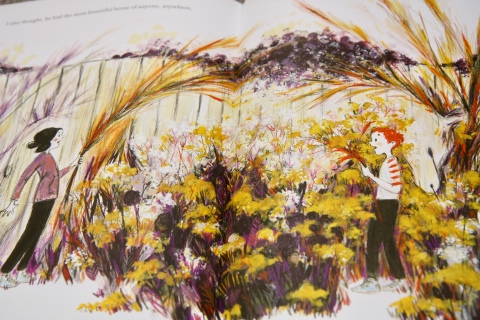 Did you enjoy this post? Make sure you don’t miss any others! Enter your email on the right hand side of my homepage, and you’ll be guaranteed to receive a new post in your inbox 2-4 times a month. Plus, follow me on Facebook (What To Read To Your Kids) and Twitter (@thebookmommy), where I regularly post articles and updates on what my kids are reading to themselves.

Review copy by Dial Books for Young Readers. All opinions are my own. Amazon.com affiliate links support my book-buying habit and contribute to my being able to share more great books with you–although I prefer that we all shop local when we can!

§ 2 Responses to Gift Guide 2018: Favorite Picture Book of the Year

You are currently reading Gift Guide 2018: Favorite Picture Book of the Year at What to Read to Your Kids.