These days, it’s rare that my son and daughter will gravitate towards the same picture book. Not because they don’t still enjoy picture books. Even though they read chapter books on their own—even though we’re always reading a chapter book (or two or three) together—both of my kids still adore picture books. I hope to nurture this love by leaving ever-changing baskets of picture books around the house. Long after children are reading chapter books, there is still so much to be gained from picture books, not the least of which is an introduction to a range of subjects alongside gorgeously vibrant, innovative art.

But as much as they love a good picture book, my kids are not often enamored with the same book. Which might be why the exceptions especially thrill me. This is partly why I’ve saved Patrick McCormick and Iacopo Bruno’s Sergeant Reckless: The True Story of the Little Horse Who Became a Hero (Ages 6-12) for my Gift Guide. If you’re looking for a book that hits both ends of the spectrum, this is it.

Might you know a girl, like mine, with a budding but fervent interest in horses? (“Remember, Mommy, you promised I would be old enough for horseback riding camp when I was seven,” says my seven-year-old Emily every day.) Might you know a boy, like mine, with a slightly unsettling, hopefully-age-appropriate obsession with war? (Overheard just yesterday, as JP was playing with his army figures: “Let’s stage the bloodiest battle in history!”) Got a kid who loves history? Loves an unlikely hero? You see where I’m going here.

Sergeant Reckless introduces us to the only animal to officially hold military rank in the United States: a lanky, reddish-brown, always-ravenous mare, who defied all odds to serve with the Fifth Marine Regiment Anti-Tank Company, heroically changing the course of the Korean War in its final months. 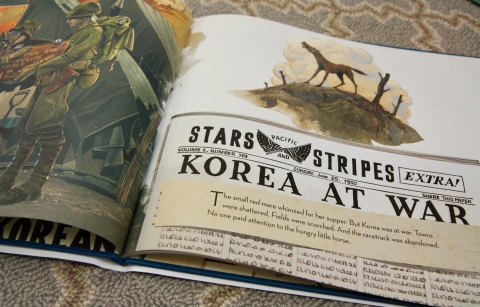 The story begins when Lt. Eric Pedersen sets eyes on the horse near an abandoned racetrack. Tasked with motivating men long exhausted from “hauling heavy ammunition uphill to a powerful new canon nicknamed the ‘reckless rifle,’ the lieutenant has long speculated on the value of a mule. The “scrawny sorrel mare” is no mule, “but she reminded him of a horse he’d had as a boy, so he took a chance on her.” 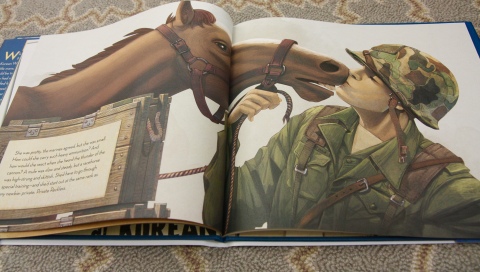 Pedersen’s fellow Marines aren’t sure what to make of the horse—referred to as Pvt. Reckless—who immediately begins sleeping, eating, and training in the tented base alongside the men. For starters, the horse has an unending appetite, one that quickly, without supervision, extends into non-edibles, including helmet liners and poker chips. But her love of the same things the Marines eat—oatmeal, peanut butter, chocolate, scrambled eggs, and even “ice-cold Coca-Cola”—means she is surprisingly fast to train. She quickly learns to kneel, retreat, follow, and, finally, to carry the bulky, loaded “packsaddle” which is instrumental to the Marines’ mission. Still, the men continue to question whether a skittish ex-racehorse is up to the task of working amidst unpredictable explosions, “white-hot flares,” and the chaos of battle. 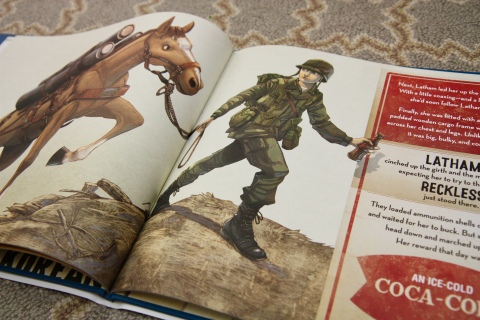 What becomes increasingly evident, both to the Marines and to us readers, is that Reckless’ larger-than-life appetite is matched by a playful humor and an unfaltering earnestness. We learn in the (excellent) Author’s Note that former journalist Patricia McCormick first learned about the equine hero from the cook of the Fifth Marine Regiment Anti-Tank Company, who told her stories about how the always-hungry Reckless would sneak into the cook’s tent in the early morning and lick him until he agreed to follow her to the mess hall. She was also a frequenter at the poker table.

The horse’s obvious affection, not only for food but for her fellow soldiers, extends onto the battle field. The first time Reckless witnesses the powerful cannon’s blast, she jumps straight into the air (“even with six shells on her back”); and yet, she quickly yields to calming strokes from the Marine’s hand. It isn’t long until she seems almost unfazed by the noise. Skirmish after skirmish, steadily and without fail, Reckless does her job, albeit with the help of chocolate bars tossed affectionately her way. 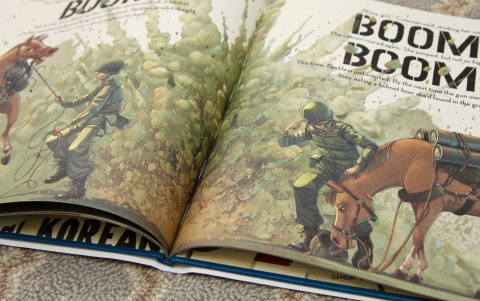 Reckless’ story culminates in the Battle of Outpost Vegas, an event spanning ten dramatic pages in the book and earning the mare two Purple Hearts. In a single day, over the course of fifty-one trips, the horse carries a total of nine thousand pounds of ammunition across thirty-five miles of steep terrain. When the cease fire comes at last, Reckless is promoted to sergeant and retired with full military honors. 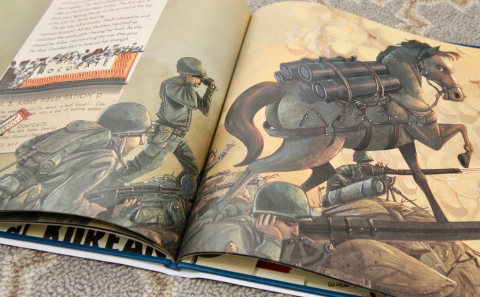 Italian illustrator Iacopo Bruno, whose art makes this already-fascinating story positively irresistibly, has long been attracted to unusual, less-known slices of history, often where an “underdog” surprises and surpasses. (His previous books have been hits in our house: my son was fascinated by Mesmerized: How Ben Franklin Solved a Mystery That Baffled All of France; and my daughter adores Anything But Ordinary Addie: The True Story of Adelaide Herrmann, Queen of Magic.) Bruno’s extraordinarily detailed illustrations—rendered in pencil and digitally colored—have a realistic, hand-chiseled look, which seems perfectly suited to historical narratives. What’s perhaps most remarkable here is that in a war story for young children (something we don’t often see in picture books), he doesn’t shy away from some of the harsh realities of violence—and yet, he counters it with the warmth of camaraderie, with the sweet, unwavering, two-way devotion of one animal to her Unit. 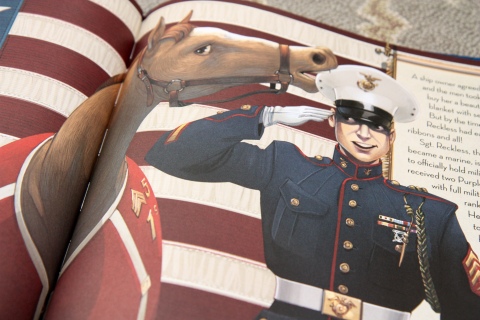 It’s this perfect union of drama and devotion which gives Sergeant Reckless its broad appeal. But it’s the story’s presentation of heroism, found in the most unlikely of subjects, which will endure long after the reader, boy or girl, closes the book. 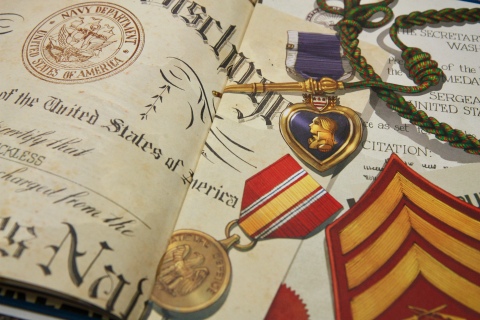 Did you enjoy this post? Make sure you don’t miss any others! Enter your email on the right hand side of my homepage, and you’ll receive a new post in your inbox each week (well, even more right now during the holidays).

Review copy provided by HarperCollins. All opinions are my own. Amazon.com affiliate links support my book-buying habit and contribute to my being able to share more great books with you–although I prefer that we all shop local when we can!

You are currently reading 2017 Gift Guide (No. 3): For the Underdog…well, Horse at What to Read to Your Kids.