A Statue on the Move

“Did you know the Statue of Liberty is moving?”

My son and my mother were leaning out over the Hudson River, craning to see the iconic green statue, on our recent trip to New York City to visit Grandma.

My mom looked up, confused. “They’re relocating the Statue of Liberty?”

“No,” JP said. “The statue is supposed to look like it’s moving. Her right foot is lifted like she’s taking a step. Most people don’t know that.”

In fact, this is my son’s (also my) favorite new fact to drop on people. Perhaps not quite as shocking as relaying that if all the sharks died, the oceans would eventually dry up—but pretty darn close. Because who stops on his way to gaze up at Lady Liberty’s seven-pointed crown and her iconic raised torch to look down at her heels?

We can thank literary wunderkind Dave Eggers for shedding light on this fascinating detail—and for authoring a 108-page children’s picture book that reads so quickly, so fluidly, and so hilariously, that we hardly realize we’re learning about the enduring symbolism behind the largest sculpture “in all the land.” This is a whole new interpretation of narrative non-fiction, and I love it. I can’t remember the last time a non-fiction book showed up on our doorstep and both kids promptly read the entire thing, cover to cover, to themselves, in one sitting. (Although the book is such a read-aloud delight I couldn’t resist reading it to them a few more times.)

Her Right Foot (Ages 6-12) assumes a conversational approach meant to surprise as much as delight, and artist Shawn Harris’ bold and contemporary paper collages brushed with India Ink perfectly complement Eggers’ signature irreverence. The book assumes the reader comes with a basic familiarity of the Statue of Liberty, including perhaps some mistaken assumptions.

I’ll admit to being as astounded as my children. Did you know that the most recognized symbol of immigration in the world was herself an immigrant?  As the book explains in its opening pages, the Statue of Liberty was not only designed in France as a gift to the United States on its one hundredth anniversary, but it was originally assembled to completion in Paris.

But it’s so much more fun when Eggers tells it:

Did you know this? Ask your friends and even your teachers if they knew that before the Statue of Liberty was assembled in New York, she was first constructed in Paris. Your friends and teachers will be astounded. They will be impressed. They might think you are fibbing.

But you are not fibbing. This really happened. The Statue of Liberty stood there, high above Paris, for almost a year, in 1884. 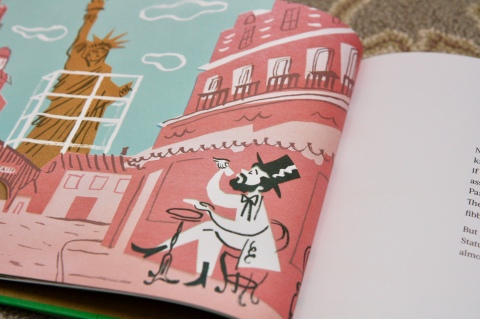 After they assembled the statue in Paris, they took it apart.

But we just put it together! the workers said.

That is absurd, they said.

They said all this in French, the language of the French, a people who appreciate the absurd. 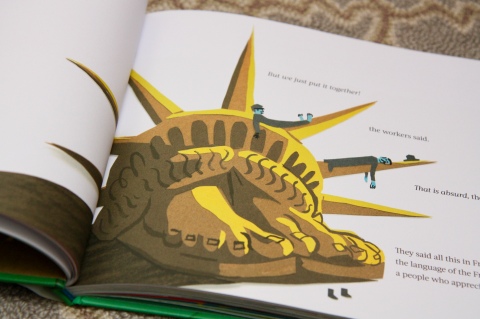 In other words, the Statue of Liberty once sailed across the sea to come to rest in America (in 214 crates, to be exact), much like the immigrants she welcomes every day. 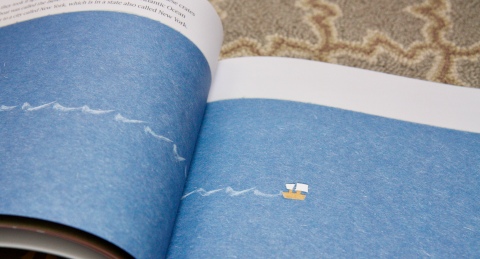 Eggers goes on to discuss the Statue’s assembling on what was then Bedloe’s Island, across from New York’s bustling harbor. My kids were especially interested to discover that the statue originally looked brown. Or perhaps they were especially interested in how Eggers chooses to explain this to his young readers: You may have thought the illustrator of this book was not so good at his job, because we all know the Statue of Liberty to be a certain greenish-blue. But the Statue of Liberty was made of copper, and copper starts out brown. In fact, it stayed brown for 35 years.

More of the Statue’s symbolism is unpacked, from her seven-pointed crown (seven seas, seven continents) to the book she holds with the signing date of the Declaration of Independence. Readers might already know that the torch she carries “is a symbol of enlightenment, lighting the path to liberty and freedom,” but it’s unlikely any child knows that Thomas Edison once proposed to put a giant record player inside the Lady so she could speak. (In the end, though, this idea was considered a bit strange and was not pursued.) Or that a dinner party once took place inside the statue for a bunch of gourmand French writers.

All this spans the book’s first half and is a compelling build up to Eggers’ central and favorite revelation, something he noticed when visiting the Statue with his family a few years ago. The Statue of Liberty, as it turns out, is anything but statuesque. This 150-foot woman, weighing 450,000 pounds and sporting a 879 size shoe, is on the move. Her entire right leg is constructed mid-stride, her foot lifting out of bondage chains which lie broken at her feet. Why is this detail omitted in so many lessons and books about the Statue of Liberty? More importantly, Eggers asks, what does it mean?

Where is she going? 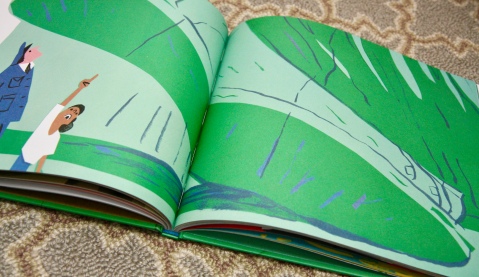 After some tongue-and-cheek responses which perhaps have more hipster than kid appeal (Is she going to the West Village for her vintage Nico records?), Eggers settles into a gentle but deeply moving 17-page meditation on what it means to honor the journey of immigrants and refugees. On what it means to welcome Italians, Polish, Norwegians, Glaswegians, Cambodians, Estonians, Somalis, Nepalis, Syrians, and Liberians. 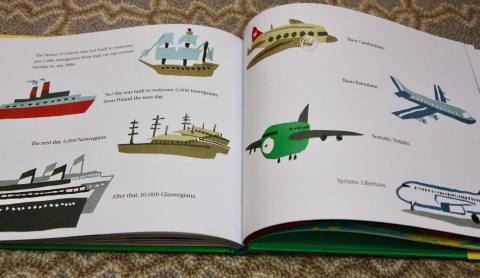 On what it means to give promise to “the poor, the tired, the struggling to breathe free.” 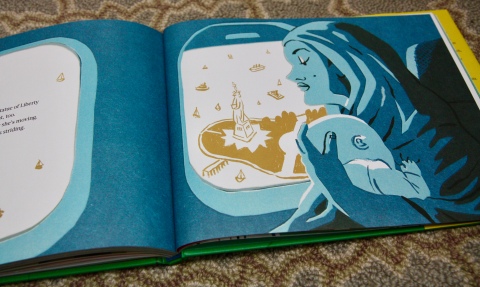 Liberty and freedom from oppression are not things you get or grant by standing around like some kind of a statue. No! These are things that require action. Courage. An unwillingness to rest.

She must meet them in the sea.

We don’t know for sure why the Statue’s foot is raised or what the artist intended. But Eggers’ theory hits all the right notes—and is as timely as ever. Our Lady Liberty is a mover, a shaker, and an empathizer.

In last night’s election results here in Virginia, a refreshing picture of inclusion emerged. Among other firsts for positions in our state government were an openly transgender female, an Asian-American woman, and two Latina delegates. The city of Hoboken, New Jersey elected its first-ever Sikh mayor. I am hopeful for the first time in many months that Americans are moving towards embracing a vision of patriotism based on the melting pot out of which our country’s greatness will emerge.

But, as Lady Liberty herself reminds us, there is always more to be done. More steps to take.

Review copy provided by Chronicle Books. All opinions are my own. Amazon.com affiliate links support my book-buying habit and contribute to my being able to share more great books with you–although I prefer that we all shop local when we can!

§ 3 Responses to A Statue on the Move

You are currently reading A Statue on the Move at What to Read to Your Kids.