In the Footsteps of the Suffragists

January 19, 2017 Comments Off on In the Footsteps of the Suffragists

This Saturday, following Donald Trump’s inauguration as the 45th president of the United States of America, possibly a million or more women will participate in organized marches all over the country, a vehement and vocal response to the objectifying, demeaning, and hostile rhetoric towards women (as well as minority populations) that the president elect boastfully carries with him into office. It will be our way of ensuring that these sentiments are not normalized, that they are not translated into policy, and that they will not turn back the clock to a past that, just a handful of months ago, felt to many (myself included) blessedly out of date.

This past weekend, as I shared with my children Doreen Rappaport’s new picture book, Elizabeth Started All the Trouble (Ages 6-10)—a highly engaging introduction to the 75-year-long suffrage movement started by Elizabeth Cady Stanton in 1848—I was reminded of the legacy of women that stand at our backs, a legacy that suddenly feels hauntingly close.

If history is doomed to repeat itself, then we are taking to the streets in 2017 to ensure, in the very best of ways, that it does. Because, as Rappaport reminds us, women who stand up and speak out and do so again and again will force fissures on the most stubbornly patriarchal, racist, and xenophobic obstacles. And it would appear our work is far from finished. 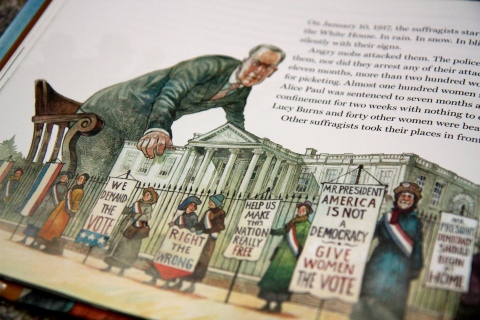 My own children, captivated by Matt Faulkner’s illustrations of the various signs held up by generations of protesting women—“Vote for Equality,” “Equal Pay for Equal Work,” “Respect Your Mother Earth,” “Failure is Impossible,” and “No H8”—were surprisingly quick to point out, “Mommy, people could make those same signs for the March next weekend. They’re still true, aren’t they?” It seems our children are already privy to a living, breathing resistance movement, the likes of which many of us previously glimpsed only in history books.

What I perhaps enjoy most about Elizabeth Started All the Trouble is that, contrary to what its title suggests, it is less concerned with one player in history and more concerned with the diversity of trailblazers and game changers. Elizabeth Cady Stanton and Lucretia Mott may have formalized a document demanding women’s rights at the historic convention at Seneca Falls, NY on July 13, 1848, but our author suggests that the fight for women’s equality began with our country’s founding mothers. Rappaport’s book opens with a prescient warning delivered over 235 years ago by Abigail Adams to her husband, John, during his work drafting laws for an America that had just declared independence from Britain.

Abigail was ecstatic. She wanted independence as much as John did. But she was worried: Would women be included in the new laws? She warned John that if women were not remembered, they would start their own revolution.

John laughed at her.

It took much longer than Abigail wanted for that revolution to begin. But if finally started, seventy-two years later.

While this eventual “revolution” would most dramatically center on a woman’s right to vote—a pursuit immortalized by Stanton and Mott and adopted by Susan B. Anthony—it was also about fighting against “all the unfair laws against women written by men.”

In that spirit, the book incorporates many of the “firsts” that took place alongside the suffrage movement: Amelia Bloomer, who advocated women trading in their fourteen-pound petticoats for less cumbersome clothing; Mary Lyon, who founded Mount Holyoke College, where women could study the same subjects as men; Elizabeth and Emily Blackwell, who opened the first medical school to women; and Lucy Stone, who refused to say the word “obey” in her marriage vows and kept her name in the spirit of “equal partnership.” Young readers may well come away from this book with plans for additional research subjects. 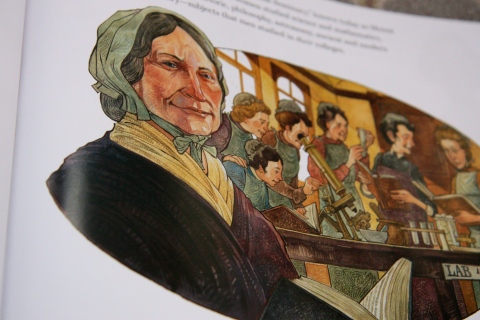 Author Rappaport doesn’t shy away from exposing the hypocrisies embedded in this part of American history either, particularly where the rights of women and African Americans intersected. Stanton and Mott were initially involved in abolitionism—and yet, even as they were allowed in the same room as delegates debating the issue of slavery, they were forced as women to sit behind a curtain so they could not be seen. “How could men who were against slavery deny women their rights just because they were women?” the book asks.

In another example, the freed slave Sojourner Truth “caused quite a stir” at a suffragist meeting by pointing out the gross differences between the treatment of white women versus black women: “That man over there says that women need to be helped into carriages, and lifted over ditches, and to have the best places everywhere…Nobody ever helps me into carriages, or over mud puddles, or gives me any best place! And ain’t I a woman?”

The right to vote remains the greatest and most opposed struggle of the women’s rights movement, and author Rappaport (with her dramatic pacing) and illustrator Faulkner (with his distortions of perspective) do a stellar job of eliciting awe for the fight it was. What strikes me most in these pages is just how long the suffrage movement endured—how many speeches and marches took place (in snow, rain, hail, and blizzards); how many times people faced name calling, physical attacks, and even imprisonment. This Saturday’s march is daunting enough—but what’s more daunting is that it’s less than a fraction of what our predecessors did! 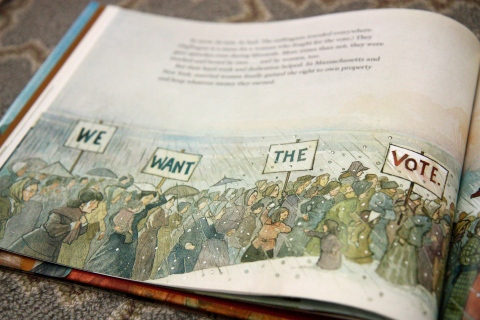 In the end—and if their struggle wasn’t tortuous enough—most of the longest fighting suffragists did not live to see August 26, 1920, the date in which women were lawfully granted the right to vote with the passing of the Nineteenth Amendment (although, as Jonah Winter’s powerful Lillian’s Right to Vote reveals, that was not the final word for African-American women). 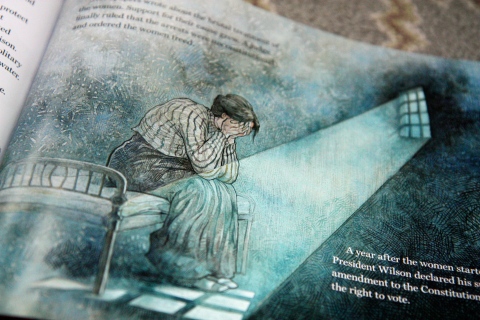 Recently in the car, I was listening to an interview on Ted Radio Hour with Krista Tippett, host of the public-radio show “On Being,” She was discussing her Ted Talk on the subject of compassion, and she spoke about what she believes is a frequent misunderstanding of the word. “Compassion is not necessarily about agreeing with someone else,” she says. “It’s not necessarily even about liking them. It is about making a choice to honor their humanity.”

It strikes me that this Saturday’s march—and the future demonstrations which are certain to follow—are, at their core, about just that: about reminding our government, our fellow citizens, and everyone around the world that the simple fact of being human demands that we begin from a place of respect and decency. The United States of America was founded on the promise of freedom and equality. We may have needed frequent reminders of this promise over our 241 years as a country—we are seeing now that we cannot grow complacent—but we will never let our humanity be eclipsed.

Books like Elizabeth Started All the Trouble invite our children into the rich tapestry of activism which continues to shape the way we—both men and women—should be able to live.

Other Favorites About the Women’s Rights Movement:
Elizabeth Leads the Way: Elizabeth Cady Stanton and the Right to Vote, by Tanya Lee Stone & Rebecca Gibbon
Around America to Win the Vote: Two Suffragists, a Kitten, and 10,000 Miles, by Mara Rockliff
Lillian’s Right to Vote: A Celebration of the Voting Rights Act of 1965, by Jonah Winter (my post here)
Brave Girl: Clara and the Shirtwaist Makers Strike of 1909, by Michelle Markel & Melissa Sweet (my post here)
Who Says Women Can’t Be Doctors? The Story of Elizabeth Blackwell, by Tanya Lee Stone & Marjorie Priceman
I Dissent: Ruth Bader Ginsburg Makes Her Mark, by Debbie Levy & Elizabeth Braddeley

Book published by Disney Hyperion. All opinions are my own. Amazon.com affiliate links support my book-buying habit and contribute to my being able to share more great books with you–although I prefer that we all shop local when we can!

You are currently reading In the Footsteps of the Suffragists at What to Read to Your Kids.