In what increasingly feels like the Age of Excess, one of my greatest parenting rushes has become the Art of Purging. Quick, toss the stacks of paint-splotched easel paper while the kids are still at school! Drag missing-pieced toys to the curb as the garbage truck rounds the corner! Bag up old PJs, hats, and shoes for Goodwill! I look around my newly streamlined rooms and closets and feel a brief, momentary thrill. In a matter of weeks, it will feel like I need to purge again.

While we’re busy tossing out, our children are busy holding on. “Wait! I want to save my (broken) balance bike for my own children!” my son laments. “Can we put my old dresses in my memory box?” asks my daughter.

It recently dawned on me that, if left to their own devices, children make marvelous recyclers. This past fall, on a Sunday morning, while my husband was overseas for work (read: far, far away), I lay in bed burning up with a fever and cursing the Murphy’s Law of Motherhood, whereby moms only fall prey to The Plague when we’re on our own with no one around to help. I drifted in and out of sleep and didn’t realize until it was approaching lunchtime that my children had been awake and downstairs for hours. My son poked his head in: “Hi, Mommy. It’s OK, you don’t need to come down. I just wanted to let you know that we have been playing with the recycling.”

At some point, I made my way downstairs and discovered these two Cardboard Box Robots, made exclusively from the overflowing contents of our recycling bin: 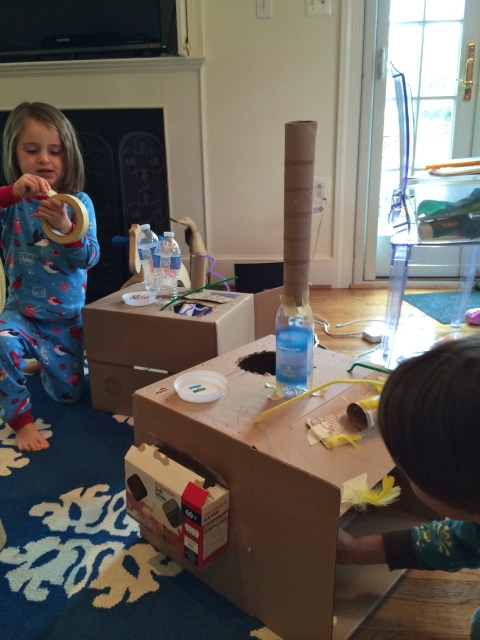 These creations, of my children’s own doing, had bewitched them into an entire morning of collaborative work and play. Maybe it was the fever talking; maybe not. All I know is that I was witnessing a RECYCLING MIRACLE. (Remember this post about the magic of cardboard boxes?)

It got me thinking about how much my children love Jim Aylesworth and Barbara McClintock’s My Grandfather’s Coat (Ages 3-7), which was published last year, but which is loosely based on the age-old Yiddish folksong, “I Had a Little Overcoat.” This reworked tale, about a young Eastern European immigrant, who arrives on Ellis Island with “little more than nothing at all” (literally, the contents of two small bags), couldn’t feel further removed from my children’s own reality. And yet, the story’s underlying message of reuse—of turning the old into the new—rings true to something innate, something universal inside them.

Aylesworth, with his love of a catchy refrain, and McClintock, with her signature pen-and-ink, deliciously old-fashioned watercolors, have collaborated on many fairytales and folktales over the years. One might say that they are experts at breathing new life into old treasures (see my lengthy list of favorites at the end). My Grandfather’s Coat, which is narrated by the main character’s adult granddaughter, as she reads to her own son, spans the major milestones in her grandfather’s life, including coming to America, finding work as a tailor, getting married, having a child, opening his own shop, and welcoming his grandchild (i.e. her).

The unifying thread is a handsome navy blue coat, which, in preparation for his wedding day, the grandfather “snipped, and he clipped, and he stitched, and he sewed.” 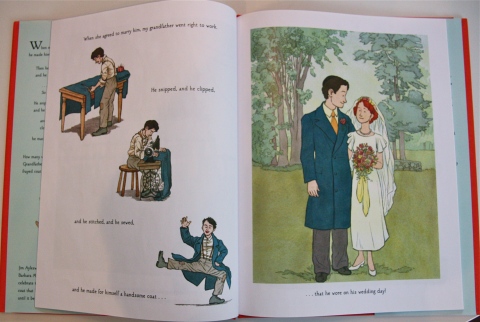 So did “my grandfather” toss it in a box for Goodwill and move on? Of course not! He put his tailoring skills to use, and out of the “still-good cloth,” fashioned a “smart jacket”…then later a “snazzy vest”…a “stylish tie” (which he wears to walk his daughter down the aisle)…and, finally, a little stuffed mouse for his great-grandson.

While the text is concerned almost exclusively with the transformation of the grandfather’s coat, McClintock’s illustrations paint a much richer portrait of the man himself. From the pictures, we learn as much about the grandfather’s day-to-day life (feeding chickens, playing baseball, celebrating Hanukkah, holding his granddaughter’s hands as she takes tentative steps), as we do about his major milestones. On every page, we catch glimpses of his playfulness, his mindfulness, his work ethic, and his tenderness—as well as his evident pride in the life he has created for himself and his family.

Trust me. This is a man you want to know. (Much like another inspiring immigrant story that I discussed here.)

Not many children’s books star grown-ups as main characters; nor do many boast story lines about the adult aging process. At first glance, some might assume this book wouldn’t hold appeal for young children. But you’d have only to drop by our house, during one of the many times I’m asked to read this book, to understand otherwise. My children’s pointer fingers are constantly employed as we read. They show me: “See how his hair is getting greyer? See how long her hair is now? See how the curtains are much fancier here?” They may know the story inside and out; and yet, each time we read it, they relish new discoveries.

Perhaps we should not be so quick to squash our children’s natural resourcefulness with our own zeal for purging. Perhaps, as my New Year’s Resolution, I will take a second (or a third or a fourth) look at what’s old and consider how it might be made new again. At the very least, let us never toss aside our memories: the stories of our past and the past of the generations that have paved the way for us.

(But did I mention that the Box Robots are now sitting in our basement blocking my path to the washing machine?)

Out of print but SO worth getting if you can: The Fantastic Drawings of Danielle, The Tale of Tricky Fox, Dahlia, Molly and the Magic Wishbone…we read my beloved copies ALL THE TIME. So good.

Review copy provided by Scholastic. All opinions are my own. Amazon.com affiliate links support my book-buying habit and contribute to my being able to share more great books with you–although I prefer that we all shop local when we can!

§ One Response to What’s Old is New Again

You are currently reading What’s Old is New Again at What to Read to Your Kids.