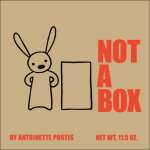 For adults, the worst part about moving is cardboard boxes. For kids, the best part about moving is cardboard boxes! We managed to save a giant wardrobe box from our last move, and we bring it out on rainy days. It’s the Mother of All Boxes. Don’t get me wrong: they also love playing with diaper boxes, amazon.com boxes, and wine boxes (that these seem to be the predominant boxes around our house at any given time probably says much about our priorities). Our “house rule,” when a new box shows up, is that the kids get it for one week—and then (because Mom can’t take it any longer) it’s dumped in the recycling bin, regardless of how beautifully decorated it is by then. But that wardrobe box is still kicking around some 18 months later, because, well, it’s just THAT AWESOME. One of the more originally executed children’s books of the past decade is Not a Box (Ages 3-5), by Antoinette Portis. The book deceives: at first glance, its sparse text and simple graphics appear to be designed for a very young child. In fact, the perfect audience for this book is the precocious preschooler, who’s just beginning to forage into Imaginary Play. Through a little bunny’s mind, a simple cardboard box becomes a burning building, a hot air balloon, a robot, or a rocket, among other things. Like said bunny, my own preschooler can come up with endless roles for a cardboard box. Sure, he sat through the book when he was a two year old, but it wasn’t until he turned three that he finally “got” it, that he related not only to the bunny’s pretending but also to the bunny’s frustration each time the narrator asks him about his “box” and gets the answer, “It’s NOT a box!” Ah, to be young again, where our imagination can totally usurp daily life! Why just tonight, when I was pointing out to JP that I was still seated at the dinner table because I hadn’t yet finished my food, his answer was “But Mommy, firefighters have to leave EVERYTHING when the alarm goes off!” (What was I thinking?) Another reason why this book is lost on a younger audience is in its unique (out-of-the-box, if you will) outside: with its matte-finish, brown-paper, and jacketless cover, the book itself resembles a cardboard box (just make sure you get your hands on the hardcover, as the recently-released board book edition falls flat in this regard). Like with so many things, sometimes the best books (and boxes) are worth waiting for.

Other Favorites About Pretending With Boxes (& Sofa Cushions):
King Jack and the Dragon, by Peter Bently & Helen Oxenbury
Sitting In My Box, by Dee Lillegard & Jon Agee
A House is a House for Me, by Mary Ann Hoberman

You are currently reading Ce N’est Pas Un Box at What to Read to Your Kids.