In the canon of children’s literature, there is perhaps no character more reliable than the bear. When in doubt, put a bear on the cover and little hands will want to open it. In past decades, we’ve fallen in love with bears who have lost their buttons (Corduroy), or lost their mothers (Blueberries for Sal); with bears who have a vivid imagination (Little Bear), and bears who’ve let that imagination run away with them (The Berenstain Bears and the Spooky Old Tree). The trend hasn’t slowed in recent years, as evidenced by these two newcomers, both of which will be guaranteed hits should you have any preschool-aged birthday parties in your future.

The premises of Jory John and Benji Davies’ Goodnight Already! (Ages 3-6) and Sophy Henn’s Where Bear? (Ages 3-6) are not particularly novel in and of themselves. Goodnight Already!, starring a Bear who wants only to sleep and his pesky neighbor Duck who wants only to keep him awake, reminds us of favorites like A Bedtime for Bear. Similarly, Where Bear?, about a boy who decides to deliver his pet polar bear to his natural habitat, recalls favorites like Oliver Jeffers’ Lost and Found, or even the darling story that I wrote about during last year’s Polar Vortex.

That these may be story lines that you or your kids have heard before doesn’t actually matter. What does matter is that, in both of these new picture books, the comedic timing and the bold, modern art are 100% unique. And 100% fun. I’m including them in the same post because, as my children instantly pointed out, there are striking aesthetic similarities between the two, most notably the flatness of the art and the retro color palettes. In both cases, the art and text are in perfect harmony, playing off each other to heighten the drama on every page.

But the best news—and why you should give these as gifts—is that no parent will mind reading them 713 times. In a row. Because, if my children are any indication, this is what will happen. And you don’t want to make enemies of the parents of your children’s friends. 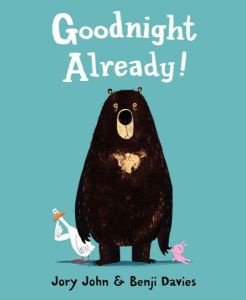 Let’s start with Goodnight Already!, which is told largely through the conversational banter between two friends, one exceedingly tired and cranky, and one insufferably over-caffeinated and peppy. Poor Bear wants a long, uninterrupted night’s sleep; and poor Duck wants someone to pay attention to him.

Relate much? Hell hath no fury like a Mama being kept from her sleep.  Now add to that spot-on repetition, dry wit, and perfectly placed visual gags (like the pink stuffed bunny that Bear tucks in beside him, or the sagging dark bags under his eyes)—and you have a flawless rendition of Theater of the Absurd, guaranteed to invoke giggles galore from young and old alike.

Over the holidays, I was sitting next to my daughter on an airplane. The hum of the engine, coupled with the stifling air, was making my eyelids heavier and heavier. Suddenly, I was startled awake by Emily tapping me on the nose. Just as I was about to launch into a lecture about how we DO NOT WAKE PEOPLE BY TAPPING THEM ON THE NOSE, I registered her wide grin and realized she was setting me up. She was taking a play from Duck, and she wanted me to respond as Bear. (She knows I can’t resist a chance to perform.) So we ran through these pages by memory:

We repeated the sequence a few times until the two of us were in hysterics (Emily can hardly say “I stubbed my beak” without DYING laughing) and receiving more than a few inquisitive glances from fellow passengers. So there: when you give Goodnight Already!, you aren’t just giving a bedtime story; you’re giving built-in entertainment even when the book isn’t around. There is nothing as contagious as silliness.

If Goodnight Already! is characterized by accelerated folly, then the charm of Where Bear? lies in its understatement. Where Davies gave us a wealth expression in and around the eyes, Henn’s crude, compelling brushstrokes communicate a depth of emotion from body posture alone. “Once there was a bear cub…who lived with a little boy.” Immediately, we know how much the boy adores his friend simply by the way he moves in relation to him.

But bears will be bears—and even the boy begins to see that his bear is growing too large and unruly for a human-sized house. (One of the many gems of this story lies in the complete absence of parental presence; the boy’s relationship with the bear reigns uninhibited by adult scrutiny.)

The question, repeated throughout the book, becomes, where should the boy take the bear to live? Each time, the boy addresses this question to the bear—and each time, without waiting for a response, the boy goes on to volunteer an answer. (Sound familiar? Anyone?) “‘Oh, hang on! There are bears at the zoo!’ said the boy. ‘What about the zoo?’” After a brief trial and error at the local zoo, the Bear pronounces a definitive “No.” And so the search continues: the boy offering up the circus, the toy store, the forest, the jungle, and a cave, all as habitat possibilities. My kids adore the way Henn plays with the font of the various “No”s, so that each one takes on a different sound in our own readings.

Not surprisingly, the bear’s perfect new home turns out to be the Arctic.

But where most boy-releases-animal stories would end there, did I mention that the two still telephone one another?

Well, duh. They need to plan vacations together to catch up. Now don’t you wish you could tag along with them right about now? Put the birthday present in the mail, skip the party, and let’s go have some real fun.

Review copy of Where Bear? provided by Penguin. All opinions are my own. Amazon.com affiliate links support my book-buying habit and contribute to my being able to share more great books with you–although I prefer that we all shop local when we can!

You are currently reading Fun With Funny Bears at What to Read to Your Kids.