Let’s Hear it for the Birds 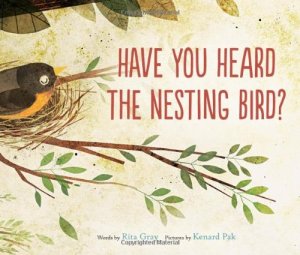 We’re all about birds this spring. Well, to be fair, I’m all about birds, but I’m filling my kids’ baskets with bird-related books, in hopes that they will catch on, too. I can’t help myself. There’s something about Spring Fever that drives me to obsess about some natural wonder alive and transforming outside my window (see past years’ obsessions with trees and worms). And what better way to drag my children along on this journey than through non-fiction picture books, which pair beautiful illustrations and poetic text with fascinating information?

I didn’t exactly choose birds as this year’s subject matter. They chose me. They chose me by waking me up at 4:30am with their frantic, high-pitched chirping. They chose me by making a nest between our roof and my bedroom ceiling, fast and furious work that sounded as if a much larger animal was ripping down sheets of metal. They chose me by distracting my children over breakfast, encouraging bowls of oatmeal to sit half-eaten, in favor of watching a pair of cardinals dancing in the dogwood outside our dining room window (my children are convinced that “Buddy” and “Lady Buddy” followed us two years ago when we moved up the hill to our current house). Let’s just say that the time seemed ripe to learn a thing or ten about the busy birds around us.

What I discovered was a treasure trove of non-fiction picture books starring birds, many published in recent years. I’ve shared my complete list of favorites at the end (with picks through age 10), but I had so much trouble choosing one to focus on here, that I have to expound on two. The first is Rita Gray’s Have You Heard the Nesting Bird? (Ages 3-6), illustrated by Kenard Pak. This is one of those deceptively simple picture books that educates as it delights. On the surface, it’s an introduction to different bird calls, as witnessed by two children in their backyard. Each of the 12 unique songs begs to be “tried out” by the listener, and in fact the kids in Emily’s school did just that, repeating the sounds back to me when I read the book aloud to them recently. “Woodpecker calls from a tree with a hole. cuk-cuk-cuk-cuk-cuk Starling sings from a metal pole. whistle-ee-wee-tree”

Here, the cardinal and the chickadee weigh in with their cries.

But for all its emphasis on sound, the heart of the book is concerned with a quiet mystery: that of the nesting robin, who sits in silence on her eggs. Again and again, amidst the other bids’ noisy chatter, the children in the book pause to wonder at the robin: “But have you heard the nesting bird? ‘Not a single tweet or trill.’ ‘This nesting bird is so still.’” Pak’s subdued, rustic watercolors make copious use of the white on the page, drawing our attention to the features of the different birds. The one exception (and my daughter’s favorite) is an almost haunting double-page spread of the children’s house on a windy, moonless night, where a close look reveals the female robin in her nest, stoic and vulnerable against the natural elements. The book’s informative afterward (my son’s favorite part) addresses the nesting bird’s silence in a clever Q and A between robin and author: “I don’t want other animals to know I am hiding eggs! They might eat them!” Even when the eggs do hatch, the robin tells us, she must scatter and bury the eggshells far from the nest, in order to throw off hungry predators. Man, I love it when I learn as much as my kids do from a book! 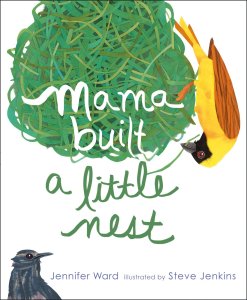 If you’ve been following this blog for awhile, it will probably come as no surprise that my other pick is illustrated by the astounding naturalist artist, Steve Jenkins (we are still reading The Animal Book daily in our house). Written by Jennifer Ward, Mama Built a Little Nest (Ages 4-8) again plays to different levels of engagement. Each page sports a sweet four-line poem, which begins “Mama built a little nest” and goes on to describe the construction of a particular type of bird nest. Jenkins’ corresponding, vividly realistic cut-paper collage is captioned with additional data, including the species’ name. Children are exposed to different nesting materials (from spiderweb to spit); different nest placement (from “craggy ledges” high off the ground to the firmly-planted feet of a Daddy emperor penguin); and different nesting strategies (in wrens, it’s the male that constructs the nest—actually, several of them—in an effort to win over the female). Did you know that some birds (like the cuckoo) don’t make their own nests, but instead drop their eggs into the nest of another, like the robin, for that Mama to take care of? Once again, the kids and I are learning things left and right.

The book’s ending draws the parallel between a bird’s nest and a human’s bed, the place where we get to rest our head on “pillows soft and cozy thoughts.” I think I might visit my nest right now. Maybe I will change Rest Time to Nest Time. Either way, we won’t be asleep long before those noisy wing flappers wake us up.

Other Favorite Non-Fiction Picture Books About Birds:
Birds by Kevin Henkes (Ages 2-5)
About Birds: A Guide for Children by Cathryn & John Sill (Ages 4-8; incidentally, the entire About series is wonderful, especially for preschools and kindergarten classrooms looking to own a series about the natural world that works on many levels)
Feathers: Not Just for Flying by Melissa Stewart & Sarah S. Brannen (Ages 6-9)
Look Up! Bird Watching in Your Own Backyard by Annette LeBlanc Cate (Ages 6-10)
The Boy Who Drew Birds: A Story of John James Audubon by Jacqueline Davies & Melissa Sweet (Ages 6-10)
Parrots Over Puerto Rico by Cindy Trumbore & Susan L. Roth (Ages 6-10)

§ One Response to Let’s Hear it for the Birds

You are currently reading Let’s Hear it for the Birds at What to Read to Your Kids.