The Story Behind the Gift (In Honor of Mother’s Day)

Last year, at about this time, JP came home from school proudly toting a plastic grocery bag filled with the contents of his “work drawer.” I was nearly giddy with excitement at the prospect of getting a glimpse into his work over the past few months, endeavors in addition and subtraction, story writing, and cursive practice, about which I had heard only mumblings in response to my daily inquisition, “What did you do at school?” After we ate snack together and his sister had lost herself in a project, I sat down, folded my hands on the dining room table, and watched eagerly as JP began to unpack the bag’s contents. Not many “oohs” and “ahhs” had gone by, before I realized that most of papers bore the signatures of other children. Daphne. Josh. Helena. “But, honey, where’s the work that you did?” I finally asked. And, as if that was the silliest question in the world (duh), JP informed me: “I gave it away to my friends!”

It wasn’t but a few days later that I casually mentioned this exchange to JP’s teacher. I know Montessori is more about the process than the end result, I told her, but wouldn’t it be nice to see some tangible results of my tuition, ha ha ha? “It is ironic, isn’t it,” she replied. “We spend years hoping, pleading, begging our children to share. Then we complain when they want to give everything away.” How true!

Generosity, like kindness, is something we can’t “teach” children. We can do our best to model it ourselves, and we can celebrate it when we do witness it in our kids, hoping that our excitement and pride reinforces these moments. Early on, well before I had kids of my own, I read somewhere: “Never refuse a gift from a child.” I was reminded of these words years later, when JP was three years old, and my husband and I invited a couple and their new baby over for brunch. It was a new friendship, and we were getting to know one another, while also trying to heed the demands of our respective children. Perhaps out of boredom, perhaps out of a desire to insert himself into the conversation, JP approached the father, held out his hand, and revealed a lumpy grey rock. “This is for you,” he said. The man smiled, said thank you, and put the rock down next to him on the arm of the sofa, where JP and I both stared at it. “That’s actually a very special rock,” I couldn’t help but venture, because I knew that this was a rock JP had discovered on the playground earlier that week, believing it to be the most beautiful rock in the world, believing it to be vastly different from the 10,000 other rocks he would encounter and want to bring home in the months ahead. For JP to bestow this rock on a near stranger was, I knew, a big deal. A few hours later, while I was doing dishes, JP came to me: “Mommy, the man left the rock I gave him. Should we mail it to him?” And my heart broke a little. I couldn’t blame our friend, who might have thought he was doing JP a favor by letting him keep his rock. I might have done the same thing had I not once been warned: Always accept what a child gives you, no matter how bizarre or lumpy or inconsequential it seems.

With children, sometimes the story behind the gift is actually more important, more heart-tugging, than the gift itself. The tricky part is that we as adults aren’t always privy to this backstory (case in point: how could our friend have known the pains JP had taken to carry back this rock from the playground, with no pockets and while simultaneously riding a balance bike?). One backstory that we are privy to lies in Linda Ravin Lodding’s lovely new picture book, A Gift for Mama (Ages 3-7), illustrated by the great Alison Jay. Alison Jay needs no introduction from me, since I’ve hailed her as one of my favorite contemporary illustrators time and time again, but let me just say that her romantic crackle-glazed art is perfectly suited for a story set in turn-of-the-century Vienna, a time of the Opera House, Hofburg Palace, elegant carriages, Gustav Klimt—not to mention shops teeming with lavish hats and exquisite pastries (seriously, my bags are packed). A little boy searches for a present for his mother’s birthday. While he initially uses his money to purchase a single yellow rose (“the perfect present!”), as he makes his way home through the bustling cobblestone streets, he continually stumbles upon people in need of what he has. The rose unleashes a chain of events, whereby the boy trades it to an artist in exchange for a paintbrush (“Of course! I can paint a picture for Mama—the perfect present!”); he then trades the paintbrush to a conductor (who wants to use it as a baton) in exchange for sheet music, which in turn goes to a writer in exchange for a book, and so on. 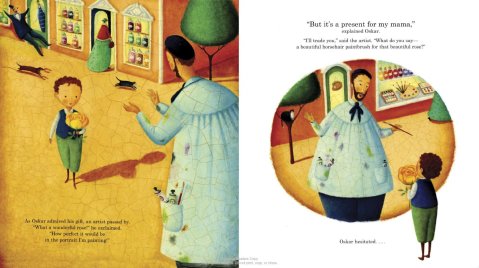 Oskar’s encounter with the Klimt-inspired painter. I love how Jay has captured the pride and brief hesitation Oskar has (holding tight to that rose), the eccentricity and over-sized gestures of the painter, the candy shop in the background, and a man being knocked off his feet by a dog chasing a cat.

Sweet, rosy-cheeked Oskar does his very best to find the silver lining in each trade, although he gives up his last gift expecting nothing in return: bestowing a box of candied violets on a crying girl, who also has a mother with a birthday and no present. As Oskar walks home against the setting sun, hands empty and head bent, the girl chases after him to offer him the very yellow rose with which he began his day. At home, he presents his gift to Mama, who enfolds him in her arms. “‘Perfect,’ she said.” Little does she know the Journey of Generosity that this rose has taken through the hands of her sweet, sweet son.

With Mother’s Day this Sunday, I imagine I’ll receive handmade cards from my children. I imagine they will scramble to put crayon or marker to paper in the 11th hour, amidst soccer games and strawberry picking and whatever else we get into this weekend. If past events are any indication, these cards may not look like much. But what I will remember are the conversations I’ve already begun to overhear between JP and Emily, as they plot what they intend to accomplish. Says my daughter: “I am going to make Mommy a book. A book about a princess and a tractor, the two things she likes the most” (not sure I’ve ever indicated a preference for either, but that’s besides the point). And I’ll remember what my son told me as I tucked him in last night: “You are the best Mommy in the whole universe. Even better than Alien Mommies or Robot Mommies.” I’ll take what I can get, because, with children, it really is the thought that counts.

Other Favorites About Children’s Generosity to Mom:
Mr. Rabbit and the Lovely Present, by Charlotte Zolotow & Maurice Sendak (Ages 3-6)
A Chair for My Mother, by Vera B. Williams (Ages 4-8)

You are currently reading The Story Behind the Gift (In Honor of Mother’s Day) at What to Read to Your Kids.