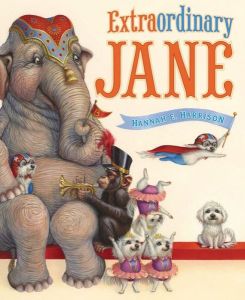 The lovely new picture book, ExtraOrdinary Jane (Ages 3-100), by first time author-illustrator Hannah E. Harrison, has me all fired up—but in a good way. Jane, a fluffy little white circus dog, “was ordinary, in a world that was extraordinary.” She isn’t “mighty” like her elephant-lifting father, or “graceful” like her ballerina mother. She isn’t “daring” enough to be shot out of a cannon like her six canine brothers. Try as she does to “find her special talent,” she encounters either mediocrity (her paintings lack “pizzazz”) or failure (her musical renditions send others running).

While the book may be set in a circus, its poignant, carefully worded message is clearly intended to transcend the Big Top. Recently, I’ve been thinking a lot about what it means to be ordinary in our increasingly supercharged, achievement-obsessed society. Bringing up kids today means confronting talent at seemingly every turn: the athlete that tears down the soccer field; the six year old who is already in her third year of violin; the kid who reads at three grade levels above her peers. It’s not enough for children to be good at something; they are expected to be the best. When I was growing up, it wasn’t until I was applying to college that I was asked to think about the concept of “expertise.” Today, the question is on preschool applications: “What special skills/talents does your child have?”

As parents, it can mess with our heads; even worse, it can bring out our own insecurities and prompt us to scrutinize everything our children do. We might lie in bed and wonder, will my child ever be the best at something? And what if he or she is not? More significantly, when will these thought patterns begin to rub off on them? If we continue to judge our children on the basis of outward achievement, when will the pressure become too much for them? When will they stop discovering for themselves and start performing for others?

In this light, words like “ordinary” and “average” have become almost taboo. Calling your child “ordinary” (horrors!) is like saying you don’t believe in him; that you don’t think he has anything unique to offer the world. But have we forgotten that “extraordinary,” by definition, can only exist by comparison to others? Because the thing is, I do believe that my children are ordinary. And I also believe that they, like all children, ordinary or extraordinary, have unlimited gifts to offer the world. My children are incredibly special to me and to the people who love them; we marvel at everything they say and do. But, if I’m being honest, they’re not any more or less extraordinary than most kids. In the short time that they’ve been alive, they don’t seem to have any particular talents that rise to the top and set them apart. My son’s interests lie all over the place, and they’re unpredictable from day to day. He is as generous as he is bossy, as much a leader as he is a follower. Sometimes he tries really hard at stuff, and sometimes he gives up quickly. He reads no better or worse than most six year olds. And watching him on the soccer field is akin to watching a tortoise (albeit a smiling one) sunning himself on a rock. When did all of that become not good enough?

I love that ordinariness gets a makeover in ExtraOrdinary Jane, where our protagonist is celebrated alongside her extraordinary peers. Every one of Jane’s initial attempts to emulate the talents around her is brought to life in stunning acrylic paintings: visual explosions of color, texture, and movement that are nothing short of extraordinary themselves—as if even the illustrations themselves are bent on showing up our little Jane. (With their rich polishing and almost old-fashioned sensibility, the circus animals recall Chris Van Dusen’s equally extraordinary The Circus Ship.) And yet, there is warmth and humor in every one of Harrison’s pictures, just as there is in the good-natured and undefeated Jane. Following a disastrous collision of animals, resulting from Jane’s loss of balance on a gigantic ball, comes a wordless, double-page spread showing all the animals lined up on a bench outside the hospital, each sporting various bandages, braces, and compresses. Jane sits slightly apart from the group, sporting an expression of bemusement, as if to say, “ah, shucks, guys, I guess that didn’t work out so well.”

If the mere presence of a little white dog bearing an uncanny resemblance to the dog her grandparents have wasn’t in itself enough to convince me that I had to have this book for my three year old, then it was the array of band-aids and slings that had me convinced. (Just the other day I was asked to tape a bandage of wrapping paper to a stuffed kangaroo’s leg.)

In the end, it is the exquisite illustrations that carry home the book’s powerful message. Across the final pages, the only text we are given is that “Jane…was just…Jane.” No further explanation is needed, save for pictures of the little dog enjoying an ice cream cone with a bear, helpfully polishing the cannons, and curling up inside the ringmaster’s arms. What we get is an opportunity to look at these pictures—of Jane being Jane—and embrace her for just that. Not for who we would like her to be. But for who she is. Sweet, hard-working, curious, kind. Happy. Ordinary. Loved.

Other Favorite Pictures Books About Celebrating Who You Are:
For Just One Day, by Laura Leuck & Marc Boutavant (Ages 2-4)
I Like Myself! by Karen Beaumont & David Catrow (Ages 3-8)
Leo the Late Bloomer, by Robert Kraus & Jose Aruego (Ages 4-8)

You are currently reading Embracing Ordinariness at What to Read to Your Kids.