The Year That Lies Ahead 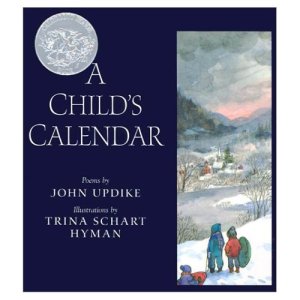 On the morning of January 1, my five year old crawled into our bed and asked with great solemnity, “Is the year of Christmas over?” I’m not entirely sure what he was getting at; did he mean to say month? or season? or was he actually inquiring as to whether the Year of the Great Christmas of 2012 had ended? I’ll never know exactly what was ruminating in his little head, but it was a sweet reminder of how bewildering the concept of time is to children—even to a five year old who has plenty of memories of past years.

We as adults take for granted our assurance about the cyclical nature of time: that all seasons, all holidays, all of nature’s dramatic transformations, will occur again and again with each passing year. It will probably come as no surprise that my instinctual reaction to JP’s question on New Year’s morning was to send him downstairs to fetch some relevant reading material. One of my all-time favorite children’s books (a book so precious to me that it actually resides on the “adult” shelves of our living room library) is A Child’s Calendar (Ages 5-10), a 1965 treasure of poems by John Updike that was later given a ’90s makeover with the addition of award-winning illustrations by Trina Schart Hyman.

Each month is vividly brought to life by a poem that evokes its unique sights, smells, and festivities, from the “fat snowy footsteps” by the door in January to the “live-long light” of June to the “popsicle stains” on the pavement in August to the “ghosts of smoke” that float through town in October. Updike’s poems are some of my favorites for children—lyrical but always accessible—and could easily stand on their own (April begins: “It’s spring! Farewell/ to chills and colds!/ The blushing, girlish/ World unfolds/ Each Flower, leaf,/ And blade of turf—/ Small love-notes sent/ From air to earth.”).

Add in Hyman’s watercolors, rich with the everyday bustle of children and their parents against a picturesque New England setting, and the poems suddenly jump off the page. One of Hyman’s greatest strengths as an illustrator is her ability to showcase a range of facial emotion. JP bursts out laughing at a mother’s expression of horror in “August,” as she glances across the beach at her stripped-down toddler, proudly standing before the ocean with his arms stretched out and his bare bottom exposed. My personal favorite is the look of skepticism on a different little boy’s face as he peers through his front door at the entourage of witches and pirates on the porch in “October.”

The dawn of a New Year can be a time of great planning and anticipation; and I relish the chance to turn the sorrow of another Christmas past into a chance for my children to dream about what exciting moments this next year has in store for them. Because A Child’s Calendar (and the other favorites below) begin with January, and because January tends to be when the upcoming year’s calendar is most on my mind, it tends to be in January that I remember to read these books. But it occurs to me that if I were more sensitive to the inquisitive minds of my little ones, I might read each month’s poem on the first day of that month, as a reminder of the fun that lies ahead and the opportunity to cherish all the little moments (in addition to the obvious biggies) that make our seasons so special.

Other Favorites About the Months in a Year and the Passage of Seasons:
Over and Over, by Charlotte Zolotow (Ages 4-7)
Red Sings from Treetops: A Year in Colors, by Joyce Sidman & Pamela Zagarenski (Ages 4-10)

§ 2 Responses to The Year That Lies Ahead

You are currently reading The Year That Lies Ahead at What to Read to Your Kids.