The Stories We Tell Ourselves

My aunt used to hold an annual Christmas Eve party at her apartment on the eighth floor of a building just two blocks from ours in New York City. It was a small group, rarely more than twelve, and we were the only relatives ever invited. We only saw these friends of my aunt once a year, but before the elevator reached the bottom floor at the end of the evening, I was already looking forward to next year’s gathering. My aunt had been the editor in chief of a major magazine, and her friends were artistic, eccentric, and alluringly mysterious.

There was one woman in particular whom I adored. Always the last to arrive, she would come through the door shrouded in a floor-length black fur coat. Her perfect coif of white hair was sharply angled at her chin, and she moved in a cloud of exotic perfume. Her raspy smokers’ voice was fond of the word “darling,” and she always addressed me as if I was an adult. Perched on the sofa sipping my ginger ale, I inched as close to her as I could, throwing back my head with laughter as she did.

She lived downtown where the artists were, and I knew little about how she spent her days, other than that she and her husband had never had children. What I wouldn’t give to go back in time and ask her any number of questions! As children, we’re content with the stories we tell ourselves, the ones we make up in her head, and I fashioned endless stories for this larger-than-life woman in black, who seemed to float effortlessly around my aunt’s apartment, captivated by everything and nothing at the same time.

Sophie Dahl’s marvelous picture book, Madame Badobedah (Ages 5-9), told in three chapters over 53 pages and amply accentuated with retro illustrations by Lauren O’Hara, stars a young protagonist spellbound by an eccentric stranger who shows up for an unlimited stay at her parents’ hotel by the sea. This stranger barely opens her mouth before Mabel has developed theories about the feathers draped around her neck, her stacks of weathered trunks, and her prized pet tortoise. But warm to her from the start Mabel does not. Resentful of the woman’s haughty demeanor, Mabel quickly convinces herself that, rather than a solitary woman healing from heartbreak, she’s a jewel thief on the run. What follows is a riotous narrative, ultimately giving way to a warm intergenerational friendship perched somewhere in the middle of fiction and reality.

The first thing I thought when I started reading Madame Badobedah to my daughter is how starved we’ve both been for fabulously funny first-person narrators—the likes of Dory Fantasmagory and Lulu—girls with wild imaginations, stubborn opinions, and matter-of-fact delivery. Girls who might be termed “a lot” by the adults in their lives, but who are a whole lot of fun to read about because they aren’t going to take slack from anybody. This shoeless, free-spirited girl has us wrapped around her finger before page three, while she describes the rugged seascape around her parents’ hotel—full of “old-men trees, battered and bent by the wind and sea”—as the perfect setting for her love of adventuring. 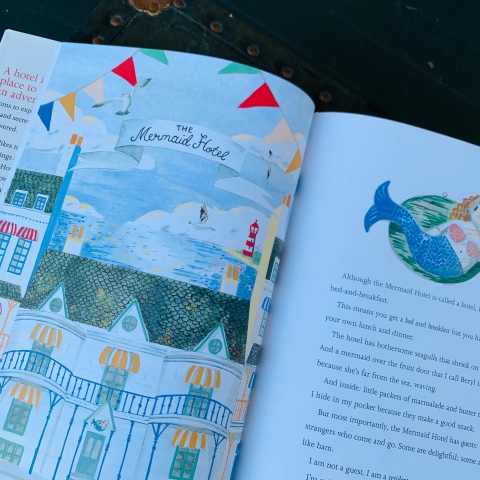 Mabel has been raised in the Mermaid Hotel, a grand, balcony-adorned white building with “bothersome seagulls that shriek on the sills” and “a mermaid over the front door that I call Beryl in Peril because she’s far from the sea, waving.” Like Kay Thompson’s Eloise (another precocious narrator for the ages), part of Madame Badobedah’s undeniable appeal stems from the fact that Mabel has free run of the hotel, where her father is manager but “my mom is the boss.” Mabel knows the ins and outs of every guest room, though she’s only permitted to explore them when they’re empty. When the stranger arrives, sporting fiery red hair, matching red lips, twenty-three bags, and five pets, Mabel is the first to see her because she’s hiding under the front desk. Her first reaction? “I thought she might be a little bit awful.”

Indeed, this stranger opens her mouth and confirms Mabel’s suspicion: “‘Darlink,’ she growled, ‘please remove yourself from under the desk and pass me my bag. The blue one there, to the right of that terrifically ugly coat stand. No, you frightful little child, not that one! Blue I said!’” Is it any wonder that, as Mabel begrudgingly passes this stranger her bag, its heft “like ten gold bars,” she begins to weave a story about this woman’s villainous past? After all, “I A-DORE that coat stand.”

Still, this stranger—whom Mabel begins calling Madame Badobedah (“rhymes with ooooh la la”)—inspires instant fascination. As Mabel and her parents heave Madame’s suitcases up the stairs, Madame herself—“her head poked out like an angry ostrich”—holds only a single pillow atop which balances her tortoise, “like a precious, scaly emerald.” She slips toffees into her mouth and sets to unpacking “a shopping list of strangeness,” including a tiara, a pair of worn ballet shoes, a single ice skate, a pack of cards, and a Hawaiian lei. Mabel knows all this because she’s camped outside Room 32 in spy gear (raincoat and sunglasses), peering at Madame through the key hole.

For days, Mabel studies Madame, making lists of the mounting evidence for her supervillain theory. Madame, for example, cringes when she hears a police siren. She never goes outside. She seems indifferent to other living beings, except her tortoise, “who was the most suspicious creature I’d ever seen,” with his beady eyes and his love of bananas. Madame covers her mangled toes in two layers of socks, and she throws around the word “darlink” like an “insult.” The trouble is: no one but Mabel is wise to this “high priestess of crime,” so no one but Mabel is going to stop her.

One day, Madame invites Mabel to tea in her room, and Mabel accepts, albeit “a teeny bit scared.” Immediately, Mabel discerns that the room feels different: it’s “bigger, cartoon-colored,” more “alive somehow.” 507 drawers comprise Madame’s dressing table, each of them dwarfed by a giant bottle of Shalimar perfume (coincidentally, the signature scent of my late grandmother). When Mabel asks about the contents of the drawers, she’s astounded at how offhandedly Madame replies that they are filled with “diamonds, coins from Cleopatra’s tomb, things like that.” Why, Madame is nothing short of a pirate! This time, though, Madame plays along, inviting Mabel onto her pirate-style bed—“I call it the Not-So-Jolly Roger”—and setting sail through stormy seas, Mabel at the helm.

Over time, more details emerge, however fuzzy, about Madame’s past. She was a princess. She was a star until she wasn’t. A cough rattles in her throat on damp days, when Mabel carries breakfast to her room. At times, Madame acts more like a child than a grown-up, and this intrigues Mabel more than anything. Over hot chocolate and cookies on her bed, Madame begins to tell Mabel some of her personal stories: about her passage over the ocean as a young girl during wartime; about the tiara she wore on stage for The Nutcracker; about the years she subsisted entirely on bread soup. She never talks down to Mabel, even as she’s instructing her to be leery of men offering to put a ring on her finger (“It’s verrrrrrrry important for a woman to be independent, Captain Mabel. This you should know!”). 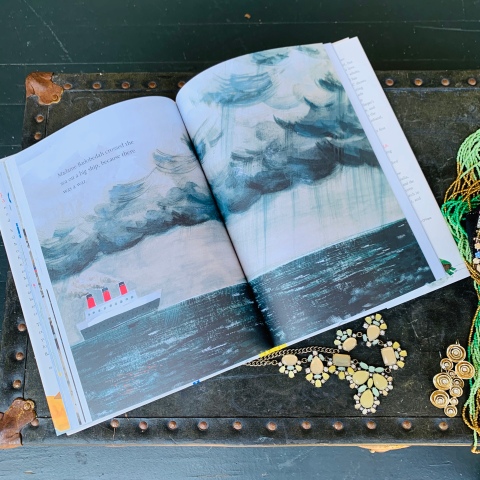 Eventually, Madame does the most surprising thing of all. She apologizes. She apologizes to Mabel for her unkind manner when they first met, for being “grumpy and foul” and saying “dreadful things.” I was afraid, she tells her, of starting over in a new place. Though she doesn’t doubt for one second that Madame is a mastermind of criminal activity, Mabel realizes that she likes her. Even more, Mabel trusts her. She trusts her enough to show her the secret passage of Room 32, something only a child who lives in a hotel would know about. “‘I’ll take you. No one knows how to get there but me,’ I whispered, taking her soft, gnarled hand.” 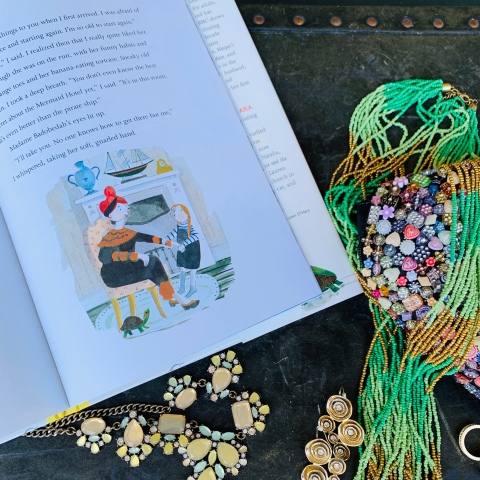 For the final few pages of the book, the two crawl on hands and knees through a panel in the wall, their cheeks stuffed with powdered sweets, until they reach a door upon which Mabel knocks three times. It isn’t called the Mermaid Hotel for nothing, we discover, as the two emerge into a secreted bay of glittering fins. When Mabel catches Madame grinning, “her teeth shining in the dark,” she realizes for the first time that the mysterious aura surrounding Madame is one of loneliness as much as exoticism.

Soon after, Madame gives Mabel a present. The origins of the gift immediately kindle flights of fancy in Mabel’s head, but at the same time, Mabel understands that what she treasures most about this eccentric stranger-turned-friend are the moments spent grounded in her presence, “her big green eyes with purple crinkles underneath.” You don’t necessarily need to imagine anything when something so exceptional exists right in front of your eyes.

Review copy by Walker Books, a division of Candlewick. All opinions are my own. Amazon.com affiliate links are used, although I prefer we all shop local and support our communities when we can.

§ 2 Responses to The Stories We Tell Ourselves

You are currently reading The Stories We Tell Ourselves at What to Read to Your Kids.