At Last, Something for the Youngest Sibling

One book that all the Book People will be talking about this holiday season is Abby Hanlon’s Dory Fantasmagory (Ages 5-9), an illustrated early-chapter book featuring one of the spunkiest, most imaginative, most genuinely real six-year-old girls to grace the pages of children’s literature. (After all, it was written by a former first-grade teacher.) If you really want to impress people with how in the know you are, you should buy the book this month, instead of waiting until next month, and then you should give it to everyone you know—regardless of whether it’s their birthday or not. Just a thought.

It’s possible that I’ve lost perspective on this 153-page gem, because I have, by request, read it upwards of ten times to my four year old in the past month (and don’t think that her seven-year-old brother doesn’t listen in at every chance he gets). I’m beginning to feel like Dory (nicknamed Rascal) and Emily are actually the same person (wait, are they?). Both talk to themselves incessantly, invent wild fantasies in their play, wear strange things around the house, and will stop at nothing to get the attention of their older siblings. I don’t think that Emily has a bearded fairy godmother named Mr. Nugget, or that she believes there are at least seven (mostly) hospitable monsters living in our house…but then again, I can’t be sure. What I do know is that Emily, like Dory, hears things like “Stop copying me!” and “Stop acting like such a baby!” far more than I would like. And that she, like Dory, uses her imagination and her heart to win everyone over in good time. 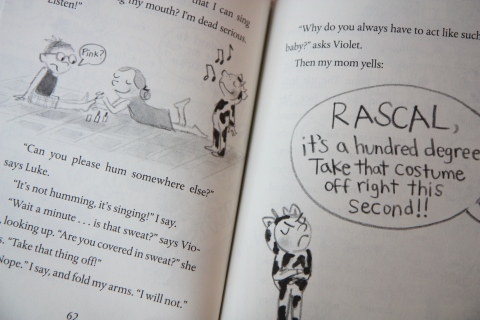 I am a huge fan of Judith Viorst’s comparable early-chapter series about the wildly precocious Lulu (which begins with Lulu and the Brontosaurus, and whose third installment Lulu’s Mysterious Mission is also on heavy rotation at our house these days). But Lulu, with her ear-splitting tantrums, her bossy rhymes, and her self-centeredness, is not exactly the kind of girl we would like to believe is living under our roof (of course, that’s Viorst’s point, and why kids find the books so hilarious).

Dory, however, is always likeable to her readers. Despite what her family may think of her at a given moment, we the readers are always championing her wit, hailing her resourcefulness, and rooting for her on every page. Even when her mother is tearing her hair out—because Dory won’t break character at her annual checkup and insists on barking in response to all the doctor’s questions—we are secretly smiling at that stubbornness, that scrappiness (because, ha ha, it’s not us!). She’s good, that Dory. You’ve got to hand it to her.

Undoubtedly, this short chapter book makes a highly entertaining read aloud for any four, five, and six year old; but it should also be said that, for a newly independent reader, this book moves along beautifully, is frequently broken up by exuberant childlike pencil sketches, and makes use of straightforward sentence structures (these things are rarer than you’d think in the world of early chapter books, which get very overwhelming very fast). In fact, I have this beautiful picture in my mind of Dory Fantasmagory being read by an older sibling to a younger sibling. The younger one would love it, because she’d be seeing herself on every page, and the older one might learn a thing or two about seeing the world through the eyes of The Youngest for a change. 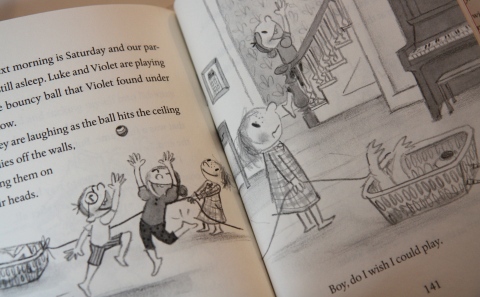 Thank you, Dory, for coming into our lives; for fighting the evil Mrs. Gobble Gracker (even if she didn’t exist in the first place); for entertaining yourself for hours on end; and for always giving one more chance to your brother and sister. Thank you, Dory. Children’s literature never knew how much it needed you.

§ One Response to At Last, Something for the Youngest Sibling

You are currently reading At Last, Something for the Youngest Sibling at What to Read to Your Kids.