It was the best of times, it was the worst of times…it was the sibling relationship during quarantine. My daughter spent last Saturday night at her aunt’s house, and while my husband and I enjoyed a peaceful night with our son, it dawned on me: it’s not my children who have been sucking up all the oxygen in our house, it’s their relationship.

I’m grateful my children have each other at a time when they have no one else. But because they have no one else, they’ve pinned all their hopes and dreams and frustrations and jealousies on one another. Everything they’ve always done is now executed with a new level of intensity. They tear into each other over the smallest offenses (“Stop whistling!” “Stop looking at me!” “I can’t sit hit here because your feet smell!”), only it escalates into poking and clawing and just-plain-mean yelling, like they haven’t done since they were much younger. If I separate them (“This house may be small, but there is enough room for you to spread out”), they’re back together again before I can get down the stairs. Only, suddenly, they’re curled up in a teeny tiny fort of their own design, a tangle of limbs impossible to tell where one stops and the other begins, giggling and scheming and reveling in the giant mess they’ve strewn across the upstairs.

Four whole hours before my daughter was scheduled to come home from her sleepover last weekend, my son was already watching for her from the window.

The only thing that could make this current state of affairs any more intense would be an elevator button. If there is one small consolation to not being able to go places right now, it’s that we can at least avoid the universal sibling fight over who gets to push the elevator button. There has never been a harmonious moment of siblinghood that wasn’t ruined by a gosh darn elevator button.

Lest we forget about life with elevator buttons, Minh Lê and Dan Santat have teamed up to create a comics-inspired picture book to remind us. And yet, Lift (Ages 4-8) isn’t about ordinary elevator buttons. Well, at first it is. But then that button becomes something magical. Something illuminating and insightful and spectacularly fun. Something which drives siblings apart—but then brings them back together, united in a common purpose. All without leaving the house. 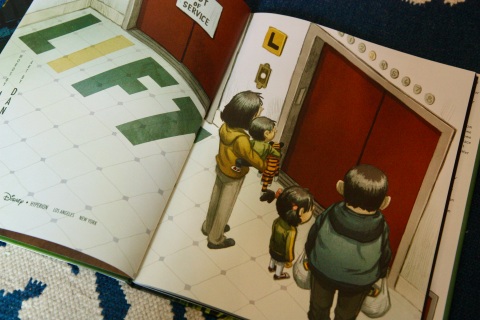 Iris loves to push the elevator buttons in the apartment building where she lives with her parents and younger brother. “When I’m feeling a bit down, there’s one thing that always cheers me up.” Breaking with traditional picture book format, Lift is Minh Lê and Dan Santat’s second picture book together (the first was this), and the beauty of their partnership lies in their seamless, cinematic blending of words and illustrations, of telling and showing. In this instance, we don’t need to be told why pushing elevator buttons cheers up our young protagonist, because the picture is worth a thousand words: Iris’ face, previously a scowl shadowed by her family, is now lit with the light of the button, her family no longer visible in the frame. It’s a private moment. It’s a powerful moment. It’s a look-what-I-can-make-happen moment.

It is not a moment to be shared.

Fortunately, because her brother is only a toddler in their father’s arms, the job of pushing elevator buttons falls exclusively to Iris. “I always get to push the button,” she tells us with pride. Iris may not notice, but a careful reader will spot that her little brother begins noticing the button, then stretching out his arm towards the button. Until, on Thursday, their father assists him in reaching the elevator button. Just as Iris is about to marvel at her predictable power of making that button light up like the Fourth of July, her brother’s finger swoops in and presses it for her.

If that betrayal wasn’t bad enough, her parents are delighted with their son’s new accomplishment. Hell hath no fury like a big sister watching her little brother being lavished with parental attention.

To make matters worse, it happens again. The next day! As the elevator door opens, Iris’ face lights up with the anticipation of lighting up the button—and then her brother once again reaches down from their father’s arms and pushes it himself. “BETRAYED AGAIN!” Iris’ face goes angry, jealous, smoldering green.

“Enough is enough. I know it’s wrong, but I can’t help myself. I push…” Well, if you don’t know what’s coming, you haven’t ridden enough elevators with scorned big siblings. Of course, she pushes every single button. Of course, her parents are made to suffer as the elevator doors ding to open at every single floor. Of course, it’s hilarious (just as long as it’s not us).

As Iris sulks in the lobby, waiting for her father to pull around the car, she notices that a repairman working on the second of the building’s elevators—which has been hung with an “out of order” sign since the book’s beginning—has tossed the wall mounting for an elevator button into the trash. A discarded elevator button, sticking up out of rubble! What’s a girl with a front-pocket hoodie to do?

When Iris gets home later that day, she takes refuge in her bedroom. “I just want to be alone. I wish I could be anywhere but here.” She unpacks the pocketed elevator button and tapes it next to her closet door. She sticks out her forefinger and presses the button, then with a satisfied smile turns to walk away. No one, neither Iris nor us, are prepared for the DING which follows, for the light which suddenly emanates from beneath her closet door, and for the vast jungle which appears when Iris opens that door. 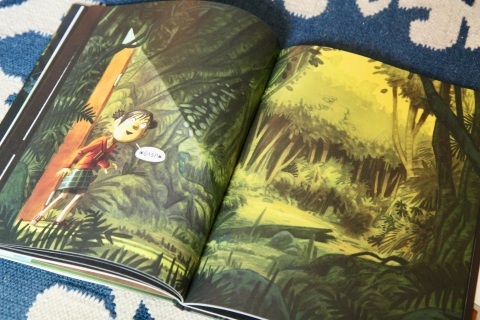 Iris’ jungle adventure, including roaring tigers, doesn’t last long, because the apartment’s (real) doorbell sounds and draws Iris back to her room and into the front hall, the only signs of what has just happened a stray leaf in her hair. (Careful readers will note the connection between the tiger in Iris’ adventure and the stuffed tiger carried by her brother throughout the story, the word “Iris” inscribed in black sharpie, reminding us that this is one more in a long line of things usurped by the family’s newest arrival.)

The doorbell signifies the arrival of a babysitter (“We’ll be back soon, sweeties. Love you!”). As Iris tries to hightail it back to her room, the babysitter has other plans (“I brought games!”), and Iris suffers a maddening evening of watching her brother throw food and scatter game pieces. She’s even forced to endure the indignity of kissing the stuffed tiger goodnight, as her brother holds it out to her.

Once the lights are out, Iris channels her anger into another adventure aboard the magical lift behind her closet door. This time, influenced by the board game she played earlier with the babysitter, the destination is Outer Space. Suited up in an astronaut’s gear, Iris floats inside and outside a massive space station, eyes wild with excitement, arms outstretched, no one around to compete with.

Once again, reality sounds, this time in the form of her brother’s wailing. Hell may have no fury like a scorned big sister, but no one runs (or floats) faster when one of her own is suffering. Iris hightails it through her room and into her brother’s, where the babysitter is trying in vain to settle him down. “I know exactly what you want,” she says, like the captain she is. And she proceeds to position her brother on her lap for story time. 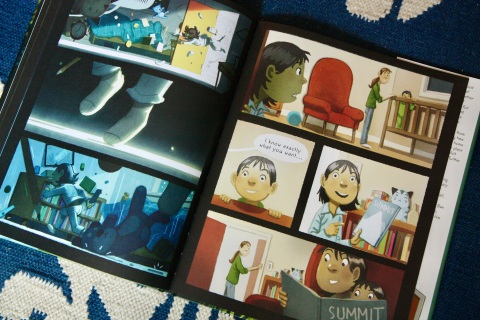 The next morning, the light flooding Iris’ room isn’t the only thing that’s changed. Something has shifted inside Iris. As she reaches out her forefinger for the button beside her closet door, she hesitates, turns around, and walks out of her room and into her brother’s. She lifts him from the crib and walks him back to her room. It’s not a coincidence that this is the first time we see him walk, because it’s the first time Iris recognizes him as a potential equal, a playmate, a fellow explorer. They stand hand in hand before the closet door—and then Iris lifts him to push the button.

“After all, everyone can use a lift sometimes,” she tells us. And what an adventure it turns out to be. (No spoilers.)

These may be unprecedented times of sibling strife, but they are also ripe for shared adventures. If we’re lucky, that’s what we’ll remember about watching our kids in quarantine. The held hands, the spooning bodies, the inside jokes, the screeches of glee, and the imaginative play—even (and especially) as it takes over the house.

Books published by Disney Hyperion. All opinions are my own. Amazon.com affiliate links, although I prefer we all shop local when we can, especially now!

You are currently reading Adventures in Siblinghood, Quarantine Edition at What to Read to Your Kids.