On my first day of tenth grade, which was also my first day at a new school 300 miles from home, I sat in the back row of an auditorium waiting for my mandatory “Approaches to History” class to begin. I sneaked peaks at my watch, in an effort to avoid making conversation with the students to my left and right, and because it was now several minutes past the scheduled start of class and there was no sign of a teacher.

The crowd began to quiet as the sound of yelling could be heard from the hallway. Two upperclassmen, a boy and girl, wandered into the front of the auditorium, in some kind of heated argument. As we watched, they began to shove one another, books flying, threats delivered; the girl began screaming for help. What kind of horror show have I chosen for my school? I wondered.

As quickly as it had begun, it ended. Even more aghast, I watched as the two students faced us, took a bow, and walked off. A teacher appeared and began distributing papers down the aisles. On each paper was a series of questions about what we had just witnessed. “Which party delivered the first blow?” “What was the exact sequence of events?” “What did he look like?” “What did she say?” We were also asked to rate the certainty of our answers.

If I had been shocked moments ago by the ruckus taking place thirty feet from me, I was even more shocked by my peers’ vastly different accounts of what had happened. This, of course, was the point of the exercise. There were wild discrepancies about what each subject had been wearing; there was even disagreement on race and accent. Almost no consensus could be reached on who had “started” the fight, who pushed whom first, or what the two were fighting about. And yet, the next day, when the teacher distributed the tabulated responses of our class, we learned that most people had rated their certainty above 70%.

The fallibility of historic reporting was something I had never stopped to considered. After this day, like one tends to do in adolescence, I began to question the truth of what I was seeing and hearing around me. I began to read history textbooks with the understanding that the way we transcribe our world is impossibly tangled up in the biases, prejudices, and preconceptions of both our individual past experiences and the cultures in which we live. As the saying goes, history is written by the winners.

But what happens when everyone loses? What can we discover about one another and ourselves? If we can’t tell what the world really looks like, where does that leave us?

These might be unusually weighty questions for a middle-grade novel to pose, but M.T. Anderson and Eugene Yelchin have done just that in The Assassination of Brangwain Spurge (Ages 11-15)—albeit so deftly, through such a fantastical setting, and with so much absurd comedy that many of their young readers might not realize they’ve just been schooled on the limitations, missed opportunities, and dangers that accompany bias. It’s an age-old problem and one as timely as ever.

I have not come across a contemporary work of children’s literature as wholly original as The Assassination of Brangwain Spurge. At its most basic level, it reads like an epic fantasy, set against a Middle Earth-esque backdrop and starring an elf and a goblin: two historical academics brought together on a (misconstrued) mission to mend thousands of years of distrust between their two warring nations. But the story’s multitude of riches extend well beyond the surface. (Put another way: I don’t particularly care for fantasy, yet I chose this as my favorite book of the year.) In fact, the levels at which one can experience this book are so varied, I will defer to Anderson and Yelchin’s own competing descriptions of their story, which appear in the interview-style Author’s Note describing their collaborative process.

MTA: So Eugene and I created this book as a tribute to all of those brave writer-explorers in the ancient world who voyaged into unknown lands and tried to understand the cultures they found there: Marco Polo, Herodotus, Ibn Battuta[…]

EY: What are you talking about? This is a spy thriller. Murder! Chases! Double crosses! We got a bomb in there!

MTA: But, Eugene, at its heart, it’s really a tragic meditation on how societies that have been trained to hate each other for generations can actually come to see eye to eye.

EY: A tragedy, my eye! A crazy story about two fools blinded by propaganda is not a tragedy. It’s a comedy.

MTA: Sure, Eugene, whatever. Basically, we just wondered why goblins get such a bad rap in fantasy noels like J.R.R. Tolkein’s Lord of the Rings.

In full disclosure, when I first started reading this 526-page tome—told through alternating chapters of traditional narration, letters, and wordless illustration (almost as if Brian Selznick’s books got a darker makeover from Hieronymous Bosch)—I thought, wowzers, this book is strange. Marvelously strange, but strange. I can think of maybe one or two children who would enjoy it. Then, with each chapter, I found myself thinking up more and more children (and adults) who I thought would love it. By the end, unable to decide if my husband or son should read it first, I just threw it at my husband and yelled, YOUR TURN TO READ TO OUR SON! (Upon further consideration, I actually think this book is best suited as an independent read. Although it does beg discussion and would be absolutely perfect in a book club setting.)

Have a kid who likes Tolkein, mythical creatures, or epic battle scenes? No-brainer. Have a kid who likes odd and eccentric? Yup, it’s here in spades. Have a visually-oriented child who would welcome interspersed chapters devoted entirely to mysterious, pen-and-ink illustrations, the likes of which they’ve never seen before?  Oh YES. Dry humor and political satire? It abounds. How about the kid who would appreciate holding in their hands an exquisite product of bookmaking, whose jacketless cover with its embossed letters and stamped gold ink feels like you’re laying hands on something maybe not entirely ancient but also not quite of the modern world?

What about a child who enjoys complex, flawed protagonists, capable of delighting and disappointing faster than one can turn the page? Herein lie two of the most memorable, if misguided, literary characters. Brangwain Spurge, a cantankerous elf historian largely preoccupied by his chance at fame, journeys to the land of the goblins on an unprecedented peace-making mission to return an ancient relic—a Faberge-type egg concealing a gemstone with ancient pictorial carvings—believed to have been captured long ago from the goblin king. (What Spurge doesn’t know is that he’s a pawn in a larger scheme by the elfin powers that be: the egg actually contains a bomb intended to obliterate the goblin king and his government.) Werfel, naïve and obsequious, is a historic archivist and the goblin entrusted with hosting Spurge. His job is to introduce the fellow scholar to the finer points of his beloved goblin culture and (he hopes) learn about elfin ways in return, resulting in famed publications of his own.

Whatever your reason for gifting this story to a particular child, the real gift will be in what is carefully and calculatedly revealed through its telling. Ironically, in a story about two individuals who come together out of a passion for historical accounting, both are equally blind to the cultural experiences of the other. Spurge is blinded by elfin propaganda, which has long painted goblins as violent, grotesque, and barbaric; as creatures who spurn cultural refinement for beheadings and relish living in squalor and poverty. The “skins” Spurge discovers hanging in Werfel’s house only confirm his bias; he never even registers the pride and joy in Werfel’s explanation of the goblin practice of shedding skins in celebration of achieving personal growth.

Werfel initially seems like the more open-minded of the two, but we come to realize that his failure to register offense at Spurge’s derogatory remarks stems from his blind commitment to ambition and hospitality. (“Goblins had a strong code of hospitality. Once a goblin invited someone across the threshold into their home, it was their duty to serve and protect their guest, no matter what. Hospitality was holy.”) We watch, helpless, as the two speak to one another without either being heard. 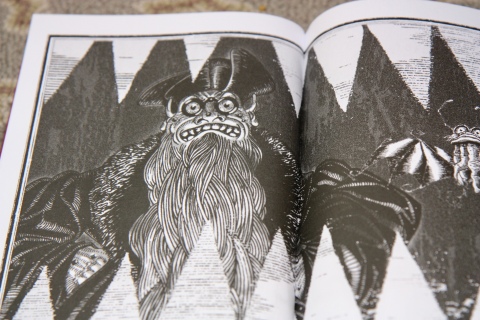 We may be helpless observers of the mounting tensions between Spurge and Werfel, of their failed attempts to penetrate the cultural bias both parties have brought to the table, but we’re also not entirely innocent. Anderson and Yelchin intentionally prey upon our own inherent bias as readers—specifically, our easy trust in visual truth. It turns out there’s an underlying tension between the story’s narration and its pictures. All the narration (apart from the letters) is done in third-person, although from Werfel’s perspective, so it’s easy to spot subjectivity. The visual chapters, on the other hand, are billed as “top secret transmissions,” literal thought pictures which Spurge records over the course of the day and then sends back to elfin headquarters at night, while suspended off his bed in a kind of trance. We automatically accept these visuals—in many cases, our only window into the story’s action sequences—as truth, simply because children’s literature rarely, if ever, tells us otherwise. If Werfel is illustrated as a towering, formidable figure with a scowling mouth and claws for hands—well, we assume that’s what he looks like, even if it doesn’t match the soft, gentle words that come from his mouth. 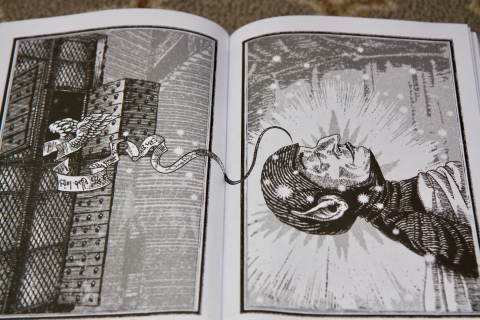 Until we don’t. At some point, we become aware that the words and pictures are at war with one another. That our eyes are deceiving us. Spurge’s visual reporting is flawed because, in many respects, he has made up his mind about what he sees before he even sees it. The truth—if we can ever get to such a thing—likely likes somewhere in the middle.

Only in Spurge and Werfel’s eventual shared exile do the two men begin to forge a touching, eccentric, friendship, one which moves beyond personal and cultural bias. Only in the climactic collapse of the two kingdoms do we trust that Werfel’s words and Spurge’s images are approximating something closer to the truth. Werfel begins to insult Spurge—the sincerest form of goblin affection, it turns out—and Spurge begins to see that his fellow historian is a lot more similar to him than he initially thought (at least, similarly sized).

Don’t just gift The Assassination of Brangwain Spurge because it’s wildly entertaining and wholly original. Gift it because it just might change the way a child experiences the world. If we approach new cultures with an open heart and an open mind, we might still not see the world exactly as it is, but we may find two things infinitely more valuable: compassion and connection.

Did you enjoy this post? Make sure you don’t miss any others! Enter your email on the right hand side of my homepage, and you’ll be guaranteed to receive a new post in your inbox 2-4 times a month. Plus, follow me on Facebook (What To Read To Your Kids) and Twitter (@thebookmommy), where I regularly post articles and updates on what my kids are reading to themselves.

Review copy by Candlewick Press. All opinions are my own. Amazon.com affiliate links support my book-buying habit and contribute to my being able to share more great books with you–although I prefer that we all shop local when we can!

§ One Response to Gift Guide 2018: Favorite Chapter Book of the Year

You are currently reading Gift Guide 2018: Favorite Chapter Book of the Year at What to Read to Your Kids.