It is often with trepidation that I watch my daughter prepare to work on a picture or a card. She sets out her paper, her drawing instrument of choice, and animatedly explains her Vision to anyone in the vicinity. “I’m going to draw a bird for my teacher,” she says, “because she loves birds.” I smile, but I try not to look too eager…or too stressed…or too anything. I try to look neutral. I attempt to recede into the kitchen—or, better yet, disappear into the basement to throw in a load of laundry—because I know from experience what likely lies ahead.

There are several minutes of happy humming, her preferred background music while she works. Followed by a sudden, guttural, downright masculine “UHHHHHGGGGGGHHHHHHH!” Followed by the sounds of said drawing instrument being thrown across the room. Followed by great, gasping sobs. “It doesn’t look like a bird at all! Its beak is terrible! It’s THE WORST BEAK IN THE WORLD! I hate this bird! I hate it!” Followed by the sound of paper crumpling, fists slamming, and stomping feet coming to find me. “Why did you tell me to make a bird? Don’t you know I am the WORST DRAWER OF BIRDS?!” (Ummm, I never said…)

My six and a half year old is rarely ruffled. She goes with the flow, handles curve balls with ease, and loves trying new things.

But she cannot handle mistakes. Mistakes are her Sworn Enemy. Never mind that they often derive from some subjective and unrealistic notion of perfectionism. They feel paralyzing to her. They are a giant Road Block which she cannot see past.

Because I read the Internet, I know it is my job to help my daughter embrace mistakes. Mistakes mean you are learning! Mistakes mean you are taking chances! Mommy and Daddy make mistakes all the time! So I’m supposed to say. And I do say. And her teachers say. And even her brother says. But anyone can see Emily doesn’t buy these platitudes. Not for a second. Because she doesn’t know the answer to the question she’s too afraid to ask: What do I do when I make a mistake?

And then debut author-illustrator Corinna Luyken’s exquisite The Book of Mistakes (Ages 5-99) came into our lives. I cannot stress enough the poetic power of this book. Just two pages in, and I knew—I knew deep down in that primal mothering part of my being—that this was the answer my Emily had been waiting for. An answer that’s light on the telling, heavy on the showing, and even bigger on the interacting.

“Picture books are a primer for how to be a human.” So was the powerful opening statement of a panel which I recently attended at the formidable Politics & Prose bookshop in Washington DC. Among the diverse children’s authors and illustrators gathered to discuss the theme of “journeys” in their picture books was Corinna Luyken herself. Luyken followed up this intro to say that, in conceiving The Book of Mistakes, she wanted to encourage children to find their own voice, to stop caring so much about what others want them to be. “The biggest mistake we can make is trying to be anything other than ourselves,” she said.

If picture books are to teach us how to be a human, including how to discover and embrace our unique way of doing things, then they must show us that mistakes are a natural part of this process. Even better, that the messiest, ill-conceived mistakes can sometimes be transformed into the most surprising, heartening rewards. (Could the “incorrectness” of a bird’s beak on paper be the beginning of something beautifully unusual?)

What The Book of Mistakes does so convincingly is to demonstrate that mistakes need not always be the endings they appear to be. Rather, mistakes can be beginnings. They can be springboards. The world doesn’t have to grind to a halt, the pages don’t have to be torn up, each time we make a mistake. If we open ourselves to the possibility of re-imagining, mistakes might take us to places even better than where we thought we were heading.

Luyken’s book begins and ends with a tremendous amount of white space and very sparse text, a combination which begs the child reader to pay close attention to the black line drawings which build exquisitely from page to page. (Luyken explained during the panel that her art is inspired by the greats of Gorey, Lear, and Sendak.)

Opposite the story’s opening words, “It started,” is a partial line drawing of a face—much like a child herself would do. In this face, only one eye has so far been drawn. Turning the page reveals the second half of the sentence, “with one mistake,” as it does the addition of a second eye. What is the mistake? It didn’t take long for my children to point out that the second eye has been dawn larger than the first. 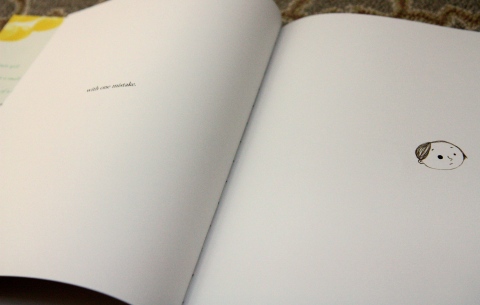 On the next page, things get more problematic, as often is the case when we try a hasty correction. “Making the other eye even bigger was another mistake.” The artist has presumably tried to match the size of the first eye to the second eye and ended up with two eyes even more grossly asymmetrical. My children were by now totally captivated: their adamant sense of symmetry making them as uncomfortable with the distorted eyes as the off-page artist herself appears to be.

When we turn the page a third time, we begin to witness the magic which happens when an artist takes back creative control. “But the glasses—they were a good idea.” The artist has added a pair of wide-rimmed, seafoam-colored glasses around the eyes, intentionally detracting from their oddness. 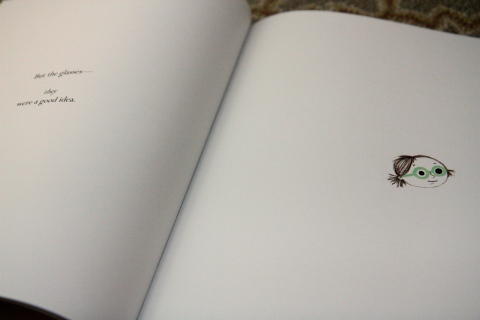 With each turn of the page, new mistakes give way to new ideas. An extra-long neck and anatomically-challenged elbows are obscured with an Elizabethean-style collar some elbow patches. The awkward space between the girl’s feet and the ground suddenly makes sense with the addition of roller skates. Ink smears become feathers. Stray pencil marks become strings for brilliant yellow balloons, which our roller skater suddenly holds up with great purpose. Bit by bit, a story line begins to unfold. 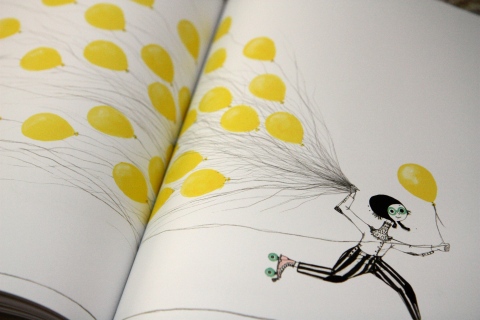 New characters emerge. My children’s favorite is a girl with one leg (mistakenly) drawn longer than the other. No cause for alarm. Perhaps this girl is born to climb trees, our narrator imagines. (“An extra-long leg would be a really helpful thing for climbing trees,” my daughter said. “Or maybe her leg only stretches when she climbs trees—like a kind of super power?” my son offered. They have totally drunk the Koolaid by now.) 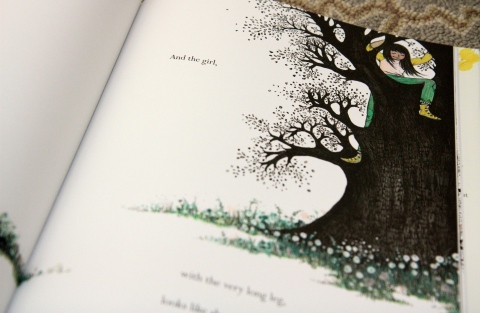 Luyken plays with perspective from page to page, as if teasing us readers to guess at what the cumulative result will be. What happens when all of the artist’s mistakes come together in a single scene? It turns out there’s no predicting the magical realism which transpires—this, of course, is the whole point—and the climactic, nearly wordless spreads mean we can gaze for hours and still devise new interpretations. 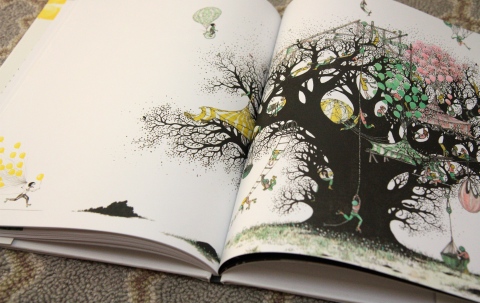 Then there’s the ending, dramatically paced across three pages, as much a metaphor as it is a literal question. “Do you see/ how with each mistake/ she is becoming?” the book asks about our roller-skating, balloon-beckoning girl, who races to join a celebratory gathering of other imperfect beings under the canopy of a large tree. And, of course, I broke out in tears, because truer words have never been spoken about my own daughter. About all of our children. About all of us.

Thank you, Corinna Luyken, for giving me a new way to talk to my children about this crazy, messy, beautiful thing called life—and their uniquely crazy, mess, beautiful “becoming” in the midst of it?

Book published by Dial Books for Young Readers/Penguin Young Readers Group. All opinions are my own. Amazon.com affiliate links support my book-buying habit and contribute to my being able to share more great books with you–although I prefer that we all shop local when we can!

You are currently reading Re-Imagining Mistakes at What to Read to Your Kids.