Putting One Book in Front of the Other

My children have heard a lot about the Supreme Court in recent weeks—mostly delivered via their parents and mostly accompanied by outcries of frustration and despair. Still, as much as I want them to understand my concerns with what today’s political actions reveal about the values of our leadership, I also don’t want my discourse to taint (at least, not permanently) the way they view our government’s enduring institutions.

In short, our family needed a pick-me-up. I needed both to remind myself and to teach my children about the Supreme Court Justices who, right now, are fighting for fairness under the law—and who arrived there with poise, valor, humanity, and moral clarity.

In this week’s op-ed in the New York Times, the founder of Girls Who Code, Reshma Saujani, cites recent statistics in which young girls are outnumbering boys in political participation and activism. Under the (awesome) title “Maybe Girls Will Save Us,” Saujani makes a case that this growing political interest in young girls may be related to the “plentiful, visible, diverse role models” that they are witnessing rising up around them (a record number of women are set to run for the House of Representatives this year, for instance).

One of these inspiring role models could easily be Sonia Sotomayor—our first Latina Supreme Court Justice—who speaks to her own journey to the Supreme Court in her new picture book, Turning Pages: My Life Story (Ages 7-10), illustrated by Lulu Delacre. (Another obvious choice would be Ruth Bader Ginsburg, but our family has read Deborah Levy and Kathleen Krull’s picture book biographies of RBG so many times, we needed a fresh story to pull us out of our slump.) I knew little about Sotomayor’s story before reading this book; when I finished it, I realized that her path in so many ways personifies the American Dream.

While Turning Pages reveals biographic details about Sotomayor’s life—including her Puerto Rican ancestry, her upbringing in the Bronx, her struggle with diabetes, her studies at Princeton, and her pursuit of the law—it never reads like a traditional picture book biography. In fact, I don’t think my eight year old, normally reticent toward biographies, even realized I was reading her one. With an intimacy that feels marvelously accessible to her young readers, Sotomayor talks about her life, not as a list of struggles and accomplishments, but as it was continually and diversely influenced by the many books she devoured as a child and young adult.

More than simply a story of her life, Turning Pages is an ode to the written word, a love letter to the guiding power of reading in Sotomayor’s life. Each spread in the book, each path on which Sotomayor embarked, celebrates a different way in which what she read inspired her thoughtful and driven approach.

Sotomayor’s language is as invitingly poetic as the written words that first flavor her childhood. Even before Sotomayor learned to read, she experienced the poems her Abuelita would recite during family parties, poems which “sent a charge through the room and sparked memories of her faraway island home.” Here, Sotomayor tells us, she began to understand that writing could be “electrical currents that jolted feelings to life.”

Diagnosed at seven with diabetes, Sotomayor developed the courage to administer herself daily shots with the help of her beloved comic books, casting herself alongside favorite action heroes. “Books, it seemed, were magic potions that could fuel me with the bravery of superheroes.” (It goes without saying that this page was a bit hit with my kids.) 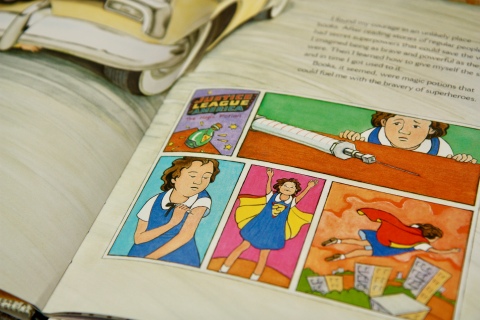 Books kept Sotomayor company on trips back to Puerto Rico, where she began to embrace her heritage, and they also helped her “escape” the sadness left behind by her father’s death, when she was just nine years old. Both my children were captivated by Delacre’s extraordinary art here, which juxtaposes the long, black-streaked faces of Sotomayor’s mourning family (“That really does look like sadness,” my son said) with Sotomayor’s bright escape down the library halls in a newspaper boat bearing herself and a library card. The library quite literally becomes a safe harbor.

Sotomayor devoured non-fiction and fiction alike, both serving to broaden her world view. She cites a particularly memorable day as one when a deliveryman dropped off a full set of encyclopedias, purchased for her and her brother by their mother. “I felt like a deep-sea diver exploring mysterious depths. Books were my snorkel and flippers, helping me get there.” Fiction, too, encouraged this desire to unearth every stone. I admit to a special fondness for the spread in which Sotomayor steals down the stairs like her favorite literary detective, Nancy Drew.

As Sotomayor grew, she also began to use reading as a way to uncover the less tangible “truths about the world around me.” She credits Lord of the Flies with the first time she understood the purpose of laws—and the danger of lawlessness. She also references the Bible at her Catholic high school, which cautioned that we “shouldn’t be so quick to judge people who do the wrong things.” Finally, she sings the importance of reading to develop empathy for different struggles and ways of living. She would choose texts stretching from the “farthest reaches of the planet” to “the little island closest to my heart: Puerto Rico.”

If books began to steer her moral compass and help her understand the individual’s place within a larger community, they also helped her persevere. While nothing about Princeton University matched her childhood in the Bronx, she studied relentlessly to “catch up,” even pouring over grammar books to hone her writing skills. (It was fun to tell my kids that I similarly spent many hours writing my thesis in a cubicle underneath Firestone Library, though I was also then forced to admit to myself that I have far less to show for it than Sotomayor.)

The final pages are devoted to law books—what Sotomayor calls, the “maps to guide us to justice”—which she, as a young lawyer, regularly referenced when convincing a judge of right and wrong, and as a judge, sourced to ensure fair treatment of all people. Now, as an Associate Justice of the Supreme Court, she turns her attention to “the founding document of our government, the Constitution of the United States.”  Of course, in crafting her decisions and opinions, Sotomayor has made her own lasting contribution to the written word. 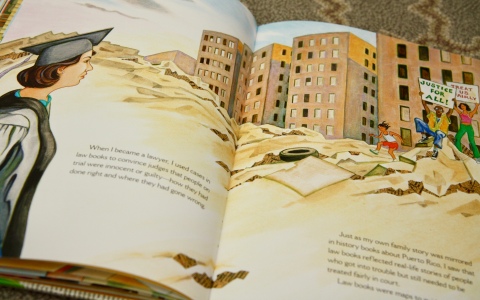 Sotomayor’s life undoubtedly comes through as impressive, but her telling also radiates humility. The numerous real-life snapshots, which grace the book’s front and back endpapers, make her feel even more approachable. To our children—our own inquisitive, voracious readers—Sotomayor’s path feels not only aspirational, but attainable. Like putting one foot in front of the other, she puts one book in front of the other.

Books are there when we need them, they deepen our world view, and they just might be the catalyst for our young readers to follow in the footsteps of other women change makers in this country’s leadership.

Review copy from Penguin Young Readers. All opinions are my own. Amazon.com affiliate links support my book-buying habit and contribute to my being able to share more great books with you–although I prefer that we all shop local when we can!

§ 2 Responses to Putting One Book in Front of the Other

You are currently reading Putting One Book in Front of the Other at What to Read to Your Kids.