The Surprising Backstory Behind The Monopoly (Wo)man

September 27, 2018 Comments Off on The Surprising Backstory Behind The Monopoly (Wo)man 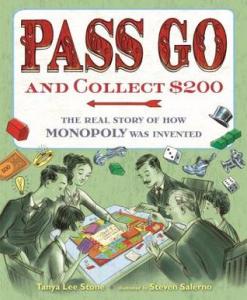 Children are never fools when it comes to laying claim to our attention. They know exactly what they’re doing when they pull out a wordless book for us to “read,” quickly sabotaging our hope of a quick bedtime. Similarly, when our children walk into the room with Monopoly under their arms, they know they’ve turned our innocent consent to a family game into a lost Sunday afternoon. Show me a child who loves Monopoly, and I’ll argue that the appeal is more than the sum of dealing money, lining up those little green houses, and the rush of saying to one’s parents, “You owe me $2000!” (that’s Boardwalk, with a hotel). Because I was once a child, who enjoyed nothing more than racing my dad to see who could lay claim to Boardwalk and Park Place, I know that the Very Best Part of Playing Monopoly is that it takes for-freakin’-ever.

The story of how Monopoly came to be may not be as long-winded as the game itself, but it did span decades. When author Tanya Lee Stone was assigned by her editor to write a book about “how Charles Darrow, an unemployed salesman during the Great Depression, went on to become a millionaire by inventing Monopoly” she was slightly disappointed. After all, her sweet spot is writing picture book biographies of historic women who pushed boundaries (ones we’ve loved as a family include Elizabeth Leads the Way: Elizabeth Cady Stanton and the Right to Vote, Who Says Women Can’t be Doctors? The Story of Elizabeth Blackwell, and Who Says Women Can’t Be Computer Programmers? The Story of Ada Lovelace).

Imagine Stone’s delight—and our surprise—when her research into the backstory of Monopoly revealed that it was not, in fact, Charles Darrow who came up with the game in the first place. It was a woman named Lizzie Magie. She even filed a patent for her invention. Twice.

Say what?! A woman invented and patented the game, but a man reaped millions for it? (If your children are shocked by this turn of events, there may be hope for us yet.)

In Pass Go and Collect $200: The Real Story of How Monopoly Was Invented (Ages 7-12), Stone unearths the fascinating details behind the creation and branding of a game that children (and adults) have been enthusiastically (or reluctantly) playing since the late 1800s. Stone’s conversational tone engages from the start—“What kind of Monopoly player are YOU?…Do you buy up all the properties you can? Do you always want to be the banker?”—before she commences with her history lesson. Similarly, illustrator Steven Salerno does such a bang-up job of drawing in the same oversized, cartoonish style as the game box itself—including weaving in familiar elements like the Monopoly man and the black steam engine—that I’ll be damned if my kids, upon finishing the book, didn’t immediately drag out our own dog-eared box and begin to set up the game. (Consider yourself warned.) 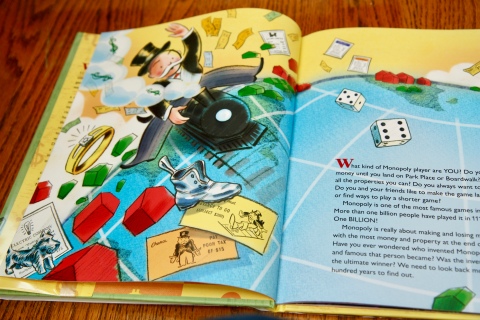 Lizzie Magie (1866-1948) was a clever, comedic woman with a penchant for activism. Specifically, she was concerned with the intersection of wealth and poverty in the late 1800s, when greedy landowners continually escalated the rents of their city tenants simply because of the monopoly they held on the land they owned. The resulting situation—“in which the landlords could become wealthier while renters, or tenants, stayed poor”—was one Lizzie decided to expose with the design of a game she patented and titled the Landlord’s Game in 1903. 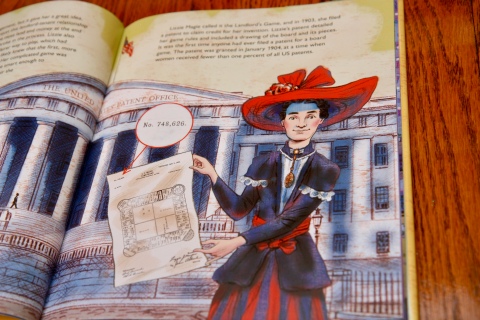 Half the fun of this book for my kids was tracing the evolution of the game that eventually became known as Monopoly, beginning with identifying similarities in Lizzie’s initial design. In fact, there is lots about the early game that will sound familiar to our kids, including a square board, two different kinds of cards to draw, twenty-two properties with purchase prices and rent values, a “Go to Jail” corner square, and four railroads. 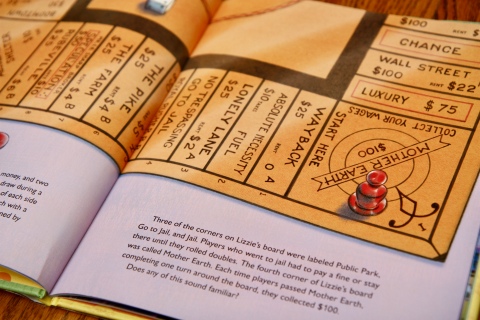 Over the next six years, not only did Lizzie make various revisions to her game, but the people to whom she handmade and distributed the game added their own ideas—including the students in a business class at the University of Pennsylvania, who were responsible for changing the name to Monopoly. In 1909, Lizzie attempted to sell an updated design to the Parker Brothers game company. The Brothers turned it down, on the basis of it being “too challenging and educational” (there’s a thought for ya). Still, Lizzie grew more determined, updating her patent in 1924 with a design that included creating houses and hotels for players to purchase for their properties.

The popularity of the game continued to spread, as did people wanting to put their own enduring stamp on the design. A Quaker teacher in 1930, for example, renamed the properties after different streets and neighborhoods in Atlantic City, New Jersey. (Funnily enough, on a road trip through New Jersey about a month before we discovered this book, my son read out this fact from his trusty Atlas.) Eventually, the game piqued the interest of Charles Darrow, a salesman down on his luck during the Great Depression. After a dinner guest showed it to him, Darrow became so enamored with the game that he decided to clean up the design—including adding some of the iconic visual elements we recognize today—and to craft a number of stenciled boards to sell to friends. 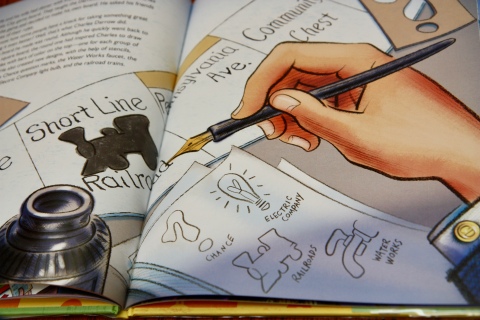 Darrow soon approached Parker Brothers and convinced them to purchase Monopoly. Before the deal was finalized, however, Lizzie Magie’s patent was discovered, and George Parker found himself on her doorstep, begging to her to release the patent to him for a mere $500. Lizzie agreed, content to have her game reach a mass audience, although perhaps unaware that her initial agenda—to reveal the disparity of wealth when one person assumes sole control of a property—was in the end her personal demise. Charles Darrow went on to make a million dollars from the sale; the Parker Brothers even more. Today, Darrow is still credited on the box itself with the game’s invention.

Before the book concludes with a wealth of back matter, including updates on more recent changes to the game—Did you know that in 2017, thanks to a Facebook survey, the boot, thimble, and wheelbarrow pieces were replaced by a penguin, rubber ducky, and T.Rex?!—author Stone encourages her reader to discuss and debate the fairness of Monopoly’s sale. Did the right person get the money? Who ultimately deserves the credit for Monopoly’s success?

Playing Monopoly may be an education in landowning, renting, and taxation, but its origin story is an even more complicated lesson in business—particularly, in the gender politics that have long informed business in this country. My kids will inevitably con me into playing this game for hours and hours, but I intend not to let them forget its fascinating backstory with a feminist twist.

Book published by Henry Holt and Company. All opinions are my own. Amazon.com affiliate links support my book-buying habit and contribute to my being able to share more great books with you–although I prefer that we all shop local when we can!

You are currently reading The Surprising Backstory Behind The Monopoly (Wo)man at What to Read to Your Kids.