Earlier this year, the third title came out in the now wildly popular series, “The Princess in Black,” written by Shannon and Dean Hale and illustrated by LeUyen Pham (the first is here, the second is here). The newest installment, The Princess in Black and the Hungry Bunny Horde (Ages 4-7), features all the characters we’ve come to adore, plus a fleet of purple bunnies every bit as deadly in behavior as they are gentle on the eyes (even the PIB is initially fooled by their “language of Cuteness”).

What continues to make this series so much fun isn’t just the “princess pounces” and “scepter spanks” (although I do love me some alliterative fighting), but the tantalizing way in which the story lines turn traditional princess lore on its head. Princess Magnolia might be upholding the pretty in pink image back home at the castle, but outside where there are monsters threatening innocent goats and goat herds, she and her unicorn-turned-black-stallion are 100% kick-butt.

There’s just one problem. While Team Hale is working on cranking out these titles—originally developed to fill a void in the early chapter book market—our kids are getting older. I’m not suggesting that we as parents need to replace the PIB (never!); I’m merely announcing that if your child (my son would like me to point out that these books are not “just for girls”) is ready for meatier stuff, there’s a longer, more sophisticated series waiting in the wings. A series every bit as charming. Every bit as deliciously unsubtle with its feminist message. But also one that trades some of the full-color cuteness for a hefty dose of caustic wit.

Princess in Black, meet Harriet Hamsterbone: the clever, fearless, fractions-obsessed, never-take-no-for-an-answer star of Ursula Vernon’s “Hamster Princess” series (of which the second was just released, and the third will follow this October). When she’s not fighting cat-ogres or diving off cliffs, Harriet is working on breaking curses placed by wicked witches (or fairy god mice)—curses which her male contemporaries, ahem, have not been able to crack.

Yes, this is a rodent whom we can all get behind. A gal breaking down traditional barriers and exploding gender stereotypes wherever she rides (on the back of her trusty quail, Mumphrey).

I need to come clean about something before we go any further. The “Hamster Princess” series (Ages 7-10, younger if reading aloud) follows in the wake of Ursula Vernon’s popular “Dragonbreath” series, which shares with it the same novel-that’s-heavy-on-graphics format frequently marketed towards “reluctant readers.” I’m not sure whether it’s this marketing, or the prolific speech bubbles and blunt-tipped monochromatic illustrations, but I have always lumped “Dragonbreath” in the category of Literary Dribble. Without so much as reading a word. I know, this is terrible. I have secretly rolled my eyes at kids reading the “Dragonbreath” books, and the only reason I decided to pick up the first “Hamster Princess” title was because I had heard rumblings about its blatant feminism—and the world can always use more of that.

SHAME ON ME. Because Ursula Vernon’s writing is smart, sharp, and sarcastic. Not to mention wildly absurd in ALL THE BEST WAYS. I loved every minute of my reading Harriet the Invincible and Of Mice and Magic to my five and eight year old. We blew past bedtimes because we were laughing ourselves silly (sometimes I was laughing alone, as there’s no shortage of humor geared towards the older reader). After we finished, I immediately went out and bought Dragonbreath for my son to read on his own.

Because the “Hamster Princess” series is aimed at an older audience and can take on more complex plots than the PIB stories, it’s not just the princess persona that gets exploited—although Harriet was once grounded for a month after shoving a book into the mouth of her deportment teacher, who was attempting to improve her posture by having her walk in circles with said book on her head.

The “Hamster Princess” books also twist around fairy tales themselves (proving, once again, that the best reason to read the original fairy tales is so that we can appreciate the fractured versions!). In Harriet the Invincible, Harriet is supposed to be the victim of the Sleeping Beauty curse, only she knocks the evil sorceress into the poisoned spindle (well, hamster wheel) and inadvertently unleashes eternal sleep onto everyone in the castle except herself. (“Oh, Man…Dad is gonna kill me.”) Forced to embark on a quest to find a prince who can bestow some cure-all kisses on the slumbering victims, Harriet ends up finding one that needs rescuing of his own—from a five-headed hydra and an impoverished kingdom.

The second book, Of Mice and Magic, takes on The Brothers Grimm’s The Twelve Dancing Princesses, only here the twelve princesses are mice, each named after a different month of the year by their OCD father (who, I might add, has also color coded his entire castle). Harriet, never one to resist an adventure, is called to the scene to succeed where for seven years the more obvious (male) contenders have failed. The mouse princesses are under a curse which has them mysteriously escaping the locked castle every night and dancing their way through the soles of their silk shoes. Unlike the princesses in the original story, these mouse princesses are not dancing of their own accord (that all girls should be expected to love dancing is pure “tyranny,” according to Harriet). Nor are the tuxedo-clad moles, the princesses’ dance partners, keen on this forced matchmaking: they’re only doing the bidding of their witch mother and hoping to get out of doing dishes. Are you keeping up? Because this, my friends, is only the beginning of the mayhem. 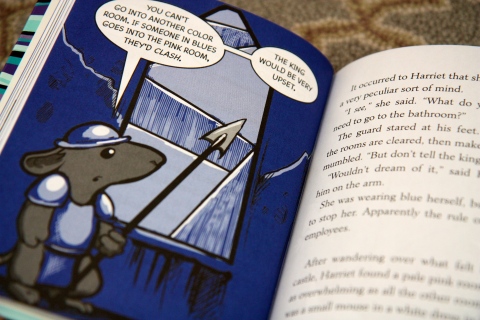 For a princess, Harriet is—as one crone admirably calls her—“a singularly bloody-minded little thug.” Still, swords and threats, spells of invincibility and a Poncho of Invisibility, can get you only so far. In all her adventures, Harriet’s greatest triumphs come, not from her physical prowess, but from her intellect, her compassion, and sometimes even her patience. Time and again, to avoid certain peril (or, at the very least, gender type casting), she is forced to think on her feet—and what she comes up with is consistent: the best way to beat the nay-sayers is to beat them at their own game. This hamster never misses a beat. She finds a way to turn every insult, every promise, every opportunity to her advantage.

Tonight, as I was putting the kids to bed, the subject of this blog post came up. “You know, Mommy,” my eight year old son began, “if someone forced me into a conversation about princesses, I would have to say that Harriet Hamsterbone is my favorite.” (He has learned to run the other way screaming when his sister and her friends start donning Disney princess costumes.)

“Yeah,” JP’s five-year-old sister piped in. “She doesn’t sit around waiting for someone to write a story about her. She just begins her own story!”

Wow. Perhaps it’s time I turned over the authorship of this blog to my kids. Thank you, Shannon & Dean Hale and Ursula Vernon, for giving us spunky opportunists who are helping remake our children’s ideas of Happily Ever After.

Review copies provided by Candlewick and Penguin, respectively. All opinions are my own. Amazon.com affiliate links are provided mainly for ease and reference–although I prefer that we all shop local when we can!

§ One Response to Princesses Kicking Butt

You are currently reading Princesses Kicking Butt at What to Read to Your Kids.