February 12, 2013 Comments Off on Eyes on Abraham Lincoln 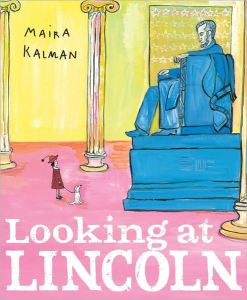 You might expect that my children, living so close to Washington DC, have many opportunities to learn about our nation’s history. But mere proximity does not a future scholar make. The Lincoln Memorial, for example, is consistently celebrated by my five year old as “the place where we picnic in the summer!” If you ask him the name of the president that sits in stone behind him during said picnics, he is likely to throw you a disinterested look and recommence staring out the car window, pointing out other landmarks whose names he boasts correctly but whose significance he understands not. Which begs the question: How do we get our kids to care about the past presidents that have shaped our country?

The biographies we read as kids were filled with dry facts and black-and-white photographs that made their content feel all too disconnected from our daily lives; too often we were encouraged to memorize names and dates for tests, only to forget them a week later. Thankfully, our own kids have access to a whole new generation of fresh reading material, including picture books that breathe colorful new life into historic periods and events.

Last month, I posted here about the many powerful picture books surrounding Martin Luther King, Jr. In school, my son JP and his classmates listened to the CD that comes with Kadir Nelson’s I Have a Dream and were asked to raise their hands every time they heard the Reverend utter the phrase “I have a dream” (as JP was amazed to report to me that evening, “I had to raise my hand a lot!”). So the other day, as we were once again driving past the Lincoln Memorial, I happened to mention to JP that MLK Jr. delivered his speech from the very steps of the Lincoln Memorial. I could literally see the light bulb going off in his head, immediately followed by a “Can we have another picnic there so I can see exactly where he stood?”

This was all the permission I needed to get out the biographical picture book Looking at Lincoln (Ages 5-10), by Maira Kalman. Published just last year, this gem possesses what may be the secret to piquing our children’s interest about historical figures: it humanizes Abraham Lincoln; it makes him feel like a real, relatable person—and it does so by presenting him through the eyes of a young girl. Intrigued by a Lincoln impersonator she passes on the street, this girl heads to the library to research what made Abe so special. What follows are a combination of biographical facts, presented in black typeface, as well as the girl’s own musings, which are rendered in colorful, fanciful typography.

These precocious musings are at times funny, at other times serious and profound; all of them could very well have come out of the mouths of JP and his classmates. “I could look at him Forever,” the girl earnestly writes of his unusual face (I kind of agree). On the subject of Lincoln’s wife, our narrator offers, “On the day he was elected, I bet Mary made his favorite vanilla cake. But maybe he forgot to eat his slice. He was often too busy thinking to eat.” (JP was quite keen to point out the apparent similarity between his own dislike of chocolate and Abe’s preference for vanilla.) Our young narrator gives a particularly moving description of a Civil War uniform that she comes across in her research, one with a bullet hole at the heart: “There were fourteen brass buttons on the front of his tunic. One was shot away. Thirteen brass buttons remains…Terrible things happen in a war.”

This book has everything you need to begin a discussion with your children about Lincoln. The Gettysburg address is even printed in its entirety on the book’s endpapers, and there is an index with more information about the visuals on each page. But the text’s brevity allows us as parents to elaborate as much or as little as we want, taking our cues from our little one’s questions and letting them control how much of this (heavy) information they’re ready for. Kalman’s vibrant, Matisse-like gouache paintings breathe color and whimsy into a previously black-and-white subject, grounding the narrative in contemporary life.

By the book’s end, Lincoln has become memorable in his very tangibility. I’m perfectly happy if all that my son remembers this Presidents’ Day is that Lincoln liked vanilla cake or had a tall hat where he stuffed his notes. What matters is that his imagination has been sparked, the Lincoln Memorial has started to become more than a picnic spot. Over time, JP will begin to understand the meaning behind the other words in the book, words like democracy and justice and freedom, words from our past that will be just as valuable to our children as they seek to shape our future.

The aforementioned vanilla cake and Abe’s tall hat where he kept his notes. “What was he thinking about?” wonders our narrator.

You are currently reading Eyes on Abraham Lincoln at What to Read to Your Kids.