Moving the Classroom to the Woods 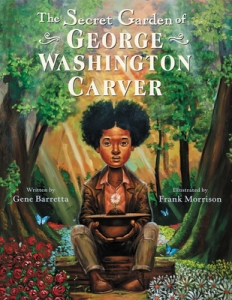 (Friends, these are rough times. I feel you all. And I promise to keep showing up for you with book ideas for all ages. In addition to these weekly posts, I have (almost) daily recommendations on Instagram, so follow me there. We’ll get through this pandemic with the help of fictional worlds and gripping history and funny comics. Worst comes to worst, we can always use the pages to wipe our bottoms.)

It was only the second morning of #pandemicparenting, and the kids and I were already on the verge of strangling one another. My husband needed a quiet house for conference calls, so I threw out our daily schedule (just one day old) and drove the kids to the woods…where we stayed for four hours. It was cold and drizzly when we arrived, and I found myself willing it to be over. We walked and walked, saw no one, walked some more, and eventually settled into our own rhythms. My daughter ran off trail to climb on logs and rocks. My son stopped talking about his stress level and moved through the world quietly. We got lost, had to scramble up rocky ledges to find the trail again, discovered deserted outcroppings of beaches. The sun came out. I sat and listened to the water, while the kids skipped stones. Later, my son threw his arms around a tree, and I laughed out loud.

We’ve had our fair share of highs and lows these first two weeks of social distancing, but I am endlessly grateful that the trees still welcome our closeness. If there are silver linings amidst this collective heartbreak, one is an opportunity to return our children to nature. I never wanted to homeschool my kids; I knew I’d be rubbish at it. (I knew my kids would be equally rubbish at it.) Thankfully, they still have their wonderful teachers, even if they can only see them on a screen right now. I figure, for as long as we’re packed in together like sardines, I can give my kids two blessings: I can read them books; and I can gently push them towards the trees.

You know what social distancing is good for? Secret gardens. If your children need convincing to let nature step in as teacher, read them the extraordinary new picture book biography, The Secret Garden of George Washington Carver (Ages 7-10). My kids were riveted. Evocatively written by Gene Barretta and accented with richly expressive oil paintings by Frank Morrison, the story demonstrates how young George Washington Carver’s intimate relationship with nature as a child grew into a passionate career as a botanist, inventor, and activist. 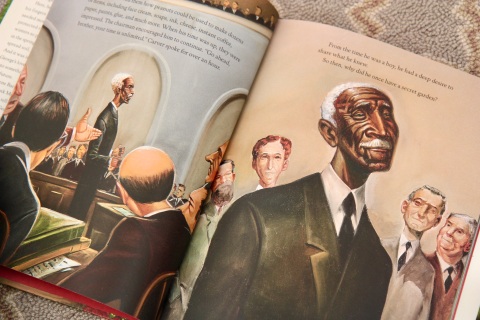 Many of us know George Washington Carver as the man who invented peanut butter (something we’re appreciating in quarantine life). The book begins with a flash forward to 1921, when an adult Carver stood before the U.S. Congress. Black Americans were not often given license to address the government; when they were, they were constrained to ten minutes. But as Carver spoke to his white male audience about the potential of the peanut crop—how peanuts could be used to make face cream, soaps, ink, cheese, instant coffee, paper, paints, glue, and more—the chairman interrupted to let him know he could take as much time as he wanted. Carver’s passion for peanuts was infectious.

Where did this passion come from? Well, for starters, it came from boredom.

George Washington Carver’s passion for plants was born in secret. “No one knew about the garden George kept hidden on the Carter’s farm. No one saw how the child cared for his flowers and how much he loved them.” George was born in 1864, enslaved on the farm of Moses and Susan Carver, who continued to care for him after slavery was outlawed. George was a sickly child, having endured a near death experience when he was little, which meant he couldn’t work long hours; much of his time was spent idle, exploring the woods beyond the farm. Raised an orphan by the Carvers to be “creative with what little [he] had,” George saw potential in every leaf and twig, berry and acorn. When it came to flowers, where others saw foolishness (“You can’t make any money selling flowers!” his brother told him), George saw purpose. 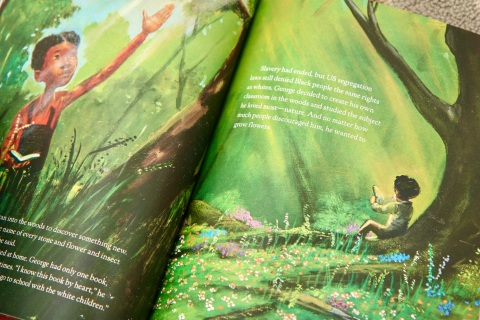 George longed to go to school like white children, but his education was limited to a single book at home. When he grew tired of reading the same book over and over, he sought refuge in his secret garden. There, he studied the flowers, lying on his stomach to examine the soil and roots and leaves. Through experimentation, he taught himself to grow different varieties, to nurse sick flowers back to health, to protect the flowers’ roots through the cold months. Using twigs and crushed berries, he made paintings of the flowers across different seasons to further his studies.

Eventually, George’s knowledge of plants became public. He became known as the “Plant Doctor,” his garden a kind of horticultural hospital for neighbors’ plants that were struggling. At the age of twelve, George decided to expand his classroom beyond the garden, and he left home. Over the next eighteen years, he lived in several states and studied art and agriculture at any school that would have him. Eventually, Booker T. Washington hired him to teach agriculture at the Tuskegee Institute, where he built a laboratory and began experimenting with new crops to replace the cotton which had destroyed Southern land and bankrupted American farmers. Possessing nutrients which uniquely nourished and refreshed the soil as it grew, the peanut quickly became George’s “champion.”

George’s passion for talking up the peanut and other plants wasn’t limited to the US Congress; it reached working people as well. He invented a traveling schoolhouse, which he used to introduce farmers to new tools and techniques for growing and plowing. He is often credited with being one of our most influential environmentalists, so avidly did he preach, “Regard Nature. Revere Nature. Respect Nature.”

George Washington Carver became a scientist who changed our world for the better, who helped people live longer and healthier. And it all started because, as a young boy, he had a lot of time on his hands and a lot of flowers for company.

Review copy from HarperCollins. All opinions are my own. Amazon.com affiliate links, although I prefer we all shop local when we can!

§ 2 Responses to Moving the Classroom to the Woods

You are currently reading Moving the Classroom to the Woods at What to Read to Your Kids.