Bees: To Fear or Not to Fear

Remember last week when I talked about returning our children to nature during this pandemic vis-á-vis secret gardens and long hikes in the woods? Well, there’s just one teeny tiny problem. While we were hiking a few days ago, my son spotted a bee.

Let me back up.

When JP was almost three, during a family reunion in rural Rhode Island, he climbed a ladder to reach an aged treehouse and stood up into a nest of wasps. He was stung twenty-seven times. I know this because the pediatrician, whom I panic dialed, asked me to count the stings. JP was just shy of the number where the poison level would have necessitated getting into the car and trying to find a hospital. Instead, we sat him on the second step of my uncle’s swimming pool, where, immersed in cold water, the screams and swelling eventually subsided.

Perhaps owing to this traumatic event or perhaps just because of the way he’s wired, JP has moved through the past nine years immensely fearful of stinging insects. His fear doesn’t differentiate between wasps and bees. He has read countless books on the subject; he has taken field trips to bee farms; he can rattle off the statistical improbabilities of being stung. No matter. If he hears buzzing, his body goes rigid; if he spots a bee, he flails and shrieks and spends the rest of his outdoor time willing it to be over. He is a hostage to this fear. While I know that with enough exposure and time, he will someday share the outdoors more easily with these creatures, I also know that right now, even more than being afraid of them, he is afraid he will never stop being afraid.

If I could go back in time, short of stopping JP from climbing that ladder, I would take this 2019 picture book with me. It’s what I wish I had read to him in the wake of the wasp event. It’s what I wish I had read to him a hundred times since. In The Thing About Bees: A Love Letter (Ages 3-7), author-illustrator Shabazz Larkin shares his steadfast love for his two young sons alongside an evolving love for bees (not to be confused with wasps), the great pollinators of everyone’s favorite fruits and vegetables. It’s a refreshingly original treatment of a popular subject—why bees matter—because it acknowledges front and center that bees are not easy to love. Indeed, this deeply personal book grew out of the author’s desire not to pass on his own fear of bees to his children. (Quick shout out to Capitol Choices, the children’s literary group of which I’m a part and where I learned of this book last year. Find other treasures on our 2020 list, published here.)

The Thing About Bees begins with a whimsically illustrated spread paying homage to the act of pollination. Because this is a love letter and not a typical work of non-fiction, the language is familial, intimate, and warm: “When a bee and a flower love each other very much, a fruit is born.” 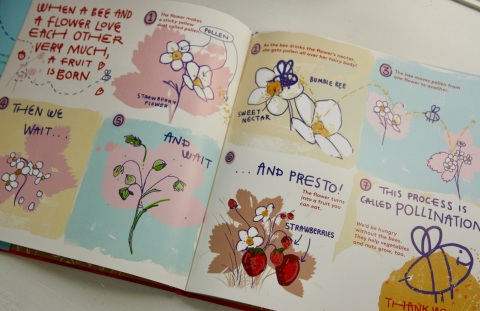 But here’s “the thing about bees,” the book continues, shifting to reveal illustrations of a father at play outside with his two sons:

Sometimes bees can be a bit rude.
They fly in your face and prance on your food.
They buzz in the bushes and buzz in your ear.
They sneak up behind you and fill you with fear.

Most troubling of all, bees sting. And their “sting hurts.” I love that Larkin establishes this straight out of the gate. As if to say, it’s no wonder we’ve got some fear where bees are concerned. Our fear is real. It’s OK to lean into that fear. It’s a fear based on fact.

But where there is fear, there can also be love. As much as we might wish bees would pack up and move away, “if they were gone, it would hurt much worse.” The next spread supposes what a world without bees would look like: “no more picnics with watermelon,” “no more avocados for tacos,” “no more strawberries for shortcakes.” Without bees, we wouldn’t have the apples for apple pie or the cucumbers for pickling. Again, the language pulls straight from a child’s world.

The father then spins a clever analogy for his children. Bees, he argues, aren’t that different from children. His children also buzz in his ear and sneak up behind him. They’ve even been known to sting when they’re in a bad mood. Despite all that, the father reminds his children, “…I never stop loving you.”

In fact, not only does the father love his curious, rambunctious children, he loves them as much as a bee loves sweet cherries. “You’re my sweet cherry[…]You’re my strawberry heart.” A parent’s love for his children knows no bounds and neither should our love for the bees. “That’s the thing about bees. We need them just as much as we need you.”

The book concludes with an Author’s Note, which references Larkin’s lifetime fear of bees, one he has worked to subdue through compassion and research. He goes on to share some of this research with his readers, including a chart distinguishing bees from wasps (one is “kind,” the other “kinda mean”) and some practical advice on “how not to get stung.” We may not be able to control the actions of another wild creature, but we can practice not flailing our arms, and we can don our shoes and hats. 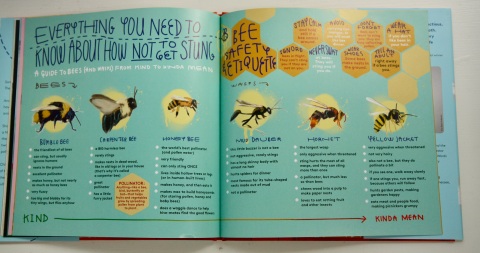 I love Larkin’s mixed-media collages, the movement he brings to his illustrations with loose brushwork and hand lettering and layered colors. I love his beautiful brown-skinned family, depicted with such playfulness and physical affection. I love that, most of the time, he looks more frightened in the presence of bees than his honey-licking children. I love that he has given us parents a script to use with young children fearful of bees, one I feel certain would have helped my own child once upon a time. I love that this is a book about what happens when love triumphs over fear. And how delicious that tastes. 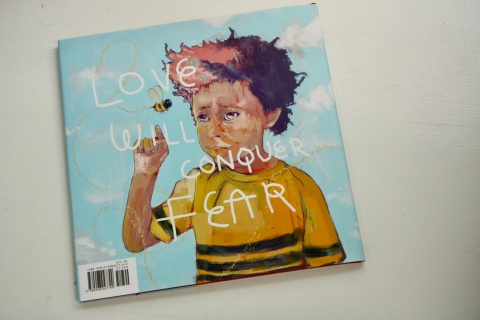 Published by Readers to Eaters. All opinions are my own. Amazon.com affiliate links, although I prefer we all shop local when we can!

§ 2 Responses to Bees: To Fear or Not to Fear

You are currently reading Bees: To Fear or Not to Fear at What to Read to Your Kids.