Gift Guide 2018: My Favorite Graphic Novel of the Year

Vera Brosgol’s Be Prepared (Ages 9-13), about the horrifying, hilarious, and (occasionally) happy moments spent at sleepaway camp, is my favorite middle-grade graphic novel of the year. (I should add that it’s followed very closely by the subversive rags-to-riches The Prince and the Dressmaker, by Jen Wang, but since I’m running out of time, you’ll have to take my word on that one.) Brosgol’s novel, told appropriately through an army green color palette, is a fictionalized memoir of her own childhood experience at a Russian Orthodox sleepaway camp in the early ’90s; and it tugs at our heartstrings as much as it cracks us up. Because even though her camp is at times a horror show, Brosgol nails what it’s like to be away from home at such a trying and impressionable age.

My friends (occasionally readers of my blog, too) have heard me gush about how the eight weeks I spent every summer at an all-girls sleepaway camp in Vermont were some of my favorite—and most formative—parts of my childhood. But I miiiiiight gloss over the less-glamorous moments. Like the very first night, when I tried to ignore the pit of homesickness in my belly and climbed up into the top bunk, only to come nose to nose with a mouse perched on the rafter. Or the fact that I still have the scar from when, on the way back from a middle-of-the-night trip to the outhouse, I tripped on a rock trying to outrun a skunk I felt sure was chasing me. And those are just the animal stories. To say nothing of the times I fought with my best friend and thought I would die from loneliness.

But then there were days when I’d walk barefooted down to the pond, linking arms with other girls and singing at the top of our voices. And oh, did I mention the singing? There was the table-thumping mealtime singing (the louder the better), followed by the quiet campfire singing on the archery field at dusk. There was waking up each morning to the cool, crisp smell of pine needles and the prospect of choice: how would I spend today?

In Be Prepared, nine-year-old Vera is tired of not fitting in during the school year (“too poor,” “too Russian,” and “too different”). Her wealthy friends have sleepover birthday parties, which Vera’s own single mother can never replicate (it’s supposed to be a Carvel ice cream cake, not a charity handout from a woman at church!). Most maddening, these girls take every occasion to brag about the posh sleepaway camps they attend in the summer. 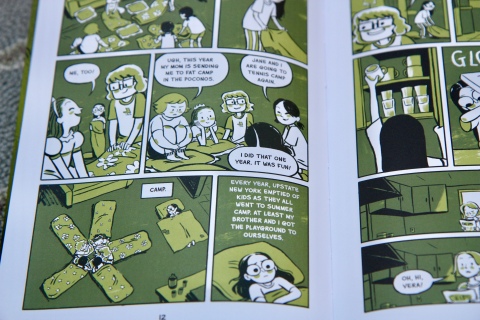 But then Vera gets wind of a church-sponsored Russian sleepaway camp near a lake in Connecticut (crafts! canoeing! singing! bonfires!) and convinces her mom to send her and her younger brother for what turns into four weeks. At last, she will do the things her rich friends do! She packs her bags weeks before departure, and she can hardly contain her excitement when her mom turns down the private dirt road to the camp. “It felt like entering another country.”

Only nothing about Camp ORRA (Organization of Russian Razvedchiki) matches any of Vera’s fantasies. For one, there’s no candy allowed. For two, there’s wood to chop, no running water, and an outhouse nicknamed Hollywood which would scare the poop out of anyone. For three, you’re supposed to speak in Russian…and sit through long church services…and attend daily classes on Russian history. Oh, and the horseflies are as big as birds, and there are mysterious heavy footsteps outside your tent when you’re trying to sleep. 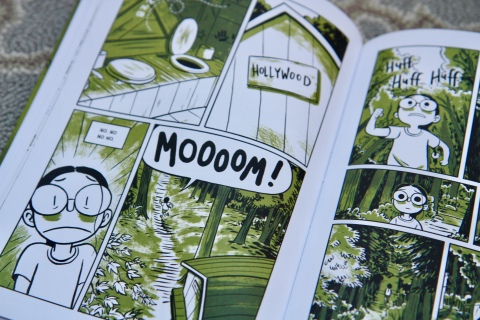 And then there are Vera’s bunkmates: two camp veterans who are best friends and four years older than her (translation: they wear bras and use maxipads).

Still, Vera—proud, resilient, and a tad feisty—is determined, not simply to grin and bear it, but to “beat” it. She will win over her obnoxious, bossy, boy-obsessed bunkmates if it’s the last thing she does (even if it means breaking a camp rule). She will steal the flag from the boys’ camp and become a legend among the other girls. She will earn top badges for her wilderness knowledge. She will figure out how to poop in that outhouse.

Only somewhere along the way, Vera begins to realize she is focused on all the wrong things. There is a true friend—a slightly younger girl, who takes an interest in Vera’s prolific sketching—right under her nose, if she would just notice her. There is a chance to appreciate, even embrace, her Russian heritage. And there are the woods, with opportunities for freedom and mystery and wonder. 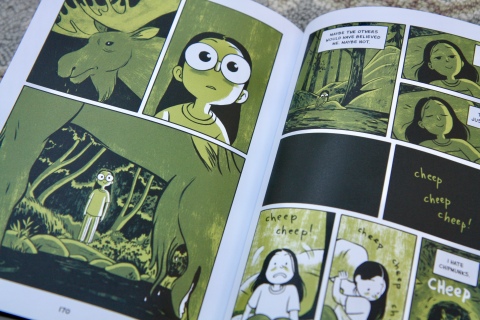 Vera’s summer isn’t anything like what she envisioned. But, like the best summers, it is ripe with self-discovery, growth, and an appreciation for modern plumbing.

Published by First Second. All opinions are my own. Amazon.com affiliate links are above, although I prefer that we all shop local when we can!

You are currently reading Gift Guide 2018: My Favorite Graphic Novel of the Year at What to Read to Your Kids.