Where are my World War II buffs at? If my son’s reaction is any indication, they will want to read this incredible, largely unknown story. When Thirty Minutes Over Oregon: A Japanese Pilot’s WW2 Story (Ages 7-10), written by Marc Tyler Nobleman and illustrated by Melissa Iwai, first showed up on our doorstop, my son took one look at the Japanese prop plane on the cover and whisked it away. He returned twenty minutes later. “Mommy, this book is AMAZING. You will definitely want to write about this.”

What sucked my son in was the promise of warfare, which the story initially delivers on, giving a fascinating account of the only two times the United States’ mainland was bombed during WW2, both times by Japanese bomber pilot Nobuo Fujita, during a covert mission off a submarine in 1942. Say what?! Why have I never heard about this? That’s because the bombs did very little damage. Dropped over a large forested area outside the town of Brookings, Oregon, the bombs were intended to start a large fire which would then spread to nearby towns—only the ground was too wet for the flames and smoke to catch. The greater danger befell Nobuo himself, who almost couldn’t locate the sub on his way back from the second bombing and nearly ran out of fuel in the air.

The bombings, however, are just a part of the book’s story. More extraordinary is what happened twenty years later, in a rare and beautiful example of reconciliation between two former foes. In an effort to drum up tourism, Brookings mailed an invitation to Nobuo in Japan, inviting him to attend their Memorial Day festival as a guest of honor. Nobuo, who lived outside Tokyo and owned a hardware store, had long suffered depression and guilt following the war. He had “never [not even with his family] discussed his Oregon raids, though they were rarely out of his mind.” He knew the intention of the raids had been to harm and kill. When word got out about the invitation, many people in America were as shocked as Nobuo’s family to learn what he had done. And many on both sides of the ocean felt Nobuo should decline the invitation. In America, there were protests and petitions. 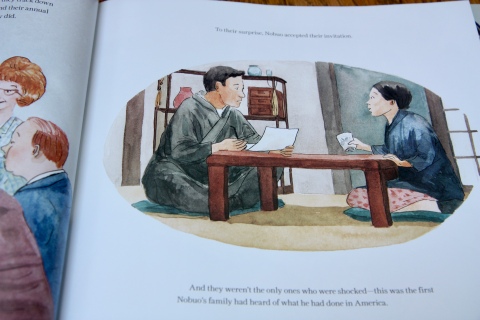 Still, the governor of Oregon, backed by President John F. Kennedy, spoke out in support of the invitation, echoing the sentiments of a local veteran, who said of Nobuo, “he was doing a job and we were doing a job.” Nobuo and his wife flew to Oregon on a jetliner. (“A little larger than the plane in which I made my first trip,” Nobuo joked.) 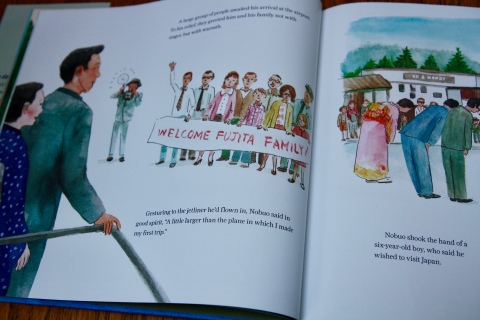 Nobuo’s visit to Brookings—and the reciprocal visits that followed, including one 23 years later, when Nobuo paid to host three Brookings high school students in Tokyo—showcases the very best of our two countries. Indeed, it showcases the very best of humanity. I can scarcely read these pages without tearing up. There is such dignity in the way in which the town of Brookings sets aside the past and honors Nobuo with an American parade. (There’s good fun, too, when Nobuo is served “a large submarine sandwich topped with a plane made of pickles and a half-olive helmet.”) Similarly, there is such grace in the way Nobuo gifts to the people of Brookings his 400-year-old samurai sword, the same family heirloom he kept with him for luck during the wartime raids. Or in the way he shows Americans around his homeland. “The war is finally over for me,” Nobuo said.

Children may come to this book for promises of planes and bombs, but they will leave with an appreciation for the wounds of war—and a hope that some of these wounds can be soothed through forgiveness. Nobuo and the people of Brookings kept up their friendship until the very end of Nobuo’s life, when a Brookings town representative sat with Nobuo on his deathbed and explained that the town had made him an honorary citizen. To this day, the Brookings library houses thousands of dollars’ worth of children’s books about other cultures, all donated by Nobuo. “[Nobuo] wondered if World War II would have been different had his generation grown up reading books like those.”

I can’t help but hope that reading books like Thirty Minutes Over Oregon might also help our children’s generation think about what can be gained from letting our heart, not our politics, fly the plane.

Review copy from Clarion Books. All opinions are my own. Amazon.com affiliate links are above, although I prefer that we all shop local when we can!

You are currently reading Gift Guide 2018: The WW2 Story You Haven’t Heard at What to Read to Your Kids.