Call it Seasonal Affective Disorder; call it the anticipation of school closures (let’s just give up now); call it the fact that it now takes us seven times longer to get out of the house: whatever the reason, as soon as a cold snap hits every year, I want to hibernate. And yet, consider this, my fair-weathered friends: the polar bear—a creature who lives in the coldest corners of the Earth; who eats, walks and sleeps on ice; and who is surrounded by nothing but white and blue all day, every day—does not hibernate.

That someone can love the cold this much—and, in fact, depend on it for its very survival—is just one of the many things that endear us to the polar bear, as evidenced in Jenni Desmond’s extraordinary tribute, The Polar Bear (Ages 6-10), a factually accurate yet poetic picture book with some of the most stunning illustrations I have ever seen (seriously, I’m not sure I can bring myself to shelve this book, its cover is so gorgeous).

I’ve said it before and I’ll say it again: if non-fiction looked and sounded like this when I was a kid, I would know a lot more.

Desmond’s title is the second in a new series about threatened species (I raved about The Blue Whale in this guest post; and I am giddy that her third will feature elephants). She’s never preachy: on the contrary, the only mention of the plight facing the polar bear—global warming, which has led to less ice on which the polar bear can hunt—is in the Author’s Note, which prefaces a 38-page celebration of the physical and behavioral adaptations of this magnificent animal and its unforgiving habitat. And yet, one cannot read this book, in light of that Author’s Note, without feeling both awe for the polar bear’s present and fear for its future.

Invoking a kind of metaphysical book-within-a-book approach that seems to be catching on in children’s non-fiction (see also Jason Chin, whose Redwoods and Coral Reefs are nothing short of astounding), Desmond’s books explore their subjects through the eyes of a child who is reading about them. In the case of The Polar Bear, as a child pulls the same book off the shelf, the line begins to blur between reading and living, until the child herself becomes a kind of witness and companion to the very bear about whom she studies.

She reads that the polar bear is also called a sea bear, and that this huge marine mammal spends most of its life on ice and snow of the frozen Arctic Ocean. In the spring and autumn, the flexible sea ice can bend and give way under the polar bear’s colossal weight. In the summer, there is virtually no ice to hunt across. In winter, the polar bear walks for miles over solid expanses of ice in search of food.

Desmond’s washes of white and grey are all the more striking when contrasted with the whimsy and detail in the girl’s attire—her red and white striped stockings, her red checked crown. A terrain never looked bleaker, yet never more beautiful. (Desmond explains that the polar bear’s coat is actually yellow or grey—and its skin black—but the effect is one of whiteness because of the bright, uninterrupted sunlight).

We are not strangers to books about polar bears in this house. Perhaps because he has always had a deep love of winter himself, my son has chosen to study polar bears more often than any other subject in school; and last winter I posted about Jeanette Winter’s Nanuk: The Ice Bear, a sparse but lovely introduction to the life cycle of the polar bear. Desmond’s book is much denser, aimed at the mind that wants more, more, more, yet the narrative is equally lyrical. A polar bear’s enormous paws, for example, not only “act like snowshoes, spreading out the bear’s weight as it moves across deep snow and fragile ice,” but they have tiny little bumps (like the surface of a basketball) to prevent the animal from sliding. All of these facts are synthesized in real time by the child in the book, as by us. 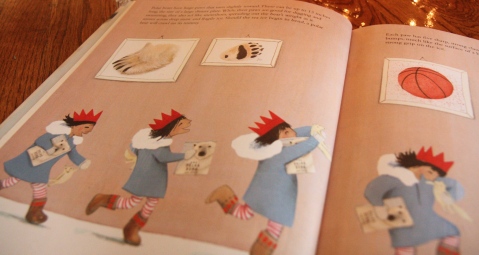 My kids were fascinated to learn that you can count the rings inside a polar bear’s tooth to find out how long he has been alive. Ditto that polar bears can smell a seal from many miles away—even more so when they stand on their hind legs—and that one seal can satisfy a polar bear for 11 days. I can guarantee your child, like mine, will feel the need to trace each of these dotted lines to see which food source the polar bear is smelling in the book. 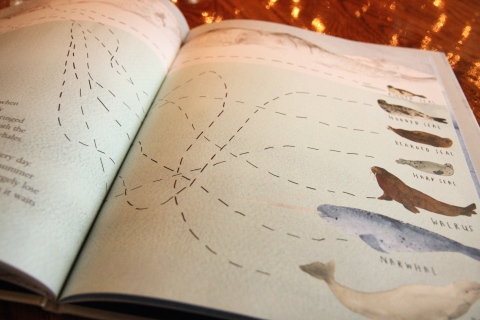 We often hear how vicious polar bears are, so I was shocked to find out the polar bear successfully kills only one out of every twenty seals that it hunts, owing to the seal’s superior swimming ability. My respect for these resilient creatures only grows! My kids, on the other hand, were more impressed by the blood spattered across the bear’s mouth and paws after killing and eating a seal—a mess that the finicky polar bear is quick to scrub off once his meal is digested. 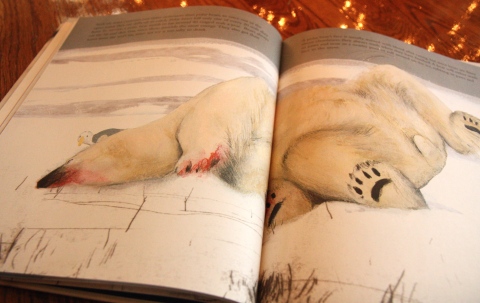 More blood is spilled (although not pictured) during the “savage battles” between males at mating time, resulting in the impregnated females digging birthing dens well beneath mounds of frigid snow. Curled around her cubs, this is the closest the female polar bear comes to hibernating—and, indeed, we can certainly relate to the desire to snuggle our little ones close and warm.

Polar bears do not hibernate. They like to sleep though, and can sleep almost anywhere at any time. Like humans, polar bears sleep in different positions. On warm days, they might stretch out on their back with their feet up in the air or lie down on their stomachs. On cold, snowy days, they curl up with a paw over their snout for warmth, letting the snow cover them like a blanket.

It doesn’t get any sweeter than that.

This is my last post of 2016. May 2017 dawn with a plethora of new books and a renewed passion for protecting our planet and the marvelous creatures who share it. In the meantime, I hope you and your loved ones sleep tight.

Book published by Enchanted Lion Books. All opinions are my own. Amazon.com affiliate links support my book-buying habit and contribute to my being able to share more great books with you–although I prefer that we all shop local when we can!

You are currently reading Gift Guide 2016 (No. 6): For the Non-Fiction Lover at What to Read to Your Kids.