A Fresh Take on a Holiday Tradition

somber posts, I am shifting tones to herald one of the most spellbinding picture books of the year, inspired by one of our family’s favorite holiday traditions.

I confess I never liked The Nutcracker much as a kid. I thought the Mouse King was creepy, I thought the dancing was long, and I thought the Sugar Plum Fairy’s castle consistently under-delivered on such a lofty name. Either I was a cranky kid, or I wasn’t seeing the right performances (or reading the right books ahead of time).

Then I became a parent and two things happened. First, beloved British illustrator Alison Jay came out with arguably the sweetest, cheeriest, and loveliest picture book adaptation of The Nutcracker—one that the kids and I have looked forward to unpacking with our Christmas decorations and savoring afresh every year.

Secondly, my husband and I started taking our kids to the Washington Ballet’s production of The Nutcracker at the Warner Theater in DC, a deliciously accessible performance for young children, where twinkling lights and perfect tutus send shivers of excitement down our dressed-up spines (and whose creative liberties involving a Mouse King cast in a Revolutionary War battle scene ensures my son is every bit as enchanted as his sister).

Now that we are Nutcracker enthusiasts—and now that Tchaikovsky’s music officially marks for us the start of the holiday season—I decided that this year we were ready to explore the darker, more mysterious intonations of the ballet.

And, just like that, the Thailand-born British illustrator Niroot Puttapipat launched the most breathtaking children’s edition of The Nutcracker that I have ever seen. Inspired by the sets from Marius Petipa’s original production in Saint Petersburg on December 18, 1892, the sophisticated adaptation not only hearkens back to the origins of the story, but it nudges at our dreamy subconscious in the same way that, say, Grimm fairy tales do. Puttapipat’s book isn’t scary, but it has an element of mystery and magic that feels just the tiniest bit unsettling—and leaves us wanting more.

If Alison Jay’s book is sugary and sweet and makes us want to twirl across the living room, Puttapipat’s keeps us squarely transfixed on the page. My kids and I cannot stop looking at this book. Some of you may already know Puttapipat’s unique artistic style from his previous Jingle Bells and The Night Before Christmas (clearly, I’m late to jump on this bandwagon).

In The Nutcracker, delicate black silhouetted figures—almost haunting in their absence of detail and expression—are set against sumptuous swaths of color. Expanses of black set pieces are juxtaposed with meticulous fine-point detailing, like the embroidery on the Nutcracker Prince’s coat or the ornaments on the Christmas tree.

Think of these like the landscapes of our dreams, where certain things take shape but others are shrouded in darkness.

It’s not just the unexpectedness of these visuals that entices; it’s also the emotion that radiates from every page. There’s no expression on young Clara’s face, yet we feel her heartbreak as she crouches beside her broken nutcracker.

We feel Clara’s worry as she watches the battle between the come-to-life nutcracker and the evil Mouse King (before she chucks her slipper at him to end things once and for all). 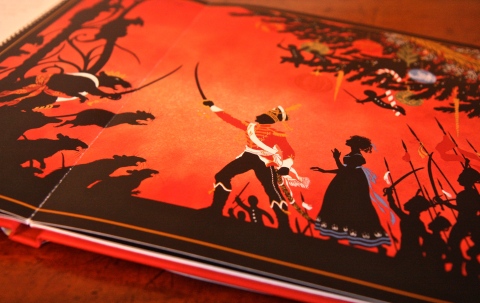 The text, which runs along sidebars on each spread, is adapted by Kate Davies and closely based on the original texts by E.T.A. Hoffman and Alexandre Dumas. Yet, rather than feeling stiff or outdated, it too soars with drama and lyricism, aiding and embedding Clara’s magical journey alongside the Nutcracker Prince to the Land of Sweets.

They traveled by swan over gold-flecked oceans and silver-edged cities. Clara held her breath, her eyes wide. As she gazed at the twinkling lights far below, snowflakes pirouetted past. The prince caught one and gave it to Clara. “Try it,” he said.

Clara let the snowflake dissolve on her tongue. “Mmm. Rosebuds and raspberries!” she said.

“Mine is peppermint and honey,” said her prince. “Every snowflake tastes unique.” 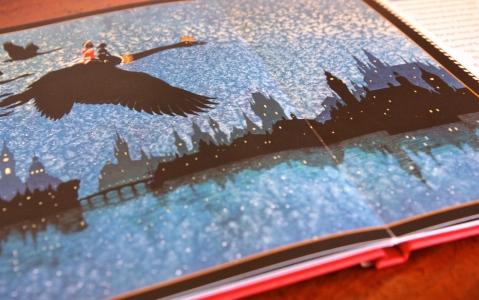 The Land of Sweets does not disappoint. While the text describes lemonade flowing from fountains and lollipops growing in flower beds, Puttapipat’s magical picture (it might be my favorite) delivers us a castle whose dark spires stand bold against a shimmering night sky; a moss-draped walking bridge that’s fit for starry romance; and a Sugar Plum Fairy whose wings look like they have been cast in sugary ice. It is enough to make Believers out of the most hardened of us.

Oh, but there’s more. As Clara and the Prince prepare to enter the castle, the page turns to reveal a pop-up spread of cut-paper art that might be one of the most magnificent things I’ve ever seen in a children’s book.  This is a castle that delivers: a castle at once light and dark, at once festive and mysterious. The silhouetted figures that flank the scene are nods to the different styles of international dance that follow in the actual ballet.

What happens inside the castle is largely left to the imagination (until we go to the ballet, that is). The book—somewhat abruptly—concludes on the next page, with Clara waking up back home with the wooden nutcracker in her arms. “What a wonderful dream, she thought. But she could still taste lime and mint…”

And then something happens that is not in the Alison Jay version and which elicited an audible shudder from my daughter (“Ooooh, Mommy, that’s so mysterious!”). I’ll let your children discover that surprise on their own.

Traditions have the best chance of standing the test of time if fresh life can occasionally be breathed into them. Niroot Puttapipat reminds us that our family has only scratched the surface of enjoying this 125-year-old ballet.

Review copy provided by Candlewick Press. All opinions are my own. Amazon.com affiliate links support my book-buying habit and contribute to my being able to share more great books with you–although I prefer that we all shop local when we can!

§ One Response to A Fresh Take on a Holiday Tradition

You are currently reading A Fresh Take on a Holiday Tradition at What to Read to Your Kids.