May 19, 2016 Comments Off on Subterranean Thrills

There was a moment on the subway, during our recent trip to New York City, when my five-year-old daughter turned to me and said, “Wait. Mommy. Are we actually underneath buildings and streets?” At first, I was a bit taken aback. Since birth, she has ridden on the subway, both in New York and at home in Washington DC. Why is she just grasping this now? And yet, the more I watched her absorb my affirmative answer, then spend the next several days kneeling on her seat, staring out the window into the blackness of the roaring tunnel, the more I realized that the whole concept of the subway is in itself quite astonishing.

Astonishment is exactly what the “distinguished citizens, reporters, and government officials” of New York City felt on February 26, 1870, when an inventor named Alfred Ely Beach led them into a 294-foot-long tunnel that he had helped build underneath the streets of New York, in order to showcase his fan-powered train that he believed would solve the city’s transportation problem. How this came about and what happened next—the largely forgotten story of New York’s unofficial first subway, which predated by 42 years the city’s plans to build an official subway system—is detailed in the fascinating new picture book, The Secret Subway (Ages 6-12), by Shana Corey and illustrated by Red Nose Studio.

Engineering, garbage, corruption, secrecy, and spectacle: it’s all here. Not to mention the arresting visuals that are Red Nose Studio’s three-dimensional illustrations, whose play of light against dark, gloss against grit, perfectly pit the lure of new technologies against the backroom politics of nineteenth-century urban life.

The book opens by asking the reader to imagine what the cobblestone streets of the “greatest city on earth” looked like in the 1860s, when pushcarts and open-air buggies bumped into one another and horses kicked up dust and garbage. “Something had to be done!” Ideas, many of them outlandish, were tossed around, from moving roads to railways on stilts.

Beach, the son of a publisher and a self-proclaimed inventor (he would grow up to become co-owner and co-editor of Scientific American magazine) had his own vision: What if he built a train powered by an enormous fan? he wondered. It would travel underground, where there was no traffic or trash or weather to worry about. People would get where they needed as if by magic! (In fact, if we look beyond the graffitied seats and the bodily exchanges and the braking screeches, riding the subway even today does feel a bit magical. Especially as seen through the eyes of our un-jaded children.)

In the long line of history-makers who had to break rules to overcome great obstacles, Beach was no exception. He knew he’d never get permission from the city to dig up the streets—especially not from “Boss” Tweed, the man who unofficially ran the city’s political scene. So Beach did something super sneaky. As my son would say, he lied, but just a little and for a really good reason. Beach asked permission to build a series of mail chutes under the city (pneumatic tubes were already in use in London) and Boss Tweed agreed. Beach then assembled a team of workers but, in addition to building tiny tunnels throughout the city for mail chutes, they also built IN SECRET and IN THE DARK OF NIGHT a much larger tunnel—eight feet wide and lined with brick and steel—that was big enough for a train. For 58 days, Beach’s men tunneled under cobblestones, sewers, and pipes with a hand built machine that allowed them only sixteen inches of progress per day. For 58 nights, wagons hauled away clandestine loads of rock and dirt—all while “Boss Tweed lay tucked in tight.” 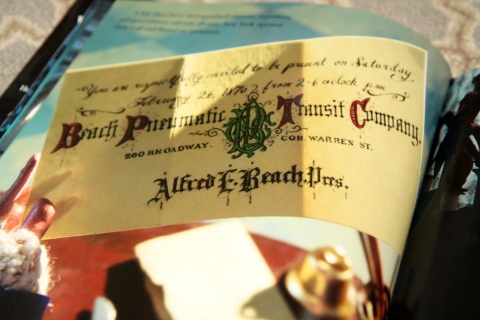 A good sales person knows the value of theatrics in a pitch, and Beach was once again no exception. He not only mailed out calligraphic invitations in advance of his grand reveal (“You are respectfully invited to be present on Saturday, February 26, 1870, from 2-6 o’clock pm”), but he decorated his office, located in the basement of Devlin’s Clothing Store, with “glowing gaslights,” paintings, flowers, “a fountain that glittered with goldfish,” and a spread of cheeses and pastries. Beach then invited his distinguished guests down six more steps, where a single car waited on tracks that disappeared through a hole in the wall.

In time, Beach’s invention opened to the public. The next spread displays a kind of thrill and unreserve typically reserved for amusement parks, whereby men with top hats and women with pinafores are jerked one way and then another, as they experience their twenty-five cent ride aboard the fan-powered train. “Remarkable!” “The railroad of the future!” “The problem of tunneling Broadway has been solved!”

And yet, change is rarely seamless. Beach’s invention met with criticism from shopkeepers, who wanted to keep potential customers above ground, as well as from Boss Tweed himself, who had promised his own people a chance to plan a railroad. Eventually, the governor squashed Beach’s proposal to expand, and “the underground train was stopped in its tracks.” Over time, Beach’s tunnel was abandoned…and, for a while, completely forgotten.

That is, until February of 1912, sixteen years after Beach’s death, when a team of construction workers, building what would become New York City’s official subway system, ran into “a little railroad car rusting in its tracks, and a tunneling machine perched at the end.” Beach’s story was revealed, now poised for the day when someone like Shana Corey would write it into the records for our children.

As if Beach’s invention wasn’t inspiring enough, there’s a second creation story hidden in the The Secret Subway. And I mean quite literally hidden. Peel off the book’s dust jacket, turn it over, and there is the story of how the art in the book came about. Chris Sickels (a.k.a. Red Nose Studio) has detailed the process by which he researched images of the Beach Pneumatic Transit Company, sketched out the story, created color studies, formed characters’ bodies out of wire and foam, sculpted heads from polymer clay, built a railroad car from a cardboard tube, and painted backdrops for his photographs. My kids were obsessed. (My kids were so obsessed, we had to go out and purchase Red Nose Studio’s 2010 picture book, Here Comes the Garbage Barge, in order to see if its cover had the same artistic reveal. It does. Plus, the story, based on the true events of a garbage barge that traveled up and down the East Coast trying for 162 days to unload excess garbage from Long Island, is equally captivating.)

A few days into our real live subway adventures below the streets of New York, my daughter spotted something on the N train. “Mommy, look! Doesn’t that look like the book we have about the subway?” Indeed, above the row of faces opposite us was an illustration of a man running down a subway platform, which looked stylistically similar to the art in The Secret Subway. When we got home, I researched it, and sure enough, Red Nose Studio was commissioned by MTA Arts & Design to create a “subway card” to display on certain contemporary subway cars. It seems that once you start tapping into the history of trains tunneling underground, the wonder never ceases.

All opinions are my own. Amazon.com affiliate links are provided mainly for ease and reference–although I prefer that we all shop local when we can!

You are currently reading Subterranean Thrills at What to Read to Your Kids.