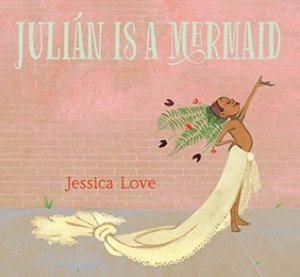 Before I sing the praises of Jessica Love’s triumphant, must-read new picture book, Julián is a Mermaid (Ages 4-8), a story celebrating self-love and unconditional acceptance, I need to come clean on something that happened four years ago in our house.

In 2014, when my children were four and seven, a box arrived from Penguin Group. In the box was a stack of picture books for possible review; all except one were titles I had requested. “I’m going to throw in an extra book, which I bet you would love to write about,” my rep and good pal, Sheila, had told me. My kids did what they do every time a box like this arrives: they dragged it over to the sofa, climbed up next to me, and began pulling out books for me to read. When they pulled out I am Jazz, I didn’t recognize the title or the cover, so I figured it was Sheila’s pick. We dove in blind. END_OF_DOCUMENT_TOKEN_TO_BE_REPLACED

May 19, 2016 Comments Off on Subterranean Thrills 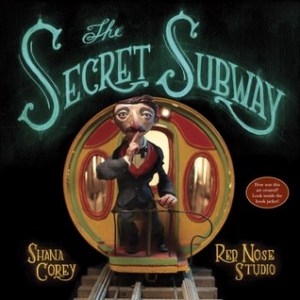 There was a moment on the subway, during our recent trip to New York City, when my five-year-old daughter turned to me and said, “Wait. Mommy. Are we actually underneath buildings and streets?” At first, I was a bit taken aback. Since birth, she has ridden on the subway, both in New York and at home in Washington DC. Why is she just grasping this now? And yet, the more I watched her absorb my affirmative answer, then spend the next several days kneeling on her seat, staring out the window into the blackness of the roaring tunnel, the more I realized that the whole concept of the subway is in itself quite astonishing.

Astonishment is exactly what the “distinguished citizens, reporters, and government officials” of New York City felt on February 26, 1870, when an inventor named Alfred Ely Beach led them into a 294-foot-long tunnel that he had helped build underneath the streets of New York, in order to showcase his fan-powered train that he believed would solve the city’s transportation problem. How this came about and what happened next—the largely forgotten story of New York’s unofficial first subway, which predated by 42 years the city’s plans to build an official subway system—is detailed in the fascinating new picture book, The Secret Subway (Ages 6-12), by Shana Corey and illustrated by Red Nose Studio. END_OF_DOCUMENT_TOKEN_TO_BE_REPLACED

New York City From Above & Below 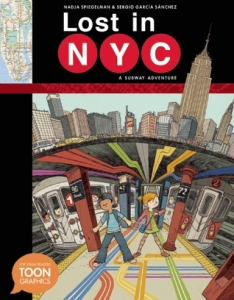 My son and I just returned from one of our beloved fall traditions: a long weekend in New York City. I take sublime pleasure in watching JP fall deeper in love with the city of my childhood at every visit: soaking up the street sounds (“I don’t know if I’ll be able to sleep without the horns and sirens,” he told me in all seriousness on the night we got home); quickening his walking pace to keep up with the most seasoned striders; and taking an active roll in navigating us through the city streets, both above and below ground.

This last point is in large part owing to two things: first, JP’s recent discovery of the NYC subway map; and secondly, his fondness for the Empire State Building, which we summitted on our previous trip to the city. When he is not rattling off the list of upcoming stops on an uptown train ride, he is looking around him on the street for the landmark against which to measure all landmarks.

We discovered this past weekend (thank you, Books of Wonder) that there is a new children’s book that marries JP’s love of the subway with the Empire State Building. I’m declaring it required reading for natives and tourists alike. Because get this: it is now MY FAVORITE NEW YORK BOOK OF ALL TIME.

END_OF_DOCUMENT_TOKEN_TO_BE_REPLACED

You are currently browsing entries tagged with subway at What to Read to Your Kids.