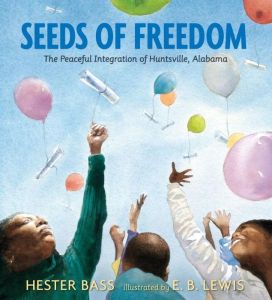 Last spring, I took my then three year old daughter shopping for shoes. It was a rainy Saturday, we had just come from her first early morning soccer practice (to which she had worn rain boots), and with plenty of time to kill before lunch, I figured we’d hunt down some sensible, sports-worthy sneakers. As we stepped, hand in hand, through the automatic doors and into the giant monstrosity that is Rack Room, it occurred to me that I had never taken her shopping before. I was feeling a little giddy.

We soon found ourselves standing before towering steel shelves, endless rows filled with mix-matched boxes of child-sized sneakers. “Let’s see,” I said, pulling down a Nike box with a pair of bright turquoise Velcro sneakers. “How about these?”

I started to panic. Oh right, this is why I have never taken her shopping. Why did I forsake my precious Zappos for this place?! As the steel walls and high-pitched whining began to close in on me, I made a quick decision.

“OK, honey, here’s what we’re going to do. You can try on every pair of shoes that you want. Take your time. You can walk all around the store in whatever shoes you want. But when it comes time to leave, we are only going to buy one pair, and it’s going to be a sneaker that Mommy thinks will be good for running. It’s going to be a good, sensible shoe that fits you well. But for now, have at it.”

The girl tried on shoes for two. straight. hours.

In the end, we left the store—Emily proudly carrying a bag with the original turquoise Nikes that I had picked out.

This story has approached something of Legend status in our house. “Mommy,” my son will beg, “tell the story of how Emily tried on every shoe in the store!” And I do. And we roll our eyes and chuckle. Even Emily.

But then, recently, one day after school, as the three of us splayed across the couch reading an account of what happened in one Alabama city during the Civil Rights Movement, our shoe story took on a whole new meaning. Because, you see, it had never occurred to any of us that, regardless of which shoes we bought on that rainy day back in April, the mere act of trying them on had been in itself a right. With each shoe that Emily tried on, she was unknowingly exercising a personal freedom—one for which others had once been forced to fight.

Seeds of Freedom: The Peaceful Integration of Huntsville, Alabama (Ages 6-12), written by Hester Bass and beautifully illustrated by E.B. Lewis, chronicles both the small and large events that occurred in this unique Alabama city between January 1962 and September 1963. The book opens with a painting of an African-American girl in an Alabama shoe store. She is seated in a chair, holding up a piece of paper with the outline of her feet traced in black marker. “A girl carries paper pictures of her feet because she won’t be able to try on shoes.” This is the child reader’s introduction to the racial segregation still deeply rooted across the South in the 1960s, despite Civil Rights Acts passed by the American government as early as 1866, and despite the growing momentum created from activists like Dr. Martin Luther King, Jr. 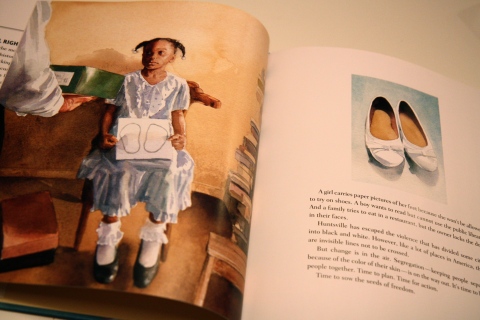 But the story that follows is one of integration, not segregation. Only it’s not your typical integration story. Contrary to much of what our children will hear about the Civil Rights Movement, the transition from segregation to integration in Huntsville, Alabama—while certainly not a smooth one—was characterized by a surprising absence of violence: no riots, no tanks, no bombs. This would not have been possible without the commitment of both black and white citizens, who ultimately chose to put the health and economic viability of their city above their personal and cultural differences.

Hester Bass, herself a former resident of Huntsville, does an exceptional job of drawing us into the details of what went down in those twenty months. It’s hard not to argue that many of these events displayed sheer creative genius on the part of the African-American community. Yes, there were marches, and yes there were sit-ins at lunch counters, neither dissimilar to what was happening throughout the rest of the South. But, in Huntsville, some black women got “tricky” and started bringing swaddled infants to these sit-ins, because “it’s hard to keep it quiet when a baby goes to jail.” Huntsville was at the time the proud center of the US Space Program, the headquarters of American rocket construction in the quest to put a man on the moon. Dependent on government aid, and the target of high-profile visits from President Kennedy, the city could not afford bad press (like putting babies behind bars)—and people on both sides of the racial divide knew it. 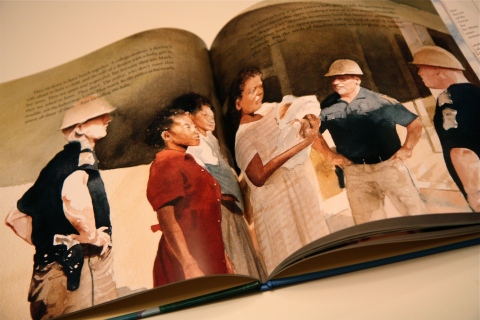 The African-American community in Huntsville began to assert their presence in other ways, too, like launching hundreds of colorful balloons outside the courthouse, each tied with notes like, “Please support freedom in Huntsville.” 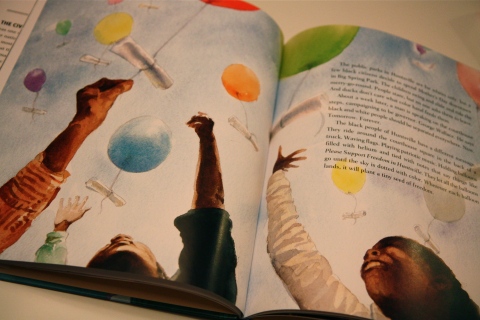 Perhaps the most creative strategy was the implementation of Blue Jean Sunday. Traditionally, Easter was cause for the black community to spend a lot of money on new clothing—in some cases as much as a hundred dollars for a special outfit—and the predominantly white shop owners had come to depend on that revenue. In 1962, black leaders in Huntsville quietly urged men, women, and children to don jeans in place of store-bought clothes for Easter services. “They will stand up for freedom by dressing down.” Some people think Huntsville merchants lost a million dollars that spring. 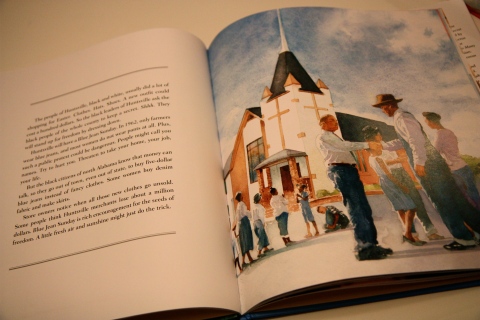 Talk about using your brain! Talk about putting your imagination to work! Can you think of a more inspiring example of effective non-violent protest?

And it worked! It really worked. First, the Huntsville restaurants, hospitals, bowling alleys, and movie theaters began to desegregate. Then, come September 1963, after a rocky first week of locked doors and police intimidation, a six-year-old boy became the first black student to attend a previously all-white public school. Across town, a private religious school boasted the first incidence of reverse integration in the South, when twelve white students joined a formerly all-black classroom. 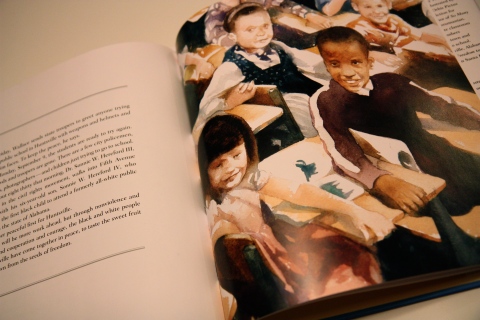 Sure, Huntsville had some extenuating circumstances that other Southern cities lacked (like the Space Program), but still: there was willingness, there was courage, there was a priority of peace on both sides of the racial divide, and that in itself is amazing. I could not get through reading this book without constantly setting it down to exclaim, I cannot believe I never knew about this! This is unbelievable. This is SO COOL. And the best part was: my seven-year-old son was equally riveted. (In all fairness, Emily asked some good questions, too, although the subject matter is definitely geared toward an elementary-aged audience.)

Like most of the best children’s books about race and history, Seeds of Freedom is one that begs to be read aloud and discussed. In our house, it has furthered conversations that we began back with Martin’s Big Words and We Shall Overcome: The Story of a Song; and I hope it will lay groundwork for more challenging books, like the newly-published Turning 15 on the Road to Freedom: My Story of the Selma Voting Rights March, a first-person account of a teenage girl protester, jailed nine times in the Civil Rights Movement and beaten on Sunday Bloody Sunday (talk about mind-blowing).

It seems to me that, regardless of our racial backgrounds, as twenty-first-century Americans, it is not only our responsibility but our privilege to have these discussions with our children. We have a unique chance to honor history both by encouraging our children to ask questions and by making visible our own commitment to learning alongside them. Even in these modern times, there is plenty of necessity for change—for activism—and I’d like to think that there are creative, non-violent solutions to the racial and cultural differences that continue to divide our everyday lives. I’d like to think a book like this will not only remind my children that the mere act of trying on shoes in a store is itself a personal liberty, but that they hold within their imaginations the power to change the world.

Other Favorites About Activism in the Civil Rights Movement:
We Shall Overcome: The Story of a Song, by Debbie Levy & Vanessa Brantley-Newton (Ages 5-10; discussed here)
Sit In: How Four Friends Stood Up by Sitting Down, by Andrea David Pinkney (Ages 6-12)
Freedom on the Menu: The Greensboro Sit-Ins, by Carole Boson Weatherford & Jerome Lagarrigue (Ages 6-12)
Through My Eyes, by Ruby Bridges (Ages 8-12)
Turning 15 on the Road to Freedom: My Story of the Selma Voting Rights March, by Lynda Blackmon Lowery (Ages 10-15)

Review copy courtesy of Candlewick. All opinions are my own. Amazon.com affiliate links support my book-buying habit and contribute to my being able to share more great books with you–although I prefer that we all shop local when we can!

§ 3 Responses to Creative Activism (In Honor of Black History Month)

You are currently reading Creative Activism (In Honor of Black History Month) at What to Read to Your Kids.