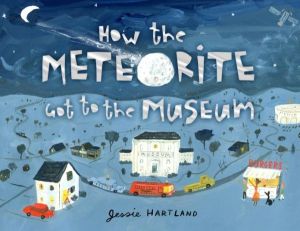 I may have given an audible little yelp the other day when I discovered that Jessie Hartland had published a new title in her “museum” series, but it was nothing like the squeal of joy that my six year old emitted when I brought it home and gave it to him. You see, How the Dinosaur Got to the Museum (Ages 4-8) and How the Sphinx Got to the Museum (Ages 5-10) are among our All Time Favorites, rivaled only by Hartland’s newest addition to the series, How the Meteorite Got to the Museum (Ages 5-10). All three books are brilliantly simple slices of science and history; they introduce children to paleontology, Egyptology, and now astronomy by following a specific artifact from its discovery in the field to its place in the exhibition hall of a museum.

Most great science books take their inspiration from true historical events. Here’s an especially awesome one: on a clear night in October of 1992, a meteor that had been predictably orbiting the sun for four billion years suddenly and inexplicably changed course, entered the Earth’s atmosphere, flew over Kentucky, West Virginia, and Pennsylvania, and crashed into the trunk of a Chevy Malibu parked outside a house in Peekskill, New York (that’s right, crashed—as in, totaled the back of the car and sprung a leak in the fuel tank and precipitated a 911 call to police and fire fighters—pretty much the coolest thing my six year old has ever conceived of).

Let me pause a moment to say that we own A LOT of books about outer space. Some boys have tunnel vision for dinosaurs, others for sports; my boy is Live and Breathe Outer Space. The problem with most of the fact-packed astronomy books, despite their amazing photography and mind-boggling statistics, is that it’s hard for kids (not to mention me!) to internalize the information, to retain it long past the time the book is closed. Don’t get me wrong: JP demands to read these typical non-fiction books over and over again; I’m just saying that the industry is primed for some really good stories about Space, stories that embed scientific definitions and concepts and processes within the accessibility of a narrative format.

Enter author-illustrator Jessie Hartland, who begins How the Meteorite Got to the Museum by painting a crystal clear picture of: the different kinds of debris in Space; the difference between an asteroid and a meteor (which is frankly something I’ve never totally understood until now); how a meteor that “survives a fiery fall to Earth” is actually called a meteorite; and how thousands of meteorites fall on Earth every year but usually land in remote places like seas, deserts, and jungles where they remain undiscovered. Hartland then goes on to give the utterly fascinating blow-by-blow of what happened when this particular meteorite landed in Peekskill, NY—and how it got from the scene of the crime to a museum near you.

Any good science book involves kids: sparks their imaginations and engages their senses. Hartland’s book does so by hitting on the kinds of details that would be funny or interesting to kids, from the dog who barks at the meteorite as it hisses across the sky, to the fans at a Pennsylvania football game who point their movie cameras towards the flying rock; to the giant BANG and CRASH as the meteorite hits the car and startles a teenager in her house; to the firefighter who cools off the smoldering rock with his hose.

Only once we’re invested in the story are we introduced to geologists, museum curators, and cosmologists, each given a brief but worthy introduction before taking his or her place in the ever-increasing line-up (think House-That-Jack-Built style). “Here is the exhibits team at the Natural History Museum, designing the lighting, signage, and diorama for their newest acquisition…which was…explained by the COSMOLOGIST, acquired by the CURATOR OF METEORITES, measured by the GEOLOGIST, chilled down by the FIREFIGHTERS, protected by POLICE, phoned in by the TEENAGER,” and so on.

Hartland is not just a compelling writer; her illustration style is equally accessible to a young audience, filled with childlike drawings, often loose and sketchy, and inclusive of quirky design elements like creative fonts and hand-drawn word bubbles. My son loves these books because they read the way he thinks and they’re drawn the way he draws.

“More exciting than a flying football is the METEORITE, which was…spotted by the VIRGINIANS, and yelped at by the DOG as it zipped toward the Earth.”

At JP’s request, time and again, we have trekked to the Smithsonian to see the very same Diplodocus that’s discovered, excavated, and assembled in How the Dinosaur Got to the Museum. So I wasn’t the least bit surprised when, after hearing at the end of How the Meteorite Got to the Museum that a small piece of the Peekskill meteorite resides in the Smithsonian, JP immediately piped up, “We have to go the Hall of Meteorites! When can we go, when, when when? Do you think they’ll let me touch it?”  Thankfully, now that Washington has gone back to work, the Smithsonian is again open for my son and his Big Plans. He’s also hoping, believing as he does that he has an “eagle eye” for fossil discovery, that he may find a meteorite in our own backyard someday—and that his discovery might make its way into the halls of a museum for children everywhere to ooooh and ahhhhh over.

Other Favorite Narrative Approaches to Learning About Astronomy:
If You Decide to Go to the Moon, by Faith Mcnulty & Steven Kellogg (Ages 4-7)
Mousetronaut: Based on a (Partially) True Story and Mousetronaut Goes to Mars, by Mark Kelly & C.F. Payne (Ages 4-7)
Reaching for the Moon, by Buzz Aldrin & Wendell Minor (Ages 5-10)
One Giant Leap, by Robert Burleigh (Ages 6-9)
Moonshot: The Flight of Apollo 11, by Brian Floca (Ages 6-12)

You are currently reading Bang! Crash! Interstellar Collisions! at What to Read to Your Kids.