Better Together (Maybe for the Apocalypse, Too?) 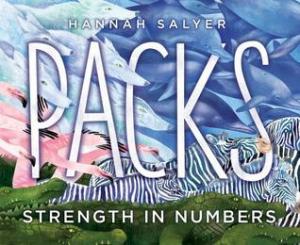 A year or so ago, I was at a summer garden party, all twinkling lights and umbrella drinks, when the conversation took a dark turn. Several folks, none of whom I knew terribly well, began to discuss and debate the provisions they had stored away in the event of an apocalypse. I sat quietly, picturing my own basement with its boxed wedding dress, foosball table, and toys I’d stashed hoping my kids wouldn’t notice so I could gradually move them to the donation bin, and realized how far a cry this was from the scene being described. No crates of non-perishable food, no industrial sized jugs of water, no iodine pills in the event of a nuclear attack, no walkie talkies, no axes, definitely no guns to take down squirrels that could comprise my protein quota.

“Don’t you worry about how you’re going to protect your family?” someone said to me, after I tried to make a joke about my foosball table. I conjured up an image of myself, defending my children against other crazed survivors—all of us presumably reduced to looters or murderers—and I said, only half joking, “In the case of an apocalyptic event, I think it would be best for the future of humanity if my family made a quick exit.” To put it mildly, living off the land in the dark and cold for an extended period of time isn’t really in our wheelhouse.

Last month brought a fresh wave of worry for those of us working hard not to picture End of the World scenarios. We were on the brink of a war with the Middle East. The continent of Australia was burning. A mysterious and deadly virus was (is) rapidly spreading out of China. If we believe apocalyptic-themed fiction, it’s not long until we will be wandering alone in the dark and cold, assuming we are unlucky enough to survive.

And yet, at a time when the news threatens to send us into an ethos of fear and anxiety—to fathom ways of constructing safe houses around our loved ones—children’s literature is there, reliably, with a hefty dose of optimism, a welcome respite from the dark and cold. Especially where gems like Hannah Salyer’s debut picture book, Packs: Strength in Numbers (Ages 5-9), are concerned, we would do well to remember that the animal kingdom has always survived when it turns towards, not away, from one another.

When I was feeling especially spun up last month, a friend pointed me to an article which ran a few years ago on a sci-fi website, titled “What Really Happens After the Apocalypse.” If we examine evidence throughout human history, the article argues, the aftermath of widespread devastation, death, or illness bears little resemblance to the scenes served up in apocalyptic stories, like that of the lone survivor poised to shoot zombies from a makeshift shelter. In fact:

Humans do not, under the pressure of an emergency, socially collapse. Rather, they seem to display higher levels of social cohesion, despite what media or government agents might expect…or portray on TV. Humans, after the apocalypse, band together in collectives to help one another—and they do this spontaneously. Disaster response workers call it ‘spontaneous prosocial helping behavior’, and it saves lives.

As Salyer’s children’s book so beautifully conveys, we have only to look at the animal world for proof that strength, support, and survival are often directly linked to sticking with your pack. Packs may look different from one to another, they may evolve or diversify over time, but the benefits are clear when numbers are on their side.

In the first few pages, children are visually introduced to “packs” (of wolves), “herds” (of buffalo), “huddles” (of penguins), and “pods” (of dolphins), ending with an affirmation that “Together, we are better.” Salyer’s monochromatic washes of colors are stunning. That it’s not always possible to tell where one animal ends and another begins is precisely the point.

The book then turns to ten individual species, lending each a double-page spread with details about how they band together to play, hunt, mate, or protect. Bats who take to the sky in a “cloud” emit high-pitched calls (“echolocation”) to detect prey. Fish swim in “schools” to chase and encircle their unsuspecting prey. 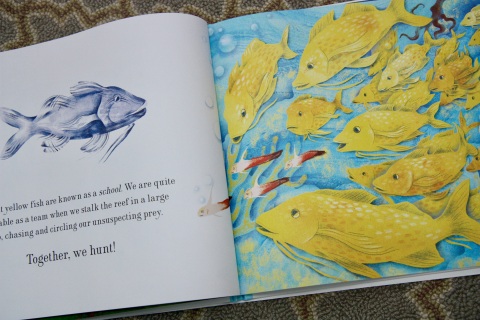 By living in “prides,” lions nurture one another with their physical closeness, as evidenced by their frequent “purrs, licks, and nuzzles.” 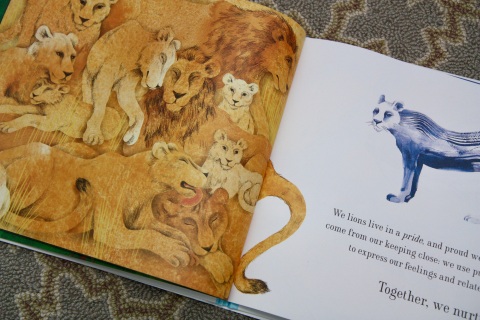 I was pleased to see included one of my personal favorites, the wildebeest, whose herds (called an “implausibility”) are “often a million strong” and who wouldn’t be able to move across the Serengeti without the protection of these numbers.

Proof that numbers are power can also be found among bees, who epitomize the divide-and-conquer approach to work, with some of the swarm collecting nectar from flowers, while others stay back in the hive to care for the young. I particularly love how Salyer plays with her center page folds, with one or two animals spilling over, as if their numbers cannot be contained on just one side.

Packs may introduce children to a few new species as well, like the mongoose (which sleeps in “mobs”). Or to the idea that an animal we might normally spot on its own, like a frog, may be raising its voice in a chorus of others hidden nearby. And then there are some spreads which need very little text to make their dramatic point.

Salyer ends her tribute to the animal world with a nod to humans, also better “together.” Children can draw their own conclusions about the vibrant array of sizes, colors, activities, and jobs on display in one town center, but it could be argued that every single person is enriching his or her surroundings in some way. In its afterward, the book challenges its reader to think about how humans can actually band together to protect its animal friends, especially those under threat of climate change, poaching, and habitat loss. 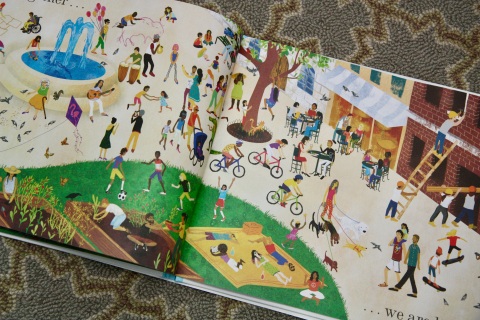 Without question, these are unsettling times. But it’s nice to know that on some primal, instinctual, bestial level, we might not turn on its each other when the going gets tougher. We might just come through it together.

Review copy from Harcourt Houghton Mifflin. All opinions are my own. Amazon.com affiliate links, although I prefer we all shop local when we can!

§ One Response to Better Together (Maybe for the Apocalypse, Too?)

You are currently reading Better Together (Maybe for the Apocalypse, Too?) at What to Read to Your Kids.