With so many spectacular stories, every year it gets harder to narrow down a list of picture books for my Gift Guide. I’ve weighted this year’s list towards fall releases, hoping to ensure that the titles will be new to you or your gift recipient. But I also made exceptions. There were a few books published in the first half of the year that stand the test of time, and I couldn’t imagine a 2022 favorites list without them (Bathe the Cat, Knight Owl, and Endlessly Ever After).

I’ve also concentrated on books that feel inherently gifty. These are books you could gift to almost any child, regardless of how well you know them, and be confident that they’d be charmed and you’d be heroic. If I was strictly making a “best of” list, I would have added titles like Blue: A History of the Color as Deep as the Sea and as Wide as the Sky.

If space and time permitted, I’d remind you of all the books I’ve already blogged about this year (because I only blog about books I love). As well as others I’ve highlighted on Instagram, like Mina, Does a Bulldozer Have a Butt?, Izzy and the Cloud, and Poopsie Gets Lost.

Finally, before we get started, I’ll remind you that I kicked off the Gift Guide a few weeks ago with My Favorite Picture Book of the Year: Mac Barnett and Jon Klassen’s fresh telling of The Three Billy Goats Gruff. I won’t repeat myself here, but don’t forget that if you really want to wow your audience, that’s the ticket.

But, of course, these others are incredibly special, too. Presented here from youngest to oldest. (As always, links support the lovely indie where I work as the kids’ buyer. We ship!)

END_OF_DOCUMENT_TOKEN_TO_BE_REPLACED

Better Together (Maybe for the Apocalypse, Too?)

A year or so ago, I was at a summer garden party, all twinkling lights and umbrella drinks, when the conversation took a dark turn. Several folks, none of whom I knew terribly well, began to discuss and debate the provisions they had stored away in the event of an apocalypse. I sat quietly, picturing my own basement with its boxed wedding dress, foosball table, and toys I’d stashed hoping my kids wouldn’t notice so I could gradually move them to the donation bin, and realized how far a cry this was from the scene being described. No crates of non-perishable food, no industrial sized jugs of water, no iodine pills in the event of a nuclear attack, no walkie talkies, no axes, definitely no guns to take down squirrels that could comprise my protein quota.

“Don’t you worry about how you’re going to protect your family?” someone said to me, after I tried to make a joke about my foosball table. I conjured up an image of myself, defending my children against other crazed survivors—all of us presumably reduced to looters or murderers—and I said, only half joking, “In the case of an apocalyptic event, I think it would be best for the future of humanity if my family made a quick exit.” To put it mildly, living off the land in the dark and cold for an extended period of time isn’t really in our wheelhouse.

Last month brought a fresh wave of worry for those of us working hard not to picture End of the World scenarios. We were on the brink of a war with the Middle East. The continent of Australia was burning. A mysterious and deadly virus was (is) rapidly spreading out of China. If we believe apocalyptic-themed fiction, it’s not long until we will be wandering alone in the dark and cold, assuming we are unlucky enough to survive.

And yet, at a time when the news threatens to send us into an ethos of fear and anxiety—to fathom ways of constructing safe houses around our loved ones—children’s literature is there, reliably, with a hefty dose of optimism, a welcome respite from the dark and cold. Especially where gems like Hannah Salyer’s debut picture book, Packs: Strength in Numbers (Ages 5-9), are concerned, we would do well to remember that the animal kingdom has always survived when it turns towards, not away, from one another.

END_OF_DOCUMENT_TOKEN_TO_BE_REPLACED

The Easter Chick Has Nothing On These Goslings 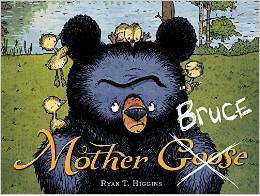 Easter quickly approaches, and the race to fill Easter baskets is on. Chocolate bunnies and Cadbury eggs line the grocery checkout aisles. Toy stores have Easter displays with irresistibly soft plush chicks, some of which even peep when you drop them. Bunnies and chicks, chicks and bunnies: this is what the commercial side of Easter preaches.

If we are talking books—which every Easter basket needs—the perfect bunny-themed choice is, without question, The Country Bunny and the Little Gold Shoes, which I wrote about here (and which—sound the trumpets—happens to be available in a petite basket-fitting edition that comes with its own golden CHARM).

As for covering the chick quota—well, I’m going to go out on a limb and tell you to scrap the chicks this year in favor of the gosling. Specifically, the incredibly cute and insufferably stubborn goslings of Ryan T. Higgins’ Mother Bruce (Ages 3-8), a modern-day spoof on the age-old nursery rhyme. END_OF_DOCUMENT_TOKEN_TO_BE_REPLACED

News flash: right now, under your very own backyard or front porch, there could be as many as 20,000 garter snakes huddled together, using the body warmth of one another to wait out these cold winter months. SAY WHAT? If you think I’m exaggerating, I’m not. And now you, too, can be reminded of said news flash by your seven year old every morning as you leave the house. All thanks to one of twelve poems in Winter Bees & Other Poems of the Cold (Ages 6-12), the latest lyrical and visual masterpiece by poet Joyce Sidman and printmaker Rick Allen.

Thankfully, Winter Bees IS a masterpiece, so you won’t mind reading about snakes, which may or may not be lurking in “hibernaculums” beneath the ground on which you tread (if you remember, our snake obsession started here). Thankfully, too, most of the poems in Winter Bees are more beautiful than creepy, inspiring awe for animals like tundra swans, moose, beavers, moles, and chickadees, as well as frosty events, like ice crystal formation. END_OF_DOCUMENT_TOKEN_TO_BE_REPLACED

Our weekend was a flurry of Valentine-making, as my children colored, traced, and cut out hearts for the kids in their classes. While my four year old has to make 20 Valentines, one for each person in her class, my seven year old’s class is doing “Secret Valentine,” where each child draws a name at random and then makes and does things for that person over the course of two weeks. Both kids are giddy with pride in their work and excitement over the upcoming celebrations. (It turns out that my daughter cuts at the speed at which she chews, which is to say that next year we need to start this project three months earlier.)

For the past two years, in honor of V-Day, I’ve given you gift suggestions of friendship books: sweet, beautifully illustrated stories, like Lovabye Dragon, Paul Meets Bernadette, and Brimsby’s Hats, where loneliness dissolves in unexpected arrivals and generous acts. This year, I was going to break with this tradition. END_OF_DOCUMENT_TOKEN_TO_BE_REPLACED

The Magic of Fall

The other evening, after cleaning up from dinner, I walked into the living room to find JP sticking his nose out the mail slot of our front door. “Mommy, I can smell winter coming! I forgot how delicious it smells! I thought I wanted summer to stay, but now I want winter to come!”

Perhaps because of my children’s innate excitement around seasonal transformations, or perhaps because of wanting to sway my own ambivalence about the onset of winter towards something more positive—either way, I have always had a special place in my heart for stories about fall (remember Fletcher and the Falling Leaves?). This year, I have discovered my most favorite presentation to date. It’s not a story. There are no frantic animals preparing for hibernation (see Bear Has a Story to Tell), or children frolicking in pumpkin patches (although you should still read Otis and the Scarecrow). Rather, there is a simple phrase on each page, accompanied by a stunning picture, and the meaning lies in the intersection between the two.

Fall Leaves (Ages 4-8), by Loretta Holland, with illustrations by Elly MacKay, is one of those picture books that can be enjoyed on multiple levels. At its simplest, it reads as a kind of lyrical, free verse poem, with one line per page. But each phrase is also a kind of headline, with a smaller-print paragraph below, containing detailed and carefully chosen information about a unique aspect of fall, like the migration of birds, the hibernation of perennials, or the heavy downpours (am I the only one who is consistently blind-sided by these rainy days, assuming every morning is going to bring a bright cloudless sky against which to pick apples and pumpkins?). END_OF_DOCUMENT_TOKEN_TO_BE_REPLACED

In Honor of the Dads 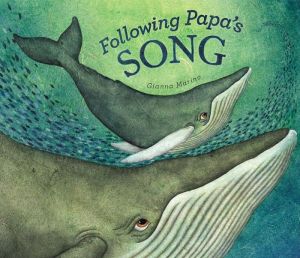 This month marks 20 years since I lost my father: my hero, my biggest supporter, the first Big Love of my life. I find that, as my own children get older, and I get to share in their many milestones (just this spring, JP learned to ride a two wheeler, scored his first soccer goal, and passed his deep water test), I am filled with a new kind of sadness over how much my Dad has missed out on as a parent himself.

Following Papa’s Song (Ages 3-6), a new picture book by Gianna Marino, is a stunning and poetic tribute to the father-child relationship. END_OF_DOCUMENT_TOKEN_TO_BE_REPLACED

You are currently browsing entries tagged with migration at What to Read to Your Kids.