When They Want the Truth

When I was eight, I led my father into our coat closet, pushed aside the coats to make a small opening, closed the door, and sat him opposite me on the floor. As we both hunched uncomfortably, I handed him a piece of torn notebook paper and a pencil. On the paper was a list of every swear word I had ever heard. “I want you to write down what each of these words mean,” I said. “Please,” I added, so as not to sound bossy.

I’ll never forget the way my dad didn’t miss a beat. As if this was a natural ask from a firstborn. He didn’t speak, just wrote down a word or two beside each of mine. When he was finished, he handed me the list, and that was that. We stood up, opened the door, and went our separate ways.

In the safety of my bedroom, I got up the nerve to look at what my father had written. It may have been the most anticlimactic moment of my life to date. Female dog. Human feces. I’m sure there were others, but I can’t remember the complete list. I stared in disbelief. I wasn’t entirely sure what all of them meant (what the heck was feces?), but I did know they didn’t sound particularly harmful, certainly not worth the drama which ensued each time someone used one of them at school.

In that moment, I also knew I wasn’t getting the whole truth. I thought the answer was in my father’s pencil strokes, but what I failed to realize was that I actually craved a conversation with him. I wanted to understand what was so terrible about these words. I wanted to understand why they were used the way they were. Looking back, I even wish he had explained some of the gender politics behind them. But I didn’t know how to make any of that happen.

In an effort to demystify these words for me, my father stood in the way of my more fully understanding the world I was sharing with him.

For children, it’s a fraught and common dilemma: they want the truth, but well-meaning parents assume they’re not old enough to handle it. As a parent myself now, I’m often withholding details about things like school shootings or terrorist attacks, hoping the questions won’t keep coming. The temptation to protect our children by sheltering them is wired into us. Still, I’ve never let go of that unsettling feeling as a child that your parents aren’t telling you everything, that no one’s helping you clear the haze in front of your eyes.

The quietly determined five-year-old protagonist of Captain Rosalie (Ages 6-9), growing up in the shadow of World War I, yearns desperately for the truth. She wishes to understand the truth about her deployed father, serving on the frontlines and sending occasional letters. She wishes to understand why the words her mother speaks are so often at odds with the expression on her face.

Written by Timothée de Fombelle and first published in France in 2014, this poignant 60-page picture book-novella hybrid has recently been translated into English by Sam Gordon and published in an intimate square-trim format, with illustrations by the always exquisite Isabelle Arsenault. It’s a book ripe with contrasts: the grey of the winter landscape contrasted with the fiery red of Rosalie’s hair; the destruction of war contrasted with daily discoveries inside a schoolhouse; the coldness of uncertainty and fear contrasted with the warmth of a mother’s embrace.

My eight year old took this book to France with us early in the summer, where she devoured it twice: once in a flat overlooking Notre Dame and again in a Provencal town. Both times she assured me the book was “too sad” for me to read. (A rather surprising comment coming from the child who sometimes seems to have ice in her heart…who knows, maybe the French got to her.) And yet, she seemed to adore it.

The week before school began, I walked into our family room to find her reading Captain Rosalie again. “It’s still very sad,” she said. “But maybe you should read it.” I read it silently later that night, and I’m not sure if the tears I shed were more owing to the bittersweet story, or to the fact that I had missed the opportunity to share such raw, beautiful writing aloud with my daughter. Captain Rosalie would make a perfect read aloud, so astutely does it capture the universal tension that exists around the truth. Can we know it? Should we know it? What happens after we know it? 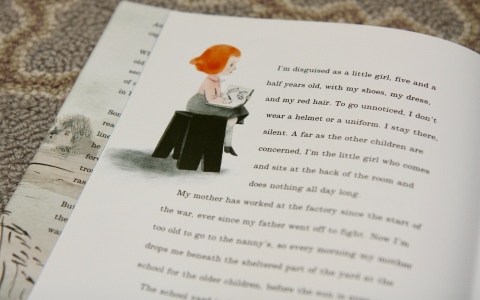 While Rosalie’s father is deployed, her mother works long hours at a war factory. The mother arranges for a local teacher to keep an eye little Rosalie during the day, while he presides over his classroom of young men (“Since coming back from the war, he has only one arm. But he smiles as though having just the one is quite something.”). As Rosalie perches on the bench at the back of the classroom, her head brushing the coats hanging above, she appears to be preoccupied with childlike scribbles in her notebook. She appears to be daydreaming. Really, though, she is watching. She is planning. This girl—like so many children—misses nothing.

I have a secret…I am a soldier on a mission. I am spying on the enemy. I am preparing my plan. I am Captain Rosalie.

Rosalie’s secret mission isn’t merely pretend play born of the jargon she hears around her, at a time when no one talks of anything but war. No. Rosalie’s mission, it turns out, is to unpack the secret of her mother’s pain. Each evening at bedtime, while Rosalie’s mother reads aloud letters from the father—his hopes and dreams for the future, his memories of the last time father and daughter played together—Rosalie fidgets and pulls away. She may not be able to read the words on the paper, but she knows her mother has filled the room with more words than could possibly fit there.

I try not to listen…I don’t want to hear any talk of fish leaping in streams. I don’t believe in stories of walnuts and mills. 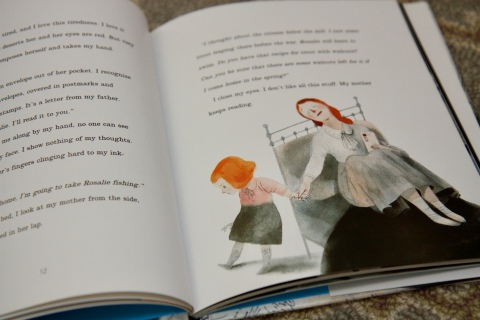 The only part of the letters which seems truthful are the rough sketches along the edges: “a forest in the distance and the land in the foreground all churned up, with soldiers hiding in holes.” Rosalie recognizes her father’s hand in these drawings, reminiscent of ones he drew for her in the window mist on his last visit home.

Then, one evening following a snowstorm, a telegram comes to the house. Afterwards, Rosalie’s mother stops reading the letters aloud, even hides them altogether. Soon, she stops looking at Rosalie.

She has changed. When she drops me off at school in the morning, I’m almost relieved to see her go. She walks off, shuffling, even though the ground is no longer at all slippery. 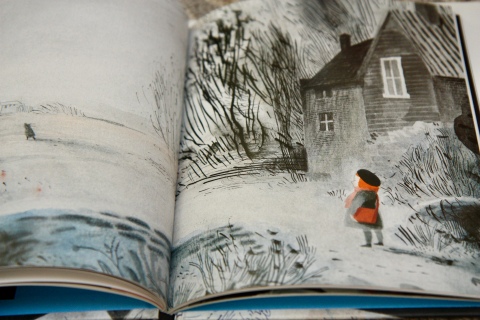 Rosalie kicks her mission into high gear: “We’re counting on you, Captain,” she tells herself. From her position in the back of the classroom, she secretly studies the markings on the blackboard with even greater determination. When later her hand shoots up to answer the teacher’s question, we’re as shocked as the older children who turn around to face her: five-year-old Rosalie has taught herself to read.

The reality of wartime is that the truth comes hard and fast, even to those too young to hear it. Still, the tone throughout Captain Rosalie is as soft and gentle as the furry beret atop Rosalie’s head, as reassuring as the crocheted blanket under which mother and daughter cuddle. Sweet, brave, feisty Rosalie is not broken by the truth. She’s emboldened by it. She awakens to the truth, and this truth allows her to reach the person she needs most. “She steps forward and takes me in her arms, and I cry with her.” Ironically, by shouldering this adult secret, Rosalie is free to be a child again.

Review copy by Candlewick. All opinions are my own. Amazon.com affiliate links are above, although I prefer that we all shop local when we can!

§ 2 Responses to When They Want the Truth

You are currently reading When They Want the Truth at What to Read to Your Kids.