Achieving Agency (with Help from Our Inner Crocodile)

March 8, 2018 Comments Off on Achieving Agency (with Help from Our Inner Crocodile)

When was the last time we had all this “help” thrown back in our faces with a crocodile-sized chomp?

I am halfway through one of the most compelling parenting books I’ve ever read. In The Self-Driven Child, clinical neuropsychologist, William Stixrud, along with motivational coach, Ned Johnson, make a convincing case for what our children need most from us. Drawing from personal experience and brain science, they argue that the main driver behind children’s well-being isn’t grades, or where they go to school, or what things they have. Rather, it’s how much control children perceive as having over their lives. Do they feel they can direct their lives in a meaningful way? Do they have the freedom to make mistakes and learn from them?

“Agency may be the one most important factor in human happiness and well-being,” the book puts forth.

Perhaps more than we realize, we parents get in the way of our children developing their agency. We don’t mean to, of course. It’s just incredibly hard to sit back and watch our kids potentially sabotage friendships, tests, or the chance for future success. Maybe we want them to do what we did because it worked out so well, or maybe we’re hoping to save them from making the same mistakes we did. In any case, Stixrud and Johnson write:

So often, parents want to play Edward Scissorhands and start pruning their child like a tree, but the reality is that your tree has just begun to grow, and you don’t even know what kind of tree it is.

Sometimes, I would add, we “prune” our children without ever saying a word.

A few weeks ago, I attended my seven-year-old daughter’s “student-led conference” at her Montessori school, where she presented some of her recent work. To kick off the night, she shared a written “self-assessment,” in which she had noted her temperament, values, and interests. On one page was a list of “strong likes” and “strong dislikes.” Under the likes column, she had listed her brother, her father, and me (phew)—along with chocolate cake, polar bears, Helen Keller, and a few other things I couldn’t make out. Under dislikes, she had put “peppers.”

Ok, wait. My daughter packs her own lunch every morning. More often than not, she puts in red peppers. “You don’t like the red peppers you pack for lunch everyday?”

“I hate them,” she replied matter-of-factly.

“You put them on the counter, so I know you want me to. It seems important to you.”

Clearly, in their book, Stixrud and Johnson are talking about bigger things than bringing peppers for lunch. Or are they? What would have happened if my daughter had complained about packing peppers for lunch one morning? Would I have interpreted it as whining and glared at her in exasperation? Would I have passive-aggressively suggested she pack carrots instead, knowing how little she cares for those? Would I have barked, “They’re already out. Just pack them so you can hurry up and eat your breakfast.” Did she have any choice but to wait until we were on her turf to deliver this information?

I immediately thought about the heroine in Princess Cora and the Crocodile (Ages 5-9), the delightfully funny but astutely provocative early chapter book by award-winners Laura Amy Schlitz (three words: The Night Fairy) and Brian Floca. Published last year and enjoyed countless times in our house since then, Princess Cora and the Crocodile suddenly seems like the perfect, if hyperbolic, meditation on what it means to give our kids agency—before they have to go and unleash their inner crocodile.

You might say our protagonist, Princess Cora, has an agency problem. Meaning she has none. Her well-meaning royal parents have micromanaged every aspect of her life, beginning moments after her birth, as soon as they remember she will someday be queen. “They stopped thinking she was perfect and started worrying about what might be wrong with her. By the time she was seven years old, there wasn’t a single minute when Princess Cora wasn’t being trained.” Training, pruning: in this case, it’s the same thing.

As it turns out, Cora has grown increasingly resentful about her life in the royal castle. The nanny insists she takes, not one, but three baths a day. (“The nanny thought that being clean was the most important thing in the world.”) The King, determined that Cora grow up to be physically strong, stands over her with a stop watch, while she jumps rope in circles across the floor of the dungeon-now-gym. (“Princess Cora knew that skipping rope was good for her, but that didn’t make her like it any better.”) And the Queen only allows her to read books about running a successful kingdom. (“The books were so dull that Princess Cora yawned until her eyes were full of tears.”)

Why doesn’t Cora say something? Well, she tries. Sometimes, while reading books, she “asked silly questions, just to liven things up.” But then she’s criticized for being “inappropriate.” Sometimes, while asked to jump rope, she starts to protest. But then her father puts on a sad face and asks her, “Princess Cora, are you being a good girl?” To which it is assumed there should be only one answer.

Where questions of agency are concerned, it seems girls have it all the harder, feeling pressure to bend not only to parental demands, but also to society’s expectations. Girls, after all, are supposed to be “good.” To be polite and well-mannered. To never be loud or bossy or messy or angry. To never hurt feelings.

So, Cora does one of the few things allowed of heroines in fairy tales. She writes to her fairy godmother. In this case, the protocol for contacting one’s fairy godmother—my daughter loves this part—is to write a letter, tear it up, and leave it on the window ledge, where each of the scraps turns into a white butterfly and flies away. 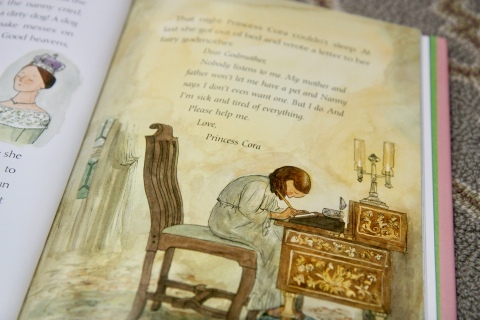 Cora writes specifically of her wish for a dog (“a dog wouldn’t tell her what to do”), but she finds something much larger at the foot of her bed the next morning. A crocodile. And not just any crocodile. A crocodile who triumphantly exclaims, “I’ve come to rescue you from your awful parents and your mean nanny.” A crocodile who seems every bit the opposite of the neat, quiet, polite princess. (Or is he?) Did I mention this crocodile bites? That he leaves a wake of destruction in his path? That he says things which are very, very rude? That he demands cream puffs all day and night?

The princess and the crocodile hatch a plan: Cora will run away and experience life outside the castle walls, while the crocodile will stand in for her, donning a dress and a mop for hair. (Cora assures him her parents aren’t very observant.)

What follows is a most entertaining juxtaposition: the sweet revelations of Cora’s tromp through nature, interspersed with the uproarious physical comedy of the crocodile wreaking havoc back home. While we might guess where this is going, the delight comes from the delicious details in Schlitz’s narrative and the whimsy of Floca’s drawings.

Cora climbs trees, stuffs herself full of freshly-picked strawberries, and walks barefoot through cow patties (at first thought, “Ew ew ew;” at second thought, “I’m having an adventure!”). Her petticoats rip and her cheeks pink up. 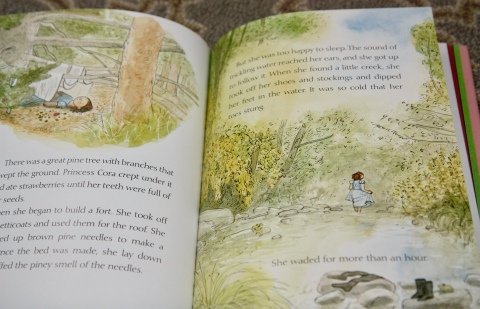 Back at the castle, the crocodile starts by turning the bathroom into a water slide and tossing Nanny into the bath. Later, bored of his reading lesson (the Queen initially assumes she is talking to Cora), he balances the ink pot on his nose until black splotches cover the table; swings from the chandelier; taunts the Queen with “bad rhymes;” and nips at her ankles. Finally, he chases the King around in circles and ties him up with the skipping rope.

“I don’t want to be a good little girl,” the crocodile declares. “I want to be a bad crocodile. And what’s more, I am one!” And that, of course, is when we realize that the crocodile is none other than a metaphor for the anger and rebellion—the maleness, if you will—which good girl Cora has tried so many years to repress.

As we expect, Cora eventually realizes that she misses her parents, and she decides to return to the castle. Only this time, it’s on her terms. As it turns out, the King and Queen and Nanny have also had a change of heart. (After getting locked in the library, the Queen realizes just how boring her books are and throws them out the window.) The grown-ups begin to do something they have never done before: they begin to listen to Cora. This time, she talks clearly, convincingly, and assertively. (“This time Cora didn’t hang her head or turn red or burst into tears.”) Cora speaks of her interest in reading about “sharks and tigers and fairies”; in climbing trees and learning how to juggle; in taking baths but only after getting very, very dirty. To their surprise, her parents discover that Cora’s overall goals for herself aren’t dramatically different from the ones they have for her; it’s only that she has different ideas about how to achieve them. 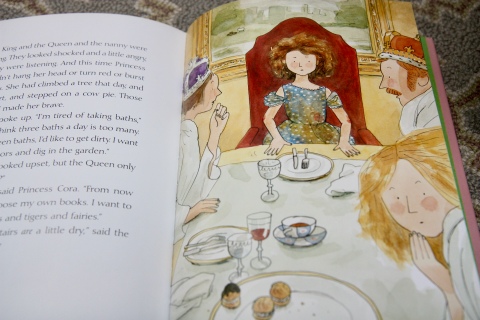 The Self-Driven Child raises the unsettling question, “If we’re unable to accept our kids as they are, how can we expect them to accept themselves?” The authors challenge us to listen, really listen to our children. They suggest, what if instead of steering our children down a path we deem best, we begin seeing our job as one of “consultant”—helping our children see the pros and cons of a decision but then, ultimately, leaving that decision up to them? After all, if we accept our children as they are, perhaps they won’t feel the need to unleash their inner crocodile just to get our attention. Perhaps they can embrace all aspects of their personality, not just the ones society tells them are most “appropriate.”

After a brief hiatus, Emily has started packing peppers again in her lunch. Maybe her hatred is softening, or maybe it’s just on her terms now.

(And no, I’m not going to tell you what becomes of the crocodile.)

Did you enjoy this post? Make sure you don’t miss any others! Enter your email on the right hand side of my homepage, and you’ll receive a new post in your inbox 2-4 times a month.

Review copy provided by Candlewick. All opinions are my own. Amazon.com affiliate links support my book-buying habit and contribute to my being able to share more great books with you–although I prefer that we all shop local when we can!

You are currently reading Achieving Agency (with Help from Our Inner Crocodile) at What to Read to Your Kids.