One of the joys that comes from sharing a special series with your child is that, over the months that it takes you to finish, you come to feel like these beloved fictional characters have in some meaningful way become your friends, are part of your collective consciousness. Not only that, but you start noticing ways in which these stories have altered the way you—or your child—sees the world.

Since this summer, Emily and I have been making our way through all four books of “The Doll People” chapter series (Ages 7-10, younger if reading aloud), by Ann M. Martin and Laura Godwin. Now that the fourth book is finally available in paperback (plus a new Christmas picture book to boot), I can’t think of a better bundle of books to gift the doll lover in your life. It’s that rare combination of old-fashioned charm and contemporary relevance. Furthermore, the books are so intricately and delightfully illustrated—the first three by Brian Selznick and the fourth (plus the Christmas special) by Brett Helquist—that they are almost too special not to own.

Based on the always popular premise of toys-that-come-to-life-when-no-one-is-looking, Martin and Godwin’s series, set in the present day, stars a family of antique porcelain dollhouse dolls, each hand painted in England over one hundred years ago, who currently resides in the bedroom of an American girl named Kate. In the hands of Kate (or, more dramatically, her rambunctious toddler sister, Nora), the dolls are kept busy enough; but the real draw of the stories are the daring, unpredictable, and at times even outlandish adventures that the dolls have when their humans are out of the house or asleep (not unlike this other favorite series).

The majority of these edge-of-your-seat adventures are undertaken by Annabelle Doll, the eldest child of the porcelain family, in cahoots with a modern plastic bendy doll named Tiffany Funcraft, who midway through the first book comes to live in Nora’s room with the rest of her family in the (mass-produced) Dream House Model 110. At first glance, the two girls couldn’t be more different—and illustrator Brain Selznick does a fantastic job of juxtaposing Annabelle’s old-fashioned elegance with Tiffany’s blunt, oversized features—but, as we as readers quickly discover: in these books, things are rarely as they seem.

Woven through every page is a richly imagined doll culture, at the heart of which likes “The Doll Code of Honor,” an oath taken by all “living dolls” to ensure that the human world will never learn of their lives beyond the last place their humans left them. Keeping quiet when you’re dying to relate something to your best friend (but your human is around); remembering to return to the exact spot you were left (before your human catches you absent); not doing anything about your green paint-smeared hair or the itchy sweater your human attempted to knit you (because you might raise suspicion): these are no easy tasks, though failing to heed them carries with it the dangerous consequence of so-called “Doll State” (or, even worse, “Permanent Doll State”), by which a living doll is immediately transformed into an ordinary, boring, non-living doll.

“The thing I keep wondering, Mommy,” my daughter pronounced one night at bedtime about two weeks after we had started the series, “is whether my dolls come alive when I’m not around. I just can’t decide about this.” More than once, I’ve seen Emily slowly peering around the toy room door, as if hoping to catch her dolls in action. It’s funny: I can remember doing this same thing growing up, sneaking sideways looks at the row of stuffed animals that lined a wicker sofa in my bedroom, wondering if I could detect just the slightest movement.

You might wonder how such a premise could sustain originality for four long, meaty chapter books. But if you think Martin and Godwin wrote over 1,000 collective pages rehashing the same squabbles or near misses (there are only so many times you can narrowly avoid falling into the jaws of a pet cat, or wrestle yourself up a human-sized staircase in time to be back in your miniature bed by morning), you’d be wrong. While the first book, The Doll People, is largely concerned with Annabelle and Tiffany’s adventures at large in their humans’ house—specifically with their quest to find Annabelle’s Auntie Sarah, who mysteriously disappeared from the dollhouse back in 1955 and whom the girls suspect to be trapped in the spider-infested attic—the other books find innovative excuses to get the dolls out into the greater world, with the understanding that they must always return to their rightful home in the end. 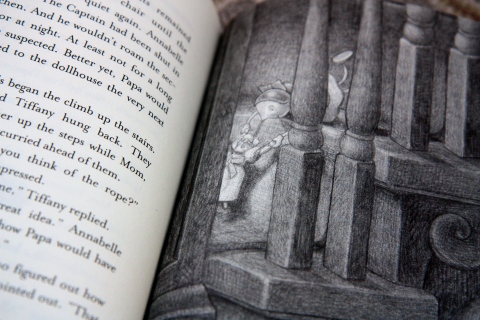 In The Meanest Doll in the World, the second (and darkest) in the series, Annabelle and Tiffany explore Kate’s backpack one night and inadvertently end up accompanying Kate to school the next morning. Because their curiosity always, always gets the better of them, they climb out of the backpack and discreetly explore Kate’s classroom during the day—and yet, when the time comes for them to climb back into the backpack, they mistake Kate’s for another and end up going home with the wrong girl. Even worse, the dolls in this new child’s bedroom are engaged in an ongoing turf battle to fend off Mean Mimi, a loud, aggressive, arguably deranged doll whose small size belies a dangerous threat to Dollkind. I won’t lie: Mean Mimi will send a few shivers up and down your child’s spine, at the same time potentially unleashing some productive conversations about bullying in your house, before the story comes to a most satisfying end.

In The Runaway Dolls, my daughter’s personal favorite of the bunch, Annabelle convinces Tiffany to run away from their families, an idea which sounds better in theory (doesn’t it always?). When the girls regret their decision and try to wind their way home through the suburban boulevards, they—along with their brothers, who end up coming after them—end up lost inside a dark stretch of forest. When they again reach civilization, they must spend several days with an eccentric cast of toys in a department store—adventures that include a tense run-in with a Doll Hospital—before ultimately finding their way home again.

In The Doll People Set Sail, the two doll families find themselves in the greatest pickle to date. (Even I had trouble figuring out how they were going to get themselves out of this one.) When Nora and Kate are asked to pack up their bedrooms for a home renovation project, they mistakenly put the box holding both sets of dolls in the donation pile, rather than with the boxes to be stored in the attic. Before the dolls know it, they are aboard a speeding transatlantic cargo ship bound for the UK. If that wasn’t bad enough, a hole in the box proves to be the demise of three family members, who tumble out during the loading process—and whose whereabouts on the ship (assuming they haven’t fallen overboard!) remains unknown. Annabelle and Tiffany must organize a reconnaissance and rescue mission, but even if they can recover their doll family members, how will they get back to the States and home to their beloved humans? (Three cheers for a series about girls and dolls that frequently defies stereotypes of passivity: there is no sitting around waiting for something to happen in these pages!)

While adventure and drama abound in these stories, the greatest pleasure in sharing this series with a child comes from witnessing Annabelle’s emotional growth. Annabelle is keenly aware of the limits of her physical being: she is, by definition, fragile. In contrast to Tiffany’s Flexi-Bendy (trademarked) body, Annabelle cannot afford to take the careless physical risks that come so easily to her friend. And yet, Annabelle begins to understand that our appearances need not define our character. Time and time again, Annabelle surprises herself by being the bravest of the brunch: her curiosity about the world (including a fondness for natural science—spiders won’t stop her!), her love of reading, her cleverness, and her fierce loyalty to her family and friends transform her into the kind of quiet but persuasive leader that I would be proud to admire someday in my own daughter. 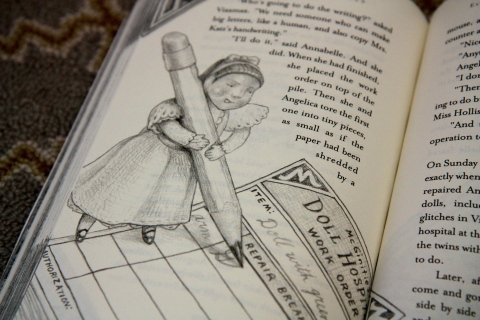 Annabelle also learns more than a thing or two about friendship (this is, after all, the Ann M. Martin of The Babysitters Club that we’re talking about). She and Tiffany may strike up an unlikely friendship, but the ups and downs that their friendship takes is anything but unlikely. Learning to listen to one another, to allow for compromise, to quarrel and make up, and to help a friend recognize her best qualities: all of this is in these stories in spades, and I would venture to say that we could all benefit from such thoughtful and thorough musings on friendship.

The more time we spend with these dolls, the more we see them as living, breathing characters—people who share the same hopes and worries, confidences and insecurities as we do. There’s little in these wild adventures that can be tossed up to luck: every success is won through a combination of determination, resourcefulness, teamwork, and love. We invite these characters into our hearts and hope that they leave a little piece of themselves there.

On a walk recently, Emily stopped in front of a tree with an especially large knot hole. “Yup,” she said, “that’s what I thought.” She explained that this was the secret gathering place for a few of her stuffed animals during the day, while she was off at school. “Oh yeah? What do they do there?” I asked.

After all, life is a lot more exciting when you start imagining what might be happening under your very eyes.

Books published by Disney Hyperion. All opinions are my own. Amazon.com affiliate links support my book-buying habit and contribute to my being able to share more great books with you–although I prefer that we all shop local when we can!

You are currently reading Gift Guide 2016 (No. 2): For the Doll Lover at What to Read to Your Kids.