I am rarely at a loss for words. But, in thinking about how to recommend Melissa Sweet’s Some Writer! The Story of E.B. White (Ages 8 to adult), a 158-page tribute to one of children’s literature’s most enduring legacies, I find that I am. You see, I would like to reproduce nearly every one of White’s sublime quotations peppered throughout this biography—of which there are too many to count—yet doing so without Sweet’s exquisite accompanying collages would feel bereft. Plus, in the chapter dedicated to White’s rewrite of The Elements of Style, the tiny but quintessential guide to writing originally penned by his former Cornell professor, William Strunk, White makes clear his disdain for “needless words.”

So, in the spirit of White, and because Melissa Sweet’s biography of the writer stands alone in absolute perfection, I will attempt to keep my words (somewhat) brief. I encourage you to experience this marvel for yourself—that is, before you gift it to an aspiring child writer, or to anyone with a fondness for boating, impeccable grammar, farm animals, New England, and manual typewriters. 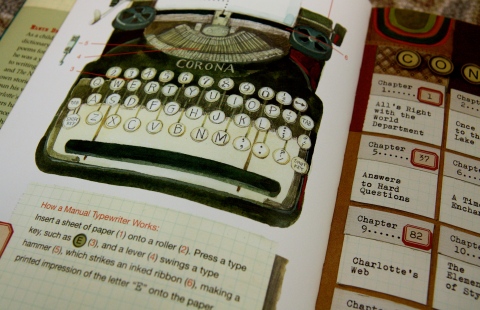 Before this biography landed in our hands, my family was already engaged in a love affair with E.B. White. Or, should I say, with his voice. Last summer, on a road trip from Virginia to Maine, we listened to E.B. White’s recording of The Trumpet of the Swan, his third and final novel for children, about a boy named Sam Beaver and a trumpeter swan named Louis, “who has a speech defect—along with other problems, including a money problem” (this was White’s description, upon submitting the manuscript to his editor, Ursula Nordstrom). Then, this fall, we listened to White read Charlotte’s Web, by many accounts his “magnum opus,” a story of the redemptive friendship between Wilbur the pig and the grey barn spider Charlotte (Nordstrom suggested he change only one word before publishing it). Both The Trumpet of the Swan and Charlotte’s Web were already familiar to us—my kids had heard them in school and at home. And yet, listening to White read them in the car, it was as if we had on fresh ears.

White’s voice, like the man behind it, is unassuming yet commanding. Gravelly yet gentle, even but never boring, his voice is like that of an old family friend, who sits back in his chair after dinner to weave a story—and to whom you find yourself drawing closer and closer. White doesn’t employ fancy inflections for the characters: in the spirit of his New England accent, he speaks as a matter of fact. We are left with the nakedness of his words—and perhaps just a hint of underlying amusement about the events they relate—and these words themselves awaken in us awe, startle us to laughter, and move us to tears. (My son was consoled to learn he was not alone in his tears: in recording Charlotte’s Web, it took White seventeen takes to get through the chapter in which Charlotte dies.)

In listening to White read his stories, we marveled at the new details we noticed, like the juxtaposition between the dramatic pontifications of Louis’ cob father and the economical practicality of his mother; or the diverse cataloging of Wilbur’s slop meals. Then, in reading Some Writer! (its title an allusion to Charlotte’s praise of Wilbur in her web), we developed a greater appreciation for these observations. It turns out that Louis’ father was modeled after White’s own father (“Father…didn’t hesitate to say in twenty words what could be said in six.”). Similarly, the detailed descriptions of Wilbur’s life stemmed, not only from White’s intimate familiarity with farm chores, but from heartbreak after his own pig died from disease. When White was giving input into the movie adaptation of Charlotte’s Web, he cautioned the director that “the film should be a paean to life, a hymn to the barn, an acceptance of dung.”

While certainly my children’s favorite part, the attention to Charlotte’s Web, The Trumpet of the Swan, and Stuart Little (White’s first children’s book), comprises only three of thirteen chapters in Sweet’s book. Taken as a whole, the book reads like a traditional biography, beginning with White’s birth in 1899 outside New York City (born Elwyn Brooks White, he went by Andy all his life, and Sweet invokes his first name throughout the book in a fitting nod to his modesty) and ending eighty-six years later on White’s beloved farm in Maine.

My son—on the heels of his own summer vacation in Maine—took a keen interest in White’s first encounter with Maine, during his childhood summers spent at Belgrade Lakes, initially undertaken on a doctor’s order for White’s hay fever. It was on these chilly shores that White, in the spirit of Sam Beaver, began the observations of the natural world that would later infuse his children’s stories.

With his wife (fellow writer Katharine Sergeant Angell, for whom White composed love poems) and his young son, White settled in Maine, raising animals for food. Writing may have come easily to White, but money never did, especially in the years his beloved wife was ill. Most of what Write wrote—he was a freelance writer for The New Yorker and Harper’s, as well as a prolific letter writer—was not for children, and came out of both his need to make a living and a commitment to presenting life in its grit and glory. White’s innate ruggedness and scrappiness, which we first glimpse in his post-collegiate road trip across the country, comes through beautifully in Sweet’s pages: he never opted for the easy path, but he always acted true to his passions.

White was insistent that, upon death, his farm be sold: he did not want it turned into a museum. Sweet explains that White shunned the notion of author as celebrity, believing that an author’s duty was “to transmit, as best as he can, his love of life, his appreciation for the world.” He wrote of his own work: “All that I can say in books, all that I ever hope to say, is that I love the world. I guess you can find that in there, if you dig around.” Anyone who has read White’s books knows you don’t have to dig at all before you’re marveling at the craftsmanship of a spider’s egg sac, or the stillness of a pond underneath a blanket of ice. It seems to me that, for White, his most meaningful legacy would be for our children to share in this love.

Every Tuesday, my son joins his class on a trail hike through the forest preserve that begins steps from his classroom. This week, the hike took place in the pouring rain. When JP got into the car at pick up, he was bursting with excitement, gesturing wildly from the backseat as he described the scene: “Mom, you would not believe the creek today: it was like rapids! If you tried to walk across it, you would be swept away! We had to hold onto the tree branches because the wind was whipping against our faces, and one kid slipped in the mud on the way back up so we had to stage a Rescue Mission, and the whole time the water was making this crashing sound, and it was seriously the Best. Day. Ever.” If White had been next to me in the car, I believe he would have been smiling. 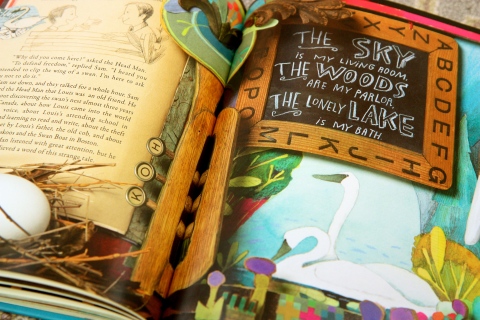 While on the subject of weather, I have to close with one final citation from Sweet’s book, because White’s words seem almost prophetic, given the political, social, and environmental landscape in which we find ourselves, on the heels of this past election. At the same time, his words remind us of the cyclical nature of life, something central to the themes of his children’s classics. This excerpt is from a letter White wrote in 1973:

Sailors have an expression about the weather: they say, the weather is a great bluffer. I guess the same is true of our society—things can look dark, then a break shows in the clouds, and all is changed, sometimes rather suddenly. It is quite obvious that the human race has made a queer mess of life on this planet. But as a people we probably harbor seeds of goodness that have lain for a long time, waiting to sprout when the conditions are right. Man’s curiosity, his relentlessness, his inventiveness, his ingenuity have led him into deep trouble. We can only hope that these same traits will enable him to claw his way out.

Ever the optimist: in his essays and letters and poems and novels, White reminds us that one only has to take a canoe out on a lake at sunrise to experience the good that exists around us.

And this book reminds us that words can sometimes be the greatest gift of all. 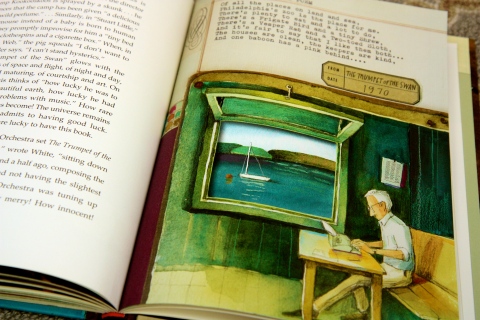 (Well…that wasn’t exactly brief. But you didn’t really think I could pull that off, right?)

Review copy courtesy of Houghton Mifflin Harcourt. All opinions are my own. Amazon.com affiliate links support my book-buying habit and contribute to my being able to share more great books with you–although I prefer that we all shop local when we can!

You are currently reading Gift Guide 2016 (No. 3): For the Aspiring Writer at What to Read to Your Kids.